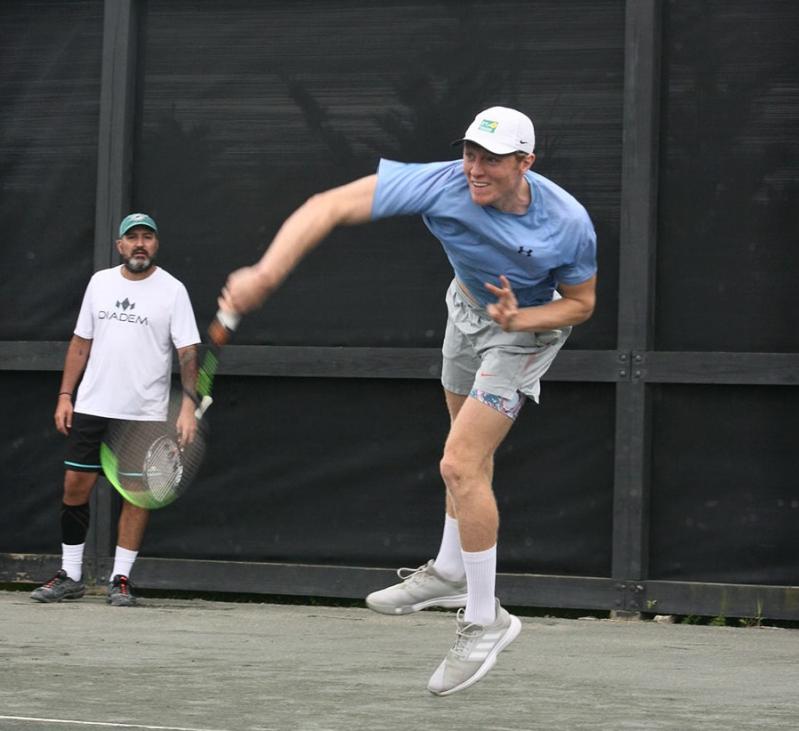 A rapid serve-and-volley crosscourt singles version of doubles tennis was introduced here recently at the Hither Hills Racquet Club. Eighteen top-notch players, several of whom have played on the Association of Tennis Professionals tour, vied for $2,000 in prize money put up by the club's owners, Doug and Kathryn De Groot.

The idea for One-on-One Doubles came to its founder, Ed Krass, "as I was sitting on the beach in Napeague, drinking a Bud, in the summer of 2003," he said. "An hour later, the lights went out all over the Northeast, so it was a memorable day on both counts."

Krass, who lives in Tampa, Fla., and who has coached tennis teams at his alma mater, the University of Central Florida, and at Clemson and Harvard, has been promoting "the third game of tennis" ever since.

The court design features a divisible line extending from the center service line to the middle of the baseline, which keeps the alleys in play.

Professionals have long included crosscourt rallies in practice, but Krass has, with One-on-One Doubles, transformed these drills into "a singles game that stresses doubles skills . . . one that puts a premium on volleying, something that with today's baseline grinders you don't see much of. I'm trying to keep serve-and-volley alive."

The 18 contenders -- Frank Ackley of Springs and Jonny De Groot of Bridgehampton among them -- played on four of the Har-Tru courts at Hither Hills.

De Groot is going into his sophomore year at Cornell, where he hopes to walk on to its men's tennis team, which, because of the coronavirus pandemic, did not compete last year. Ackley, seventh-ranked nationwide in singles and fifth in doubles in the United States Tennis Association's 70s division, was, at 72, the eldest there by about 30 years, but loved the format.

"I don't want a handicap," he said when this writer suggested he might want one in the pool play that determined the semifinalists. The bang-bang crosscourt exchanges were "making me a better player," he said. "There's no time! You have to react. A short block is all you have time for."

Looking about him at the laser-like serve returns and volleys, the balls pinging off their tightly strung rackets, he said, "You know, you don't get to see so many good players like this in the Hamptons."

Single sets with no-ad scoring and tiebreakers were contested in pool play with a bonus point tacked on whenever a volley or an overhead was hit beyond the reach of the opposing player.

Neither De Groot nor Ackley made it out of pool play, though "they were competitive," Krass said afterward, as was Jack Kennedy, a 13-year-old from Huntington, who was a boys 12 division semifinalist and a doubles champion at the Easter Bowl tournament in San Diego this spring.

Kushnirovich, who won $1,000, had defeated Guillerme Demedeiros, a teaching pro at the Sportime club in Amagansett, 6-2 in one semifinal, and Schnur had edged Harrison Adams, also a former A.T.P. player, 6-5 (10-6) in the other.

Schnur received $500 as the runner-up, and Adams and Demedeiros each received $250 for winning their pools.

The elder De Groot later said he loved the format, which "adds doubles skills to the singles game. Grinders wouldn't do well in this -- they wouldn't be comfortable at the net. I liked what Gary said afterward. He said this kind of competition helps to round out players' games."

"You may think of Djokovic as the game's biggest grinder, but at Wimbledon they found he came to the net 7 percent of the time, while the others came in 4 percent. A sharp volley can end a point and save your energy for the next."

De Groot added that he hoped to have One-on-One tournaments at Hither Hills and at the Buckskill Tennis Club in East Hampton, which he and his wife also own, next summer.