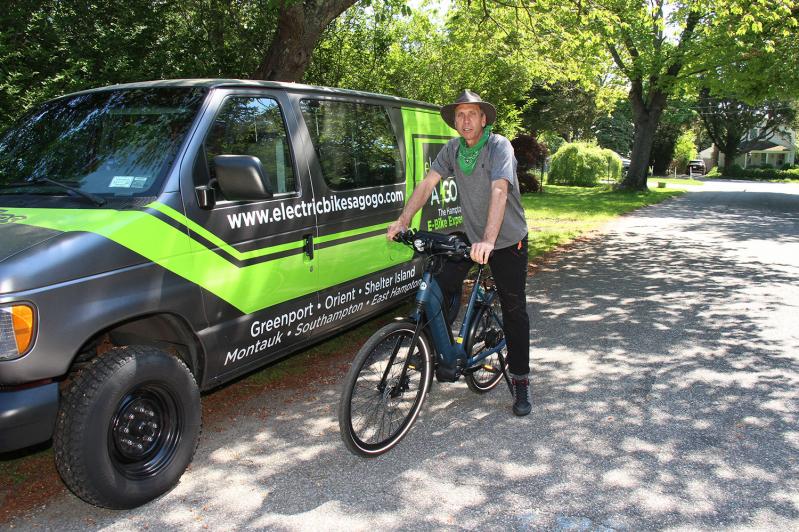 Andy Morris of Electric Bikes A Go Go delivers bicycles for test rides at home and to set locations for guided tours to Montauk, Sagaponack, and Shelter Island.
Durell Godfrey
By Isabel Carmichael

Andy Morris had already been biking forever when the pandemic hit, so it was only natural for him to ride even more over the past 15 months. And it made sense, too, that he would take his passion a step further by launching Electric Bikes A Go Go, a guided tour business that delivers Royal Dutch Gazelle e-bikes to pre-set locations.

With his new company, which he launches this month, Mr. Morris leads people on two-to-five-hour tours to Montauk, Sagaponack, and Shelter Island, and he makes it possible for people to test-ride a bicycle where they live. Tours include pedal-assist electronic bikes and helmets. They range in price from $125 to $179 per person and are limited to four people 18 and older, with an option for private tours.

The bikes are unisex, meaning they don't have the cross-bar that used to signify a bicycle for men. When people pedal the bike, the motor gives their pedal strokes an extra boost of power, "providing a natural riding feeling that makes it seem like your legs are supercharged!" according to the Royal Dutch Gazelle website.

As a lifelong biker, Mr. Morris has been promoting cycling for many years, and has served in a volunteer advisory capacity for various communities on Long Island, including as part of the Southampton Town Transportation Commission Bicycle Committee. He has also been an eastern Suffolk adviser for the planning and routing of the Empire State Trail extension — the Long Island Greenway — that would connect Manhattan to Montauk via bike paths by 2023.

Citing statistics from Germany and Scandinavia, he said that cities in this country should be thinking of cyclists and pedestrians in new ways, with planning oriented more toward protected bike lanes that are physically separated from car traffic, as well as "safe cycle roads and cycle superhighways." The absence at present of infrastructure means there is room for improvement as the Empire State Trail extension moves forward.

When it comes to electronic bikes, Mr. Morris is something of an evangelist. "I believe e-bikes are the future of personal mobility with incredible benefits to your health and the environment. And they're fun to ride!" he said. "Two-wheelers are 10 times more important than electric cars in order to achieve the goal of CO2-neutral cities. . . . A holistic cycling culture is the key to emissions-free cities with short distances, in which everyone can get to their destination safely."

He feels sure that fellow e-bike enthusiasts visiting the East End from all over the United States and Europe will "be eager to do a tour on my premium bikes."

Mr. Morris was born in Manhattan and grew up in Bayside, Queens, spending summers in the family's house in Hampton Bays. He graduated with a major in fine arts from Southampton College. "My interest in two wheels accelerated into vintage motorcycle restoration with numerous national show winners all over the world." Now his attention is focused on "riding e-bikes all over the world."

In Hampton Bays, where he has lived since 1969, his studio doubles as a gallery for his paintings, many of which end up in private and corporate collections. As a sideline for 20 years, he has been doing mobile auto detailing from Westhampton to East Hampton under the business name Detail Artist — he painted the logo himself.

His latest venture — in part a reaction to the increased interest in biking during the pandemic — is a multipronged effort to make bike tours, bike rentals, and bike sales available anywhere on the South and North Forks that his customers want them. Tours can be booked through his website, electricbikesagogo.