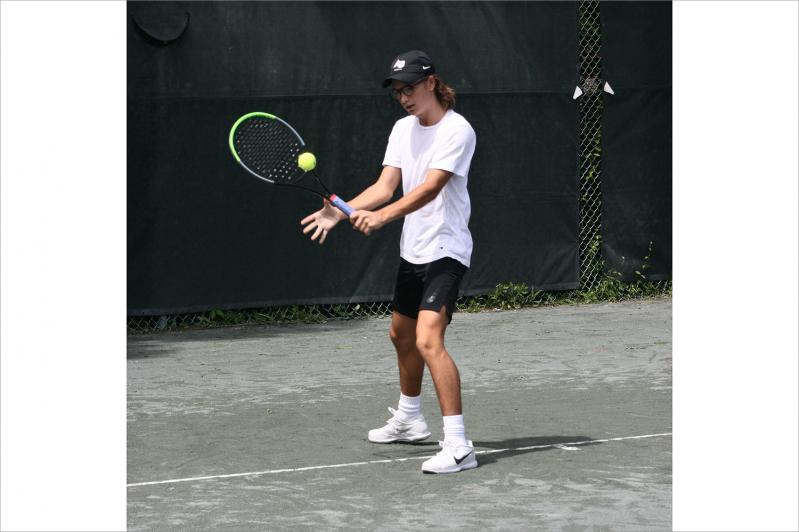 Alex Astilean, who plays first singles for East Hampton High's boys tennis team, will be the second seed, behind Westhampton Beach's Josh Kaplan, in the division individual tournament that is to be played this weekend.
Jack Graves
By Jack Graves

"We're so much better than we were when the season began," Kevin McConville, who coaches East Hampton High School's boys tennis team, said in coming off the courts at Hampton Racquet Monday afternoon.

"We have two matches left," Hampton Racquet's head pro said, "with Southampton, which we beat 7-0 the first time, and Southold-Greenport, which we beat 6-1. If we repeat those wins we'll share the league championship with Westhampton, and we'll probably be seeded sixth and seventh in the county team tournament, which would be good because we wouldn't have to face the top seeds right off the bat."

As of Monday, McConville was trying to arrange the final matches so that his seniors, who were to have taken A.P. tests Tuesday and yesterday, would be available, and so that he would be able to take part in the division individual tournament's seeding session, and thus argue on their behalf.

Max Astilean "should be the number-two seed in the division singles given the fact that he beat Shoreham's number-one, a seventh grader who had beaten Max the first time, in the match we had with them on Friday. . . . I only had nine kids for the Shoreham match. I forfeited at fourth singles, the only match we lost. We won everything else. We beat them 4-3 the first time. It's another example of how much we've improved."

Speaking of seventh graders, McConville, who has his eye on a few here, continues to urge East Hampton's administration to let them play up if their talent warrants it. "Henry Cooper, Nick's younger brother, would have played fourth singles for us this year."

He also wants East Hampton to enter into a reciprocal arrangement with the Ross School, which fielded no varsity team this season, that would enable Ross students to play on East Hampton's tennis teams, as is the case with Pierson students.

Back to the matters at hand, McConville said, "Nick Cooper, who played number-two for me for most of the season, is going to play number-one in our last two matches, which I'm hoping will get him a higher seeding if he beats their number-ones."

Both Astilean, a sophomore, and Nick Cooper, a freshman, "have a good chance to make the county individual tournament. They take each division's final eight into it, and the top four doubles teams in each division go."

Also looking ahead to the division tournament, which is to be played this weekend, probably at Shoreham-Wading River High School, McConville said he would pair up Matt McGovern and Bryan Chen again in the final two league matches. "They both have big serves -- if I can get Bryan to play the net as well as Matt, they'd be really good."

When McConville said the team had become so much better, his interviewer said, "It's because they've listened to you."

"They're real coachable," the coach continued. "They ask good questions, and when I'm about to give them some advice during a match, they'll know what I'm going to say."

"We've been concentrating on two things: effort and shot selection, both of which are under their control. Execution comes and goes, but they know they'll do well if they play hard and play smart."