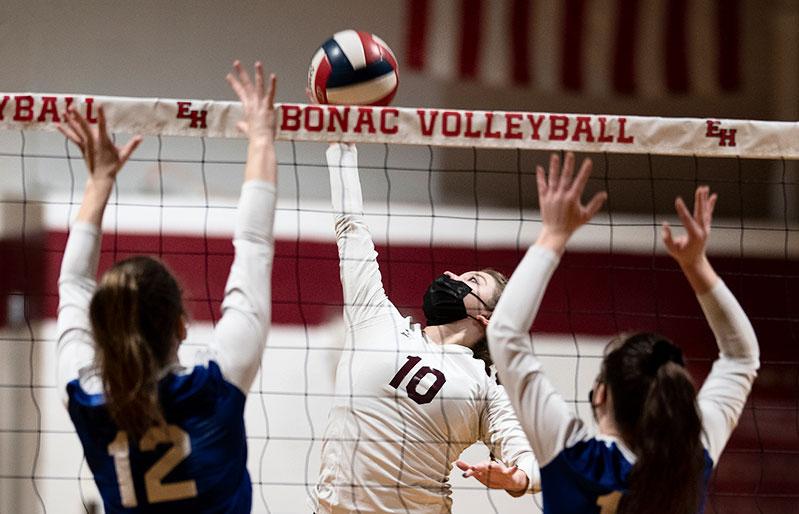 Diane O'Donnell, East Hampton's girls cross-country coach, said Tuesday morning that her team would take a 3-0 record into the season-ending meet here with Amityville that afternoon.

As was the case on March 30, O'Donnell was without the services on Tuesday of Ava Engstrom, one of the team's top runners, owing to quarantining.

With only four runners, O'Donnell was facing a forfeit Tuesday, as she had in the meet with Mount Sinai on March 30. "But Mount Sinai's coach agreed to count the top four, which was very generous of him," she said. Consequently, with Dylan Cashin in third place (bettering her previous-best time on the course by more than a half-minute), Ryleigh O'Donnell in fourth, Emma Hren in fifth, and Bella Tarbet in sixth, East Hampton defeated Mount Sinai 14-23.

Two Pierson runners competed here on the 30th, and one of them, Penelope Greene, won handily. A Mount Sinai girl was the runner-up, and then came Bonac's quartet.

The girls are to run in the division meet at Sunken Meadow State Park in Kings Park next Thursday. Islip and East Hampton will be the teams from League VII, O'Donnell said, though she wasn't sure about the ones from League VIII "because the cross-country results aren't being posted on Section XI's website."

East Hampton, which had trailed by 8 points, and with Hannah Hartsough and Brooke Wittmer successively serving, pulled to within 3, at 19-16, in Saturday's first set before the visitors regained the momentum.

The third set was pretty much nip and tuck the whole way. A kill by Faith Fenelon pulled East Hampton to 22-21. A kill soon after by Hartsough narrowed the margin to one point again, at 23-22, after which a Mount Sinai kill upped the lead to 24-22. A Mount Sinai error brought the Bonackers to within one again, but a long serve by Fenelon brought an end to the match.

"They could have communicated better at times, but, otherwise, the girls played very well," Choi said in an email afterward. "Despite the record, the team is looking much better than it did at the beginning of the season. True, we don't have a lights-out hitter, so, to make up for this, we need to be more strategic in our placements. They're improving a little by little every day. We'll see how it goes."