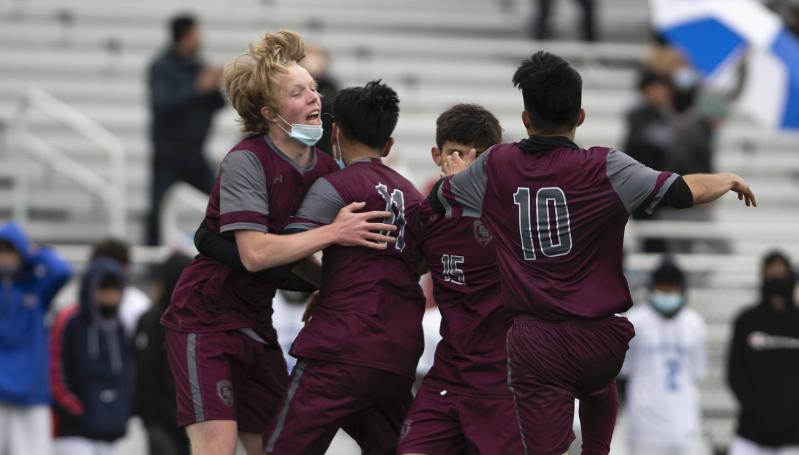 The East Hampton High School boys soccer team, which finished the regular season at 8-1-1 and was fourth-seeded in the Suffolk County Class A tournament, defeated fifth-seeded Hauppauge 1-0 in a quarterfinal-round game here Friday thanks to an own goal in the 57th minute.

Matt McGovern, East Hampton's center forward, was the last Bonac player to touch the ball, which Nico Cifuentes-Diaz, who'd brought it up the right side, had played high into the goal mouth. An Eagle defender, trying to parry McGovern's flick off the back of his head, inadvertently kicked the ball into the goal off the inside of the right post.

"It doesn't matter how it goes into the net," Don McGovern, Matt's father and the team's coach, said to his happy players afterward. "You were dictating play in the second half."

Hauppauge's players, while not as skilled as East Hampton's, were quick to the ball and always a threat, especially on free kicks in East Hampton's end and on corner kicks.

But East Hampton's strong defenders, Christopher Barahona, the goalie, and Robert Rea, Cifuentes-Diaz, Hudson Musnicki, and Robert Velez among them, were up to the task. Rea, in fact, made a save of his own with two minutes left until halftime after Barahona had left the goal untended momentarily.

"It was a great win," the elder McGovern said afterward. "It had been a long wait -- we hadn't played since April 6."

Consequently, East Hampton is to play at top-seeded Half Hollow Hills West in a semifinal-round game on Wednesday. Hills West defeated John Glenn 2-1 in a quarterfinal matchup Friday. East Hampton beat Glenn 2-0 in the regular season.

"I would put us up there against anyone," McGovern said when asked how his team might fare against Hills West.

The first half of Friday's game was scoreless despite the nonstop action, mostly in the middle of the field with neither team getting off any serious shots until Rea was called upon to make the open-goal save with about two minutes left until the break.

During the 10-minute intermission, McGovern told his players to "push it up more -- we need more of a presence in the midfield . . . they're marking man-for-man."

"You have to shoot," Joe Vas, East Hampton's athletic director, added. "We haven't taken a shot. I don't know Spanish, but you should relax."

Tranquilo was the word, everyone agreed.

"Play like you do in practice -- there's no need to be nervous," the A.D. continued. "This is the first step."

When play resumed, it was clear that East Hampton's players had listened. In the opening minutes a hard free kick from 30 yards out by Cifuentes-Diaz clanged down off the field goal bar above the goal's crossbar, and somehow was prevented from going in by Riley Henselder, the Eagles' senior keeper.

With Hauppauge on its heels and kicking wildly at times, the Bonackers continued to attack. Off a throw-in, a shot by David Ayala sailed high, and then, with 10 minutes gone, a ground-hugger by Christopher Pintado skipped wide left. Less than two minutes afterward, a similar shot taken by Alex Vanegas did the same.

Finally, with 23 minutes left to play, the Bonackers, with some help from the Eagles' embattled defenders, got the goal they needed.

The visitors continued to play feverishly, sometimes exceedingly so, as was evidenced by two yellow cards the referees were to hand out.

With 19 minutes left, Eric Armijos, the sophomore right wing, found himself momentarily splayed out on the track thanks to an elbow thrown as he and a defender dashed for the ball down the right sideline. No call came, however, and Armijos, unruffled, picked himself up and rejoined the fray.

With 15 minutes to go, Pintado was taken down from behind by Luke Augeri, arguably Hauppauge's best player, who received a yellow card as a result. Two minutes later, Pintado was presented with a great chance to score, but mistimed the crossing pass that Armijos had sent his way across the goal mouth.

Ayala had another opportunity in the 74th minute, but his header of a long free kick taken by Cifuentes-Diaz sailed just over the crossbar.

Hauppauge was awarded three corner kicks in the second half that were parried and cleared, though probably the most serious threat Barahona faced was a 40-yard head-on free kick by Luke Augeri in the 72nd minute that Barahona, rising up above the crowd, punched out.

"They were a tough team," Vas, who coached championship teams at Mattituck and at Center Moriches, said during the celebratory postgame huddle. "I liked your effort . . . the first playoff game is the hardest to win."