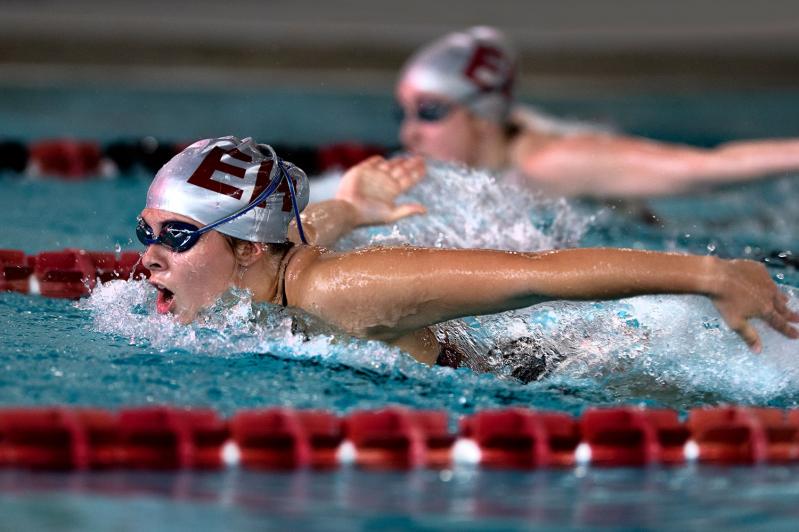 Catalina Badilla, above on the way to winning the 100-yard butterfly Friday against Harborfields, was one of five Bonac seniors honored before the last league meet of the season.
Craig Macnaughton
By Jack Graves

The East Hampton High School girls swimming team defeated Lindenhurst 53-43 on April 6 and Harborfields 91-77 at the Y.M.C.A. East Hampton RECenter Friday to finish the league season as the runner-up, at 4-1, to undefeated Sayville-Bayport.

The league meet is to comprise three dual meets tomorrow -- one of them here with Lindenhurst -- from which the times are to be extrapolated, East Hampton’s coach, Craig Brierley, said in a Tuesday email, “but all is subject to change until confirmed.”

The Bonackers won nine of the 12 events in the meet at Lindenhurst on April 6, beginning with the 200-yard medley relay team of Camy Hatch, Catalina Badilla, Kiara Bailey-Williams, and Summer Jones.

Similarly, East Hampton won eight of the first 11 events in the meet with Harborfields -- a meet in which, Brierley said, “Summer Jones dominated the 200 and 500 free events and Jane Brierley, a fellow sophomore, was dominant in the 50 free and 100 breast.”

The team’s five seniors -- Badilla and Bailey-Williams of Pierson and Caroline Brown, Nicole Gutierrez, and Stephanie Pallchisaca, all of East Hampton -- were honored before the meet began and figured prominently in the races.

Bailey-Williams, said Brierley “went a season-best time in the 200 individual medley, winning a close race for second place. Badilla took first place in the 100 fly with Bailey-Williams the runner-up in a personal-best time and Gutierrez placing fourth. And Stephanie Pallchisaca did her part by competing in all three relays, anchoring one of the 400 teams.”

The swimmer of the meet at Lindenhurst was Ruby Tyrell, a ninth grader “who has been working very hard and has consistently been improving.” The swimmer of the meet on Friday was Ava Castillo, an eighth grader who “placed third in the 200 free in a best time, placed fourth in the 500, and led off the third-place B 400 relay team with another personal-best time.”