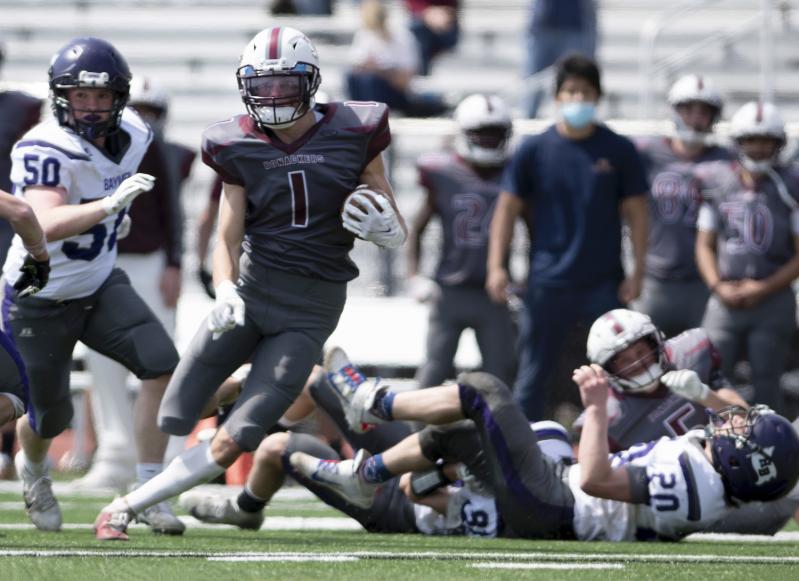 Not only was Saturday's win against Hampton Bays East Hampton's first of the season, but it was the first varsity win here in almost five years.
Craig Macnaughton
By Jack Graves

One couldn't have asked for a better game to go out on.

"It was a wonderful day and we had a wonderful crowd," Joe McKee, East Hampton High's varsity football coach, said after his team had smothered Hampton Bays 30-0.

It was the Bonackers' first win of the season vis-a-vis four losses -- a season in which his charges had improved in every game, McKee said, adding that "the thing I'm most proud of is how physical we were. East Hampton teams have always been known for their hard-hitting, tough-nosed kids."

It was with that thought not far from his mind that before the game McKee had given the game ball to the family of the late Bo Lawler, who had played on the 1969 team. That squad, numbering only 13, had upset Longwood and Riverhead in its last two games.

"After his playing days he would always give the team a pep talk before its annual game with Southampton," said the coach, who as a player in the early 1980s had listened to some of them. "Bob Budd said that team keyed the program's subsequent success," McKee said of the man who had coached the 1969 team with Dick Cooney. Budd was on the sidelines Saturday.

Actually, not only was Saturday's win East Hampton's first of the season, but it was the first varsity win here in almost five years, a period during which McKee has been working energetically to revive East Hampton's football program.

And it seems he has: There were 30 on the varsity this season, 30 on the "really strong" junior varsity, coached by Andrew Daige and Jaron Greenridge, and there are 36 on Rob Rivera and Matt Shimkus's middle school team that was to have made its debut here yesterday with Center Moriches.

A lot of flags flew in the first half of Saturday's varsity game, but the penalties were generally owing to will-to-win zeal, at least in East Hampton's case.

The first quarter was scoreless, but two big stops early in the second quarter, on third-and-two and fourth-and-two situations, with the Baymen's stocky running back carrying the ball both times, set up East Hampton's first score. The three-yard plunge by Kevin Bunce Jr. followed a 19-yard dash down the right sideline by Finn Byrnes, a sophomore running back and outside linebacker in his first year with the team.

A holding call annulled Topher Cullen's subsequent pass to Bryan Pannasch in the end zone, but the two connected on the do-over for an 8-0 lead.

Soon after, Pannasch caught everyone's attention again as he gathered in a 14-yard pass from Cullen at East Hampton's 46, broke a tackle, and ran the rest of the way for East Hampton's second touchdown of the afternoon with four and a half minutes left until the half.

In trying for 2 more points, Bunce was stopped just short of the goal line, so the score remained 14-0, which is what it was at the halftime break. Leading up to it, though, a fumble recovery by Pannasch at the Baymen's 27 and a subsequent interception by Finn at the visitor's 30 kept the Baymen's defense on the field.

The Bonackers came close to scoring again as the second half began. Nick Lombardo fielded the Baymen's onside kick well within the 50, but, following four first downs, Hudson Brindle, who was unmarked (and who was to atone soon after), dropped a second-down 16-yard pass in the end zone.

The ball went over to the Baymen at their 8, but Bonac's defense again held firm, running down the quarterback as he chased after a high snap in the end zone.

Down 16-0, the visitors had to kick off from their 20, and this time the home team took full advantage. As the fourth quarter began, from the 10 Cullen hit a wide-open Drew Salamy in the middle of the end zone on the ninth play of the drive, but a holding call brought the ball back. No matter: On the next play, Cullen lofted a 25-yard pass for Pannasch that the first-year senior hauled down in the right corner of the end zone for a 22-0 lead. Brindle's point-after kick was good for 23-0 with 12 minutes still to play.

A minute and a half later, Brindle intercepted at the Baymen's 38, and, buoyed by his teammates' and Bonac fans' cheers, pranced into the end zone.

There were photos all around afterward, of the team, its coaches, and the program's jayvee and middle school players.

Though it's closed at the moment because of the pandemic, McKee urged everyone to get into the weight room so they can become stronger.

As for stats, McKee said Cullen, aside from his two touchdown passes, ran for 35-plus yards, that Bunce had rushed for 67 yards, including one touchdown, that Byrnes, in addition to his interception, rushed for 48 yards and had two sacks, that Lombardo had a sack "and several other tackles," and that Ryan DeSousa had eight tackles. And everyone, he said, had played.