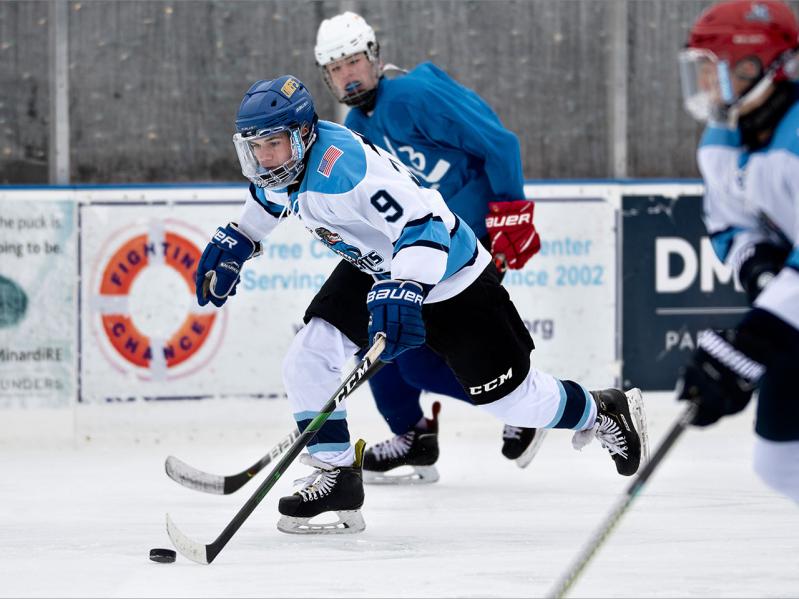 Troy Albert, who, with his wife, Caryn, has for the past five years overseen the Peconic Hockey Foundation, played a lot of pond hockey in his youth in Minnesota, and realized on moving to eastern Long Island not long ago that "there was nothing for kids to do out here in the winter months."

That hockey might go far toward enlivening an East End winter became all the more evident, the Wading River resident said, when, on a Christmas break trip to his brother's lakeside house in Minnesota seven or eight years ago, "our kids skated every day, and that was all they wanted to do when we came back."

In 2016, the couple launched the Peconic Hockey Foundation, one of whose goals is to build a covered rink in the Riverhead area, perhaps at Calverton, that would provide youngsters on the North and South Forks with a place to play.

"We've raised about $1 million so far, and have about $2 million more to go," Albert, the Sebonack Golf Club's chief operating officer, said during a telephone conversation on Monday. The foundation's chief fund-raiser is a golf outing with professional athletes at Sebonack (the 2013 site of the U.S. Women's Open) in October, though donations can be made any time through the peconichockey.org website.

In the meanwhile, the foundation's Tier 3 team of 15-to-16-year-old hockey players, the Peconic Wildcats, has found a home at Doug and Kathryn De Groot's Buckskill Winter Club in East Hampton.

This winter, the Wildcats have been practicing and playing at Buckskill on Thursday evenings and Sunday mornings. A game is to be played there at 7 tonight with Suffolk Select. Another home game is scheduled for Buckskill's season-ending day, on March 14.

One of Buckskill's hockey coaches, Tim Luzadre, put Albert in touch with De Groot, who, during the Katy's Courage Ice Show Saturday night, pointed out that the foundation had donated the $6,000 brightly lit scoreboard at the rink's far end.

De Groot had been "amazing" when it had come to nurturing the growth of hockey on eastern Long Island, said Albert, whose Peconic Wildcats team, which he coaches along with Greg Maurer and Tim Daly, had as of Monday eight games -- several of them here -- yet to play with similar-age teams from across Long Island before the season ends. "Our kids are from all over Long Island, but primarily from the East End," Albert said.

Not having grown up in a family with means, Albert has seen to it that the foundation has made available $60,000 in scholarship aid to youngsters with need in the past few years, and has donated $25,000 worth of floorball equipment to schools across the Island so that kids can familiarize themselves with the game indoors.

"We're still looking for more schools to give these floorball sets to," he said, adding that "we've also started a 'recycle the game' project to get donated equipment to kids in need."

He'd been able to run the travel team "at cost. . . . Our goal when we started this team was not to spend weekends in hotels in Pennsylvania or Massachusetts. There's plenty of talent in the metro area -- in Westchester, New York City, and in Nassau and Suffolk."

Talent wasn't the problem, he said, and neither was desire. "The problem has been getting more ice. That's why we started the foundation, to get ice."