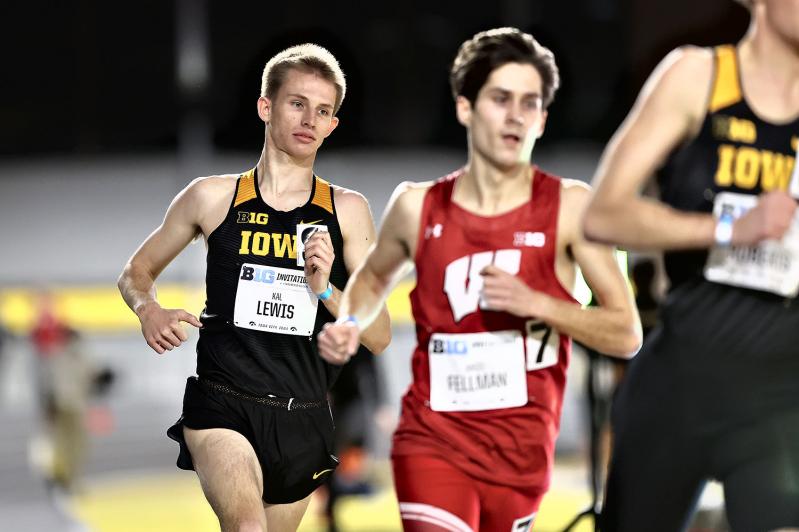 Kal Lewis ran a 4:07.14 mile for the University of Iowa in the Hawkeye BIG Invitational Friday, finishing fourth and bettering his previous best by more than seven seconds.
Darren Miller, University of Iowa Sports Information
By Jack Graves

Having followed his coach's advice, Kal Lewis, the University of Iowa freshman from Shelter Island, trailed a Big Ten pack for most of the indoor mile race at Iowa's field house Friday before kicking his way to fourth place in a lifetime-best 4 minutes and 7.14 seconds, "a second out of second, and a step out of third," according to Cliff Clark, Shelter Island's running guru.

It was the second-fastest mile time ever for an Iowa freshman and 11th-fastest over all in Hawkeye history.

Crediting Toby Green, Lewis's former cross-country and track coach, with preparing him well, Clark said Lewis's 4:07.14 bettered his previous best, run earlier this season, "by more than 7 seconds," and was 10 seconds faster than the fastest mile the Shelter Islander ran when in high school.

Lewis's plan — inasmuch as the other five runners had better times going in than he — was to trail the pack on the 200-meter banked track until the final two laps. Lewis told Clark that he planned to run the first 800 in 2:03 or 2:04. He hit the halfway point at 2:04 as it turned out. He made his move with 300 meters to go, passing two runners, one of them a teammate, on his way to the aforementioned fourth-place finish.

"He executed his game plan perfectly," said Clark. "Kal has taken his game to a whole new level."

Spring Has Sprung at the L.V.I.S. Shops
An Online Auction for ARF
A Rescheduled Telephone Town Hall With Lee Zeldin
END_OF_DOCUMENT_TOKEN_TO_BE_REPLACED