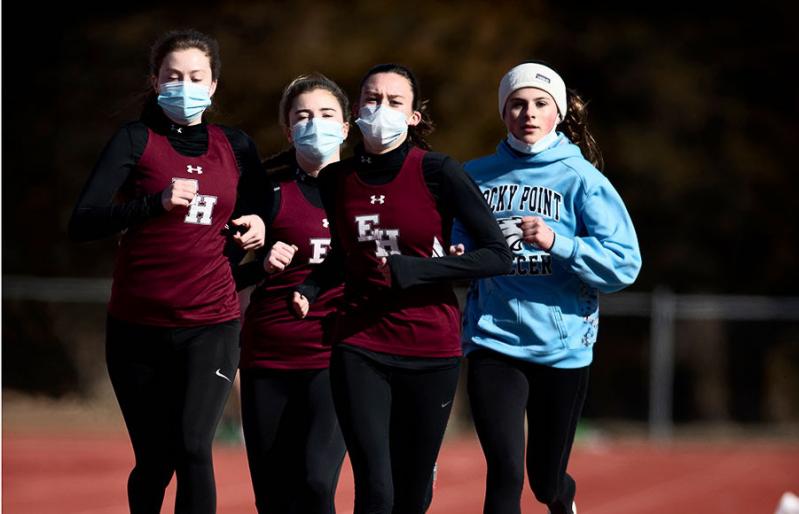 It was pretty much good news all around for East Hampton High's active winter teams this past week: The swimmers, in their final home meet of the foreshortened season, defeated Lindenhurst 71-59, "exhibitioning" in the final two events so as not to run up a score; the boys track team here on Saturday defeated Rocky Point 50-45, and the girls, whose coach, Yani Cuesta, was still awaiting Rocky Point's long jump results as of Sunday, were leading 43-39.

That there was a track meet at all on a day in which most meets were canceled countywide was owing to the good offices of the high school's grounds crew, which removed all the snow from the track, and to the school district's athletic director, Joe Vas, who, employing a tactic he'd learned upstate, placed on the field before the snow fell 20 or so barrels, whose radiated heat, with the sun's help, made the snow vanish.

Adding to the effect was the fact that the field had been resurfaced this summer, Vas said, when this writer wondered if the lines had been recently painted.

There were six teams in action Saturday, boys and girls from East Hampton, Rocky Point, and Shelter Island.

Kevin Barry, who is coaching the Shelter Island girls, said Vas had extended a last-minute invitation to that school's A.D., Todd Gulluscio, after Southold, the school Barry's team was to run against Saturday, and Elwood-John Glenn, where Toby Green's boys were to have contended, canceled.

In case this writer had forgotten, Barry reminded him that Shelter Island High does not have a track. "We run around the grass on Fiske Field and down to the parking lot at Wade's Beach and jump onto the sand," he said when asked about his and Green's practice sessions.

And yet, despite being without a track, Shelter Island has turned out some stellar runners over the years, the latest being Kal Lewis, a freshman at the University of Iowa, who ran the 800 in 1 minute and 54.38 seconds Saturday at the Nebraska Track and Field Quadrangular. Thus far, Lewis has run the 600 in 1:21.19 and the mile in 4:14.85. He is on one of the Hawkeyes' 1,600-meter relay teams as well.

"It was spectacular," Barry said of Saturday's meet here. "The sun was out, the track and field were cleared of snow, and it was 40 degrees. And it was great to see some of the kids I'll be coaching in cross-country as of March 1."

Ben Turnbull, who coaches East Hampton's boys, said later that among the highlights were Luc Campbell's win and Michael Moret's runner-up finish in the 55-meter high hurdles; Amari Gordon's win and Brayan Rivera's second-place finish in the 1,600; Jackson Bakes's win in the 55-meter dash; Matthew McGovern's runner-up finish in the 1,000, in a personal best 3:21; Matt Rosario's second-place finish in the 600, also in a personal best time of 1:50; Campbell's win in the 300, a race in which Bakes placed third, and the 4-by-400 relay team's winning 3:56, "a season best."

As for the field events, Cuesta said, "Rocky Point got the triple jump and the shot-put in, but felt they didn't have enough time to do the long jump. We haven't been doing the high jump because a large tire that had been placed on top of the pads created a huge divot, ruining them."

"Our boys were especially motivated that day, and went right to work, with the medley relay team [Aidan McCormac, Owen McCormac, Harrison, and Cashes Muse] besting Lindenhurst's A team by 20 seconds, which seemed to set the tone for the rest of the meet."