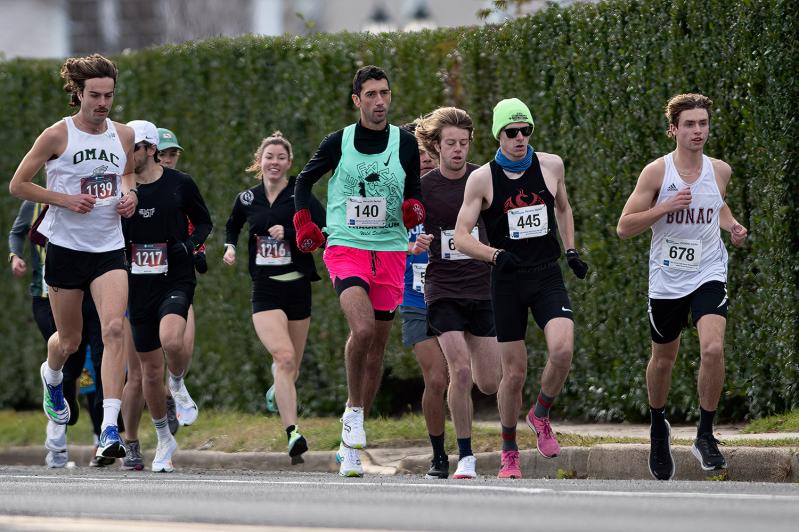 Among the Turkey Trot front-runners pictured above are Ryan Fowkes, who was to win the 6-miler, at left, and Erik Engstrom, the 3-miler’s winner, who was behind the former winner, Nicholas Berglin (445), when the photo was taken.
Craig Macnaughton
By Jack Graves

One thing for sure, the 847 participants in the East Hampton Town Recreation Department’s 3 and 6-mile races around Montauk’s Fort Pond last Thursday constituted a record.

That was the good news.

As for place finishes, owing apparently to a glitch in aligning online registrations with bib numbers, who knows?

Bob Beattie, the races’ timer, was said to be sifting through the jumbled list earlier this week, with a goal of posting a correct one “by the end of the week.”

Online, rather than day-of-race, registration had been required this year, “because of Covid,” John Rooney, the town’s recreation director, said. The cutoff was 7 a.m. on Thanksgiving Day, but Rooney said that deadline will have to be moved up in the future, given that 127 registered online the day before, and that 45 had similarly signed up after midnight.

Consequently, despite the best laid plans, the races, true to form, began late, though they were so greatly delayed this year — by 40 or so minutes — that a number of participants who’d become tired of waiting were told they could set off early on a fun run. Apparently, it was expected that they’d tail off at the finish, but so many crossed the line before the official racers did that an official finish list was impossible to come up with.

Erik Engstrom, East Hampton High’s former county cross-country champion, who later ran at the University of Massachusetts, from which he graduated in June of 2020, won the 3-miler, in 15:47, he said. And Ryan Fowkes, who has his sights set on breaking 4 minutes in the mile at George Washington University, where he is a sophomore, won the 6, in 32:02.

Neither time, though creditable, was a record, their former coach, Kevin Barry, agreed during a telephone conversation Monday.

In winning the 6, Fowkes, for the first time, topped the perennial 6-mile champion, Tim Rossi, a member of the Brooklyn Track Club who beat him here two years ago (there was no live race in 2020) by almost a minute and a half. Rossi was the 6’s runner-up, and, presumably, his girlfriend, Erin Gregoire, with whom he ran, was the 6-miler’s female winner.

The identity of the 3-miler’s female winner was unknown as of Monday morning. Ava Engstrom, who ran cross-country this fall at the University of Vermont, Ryleigh O’Donnell, East Hampton High’s number-two runner, and Bella Tarbet, who is swimming at Washington and Lee University now, immediately crossed this writer’s mind, though a definitive answer was not vouchsafed as of press time.

“It’s the first time I haven’t been able to see the start,” said Rooney, who was busy up until the last minute sifting through various lists that Beattie provided and assigning bib numbers in the basement of the Montauk Chamber of Commerce building across the street from the Circle.

“We expected 400 and wound up with over 800, so, the glitch aside, it’s a good problem to have,” Rooney said. A postrace meeting would be held, he added, so that things will run smoothly next year.