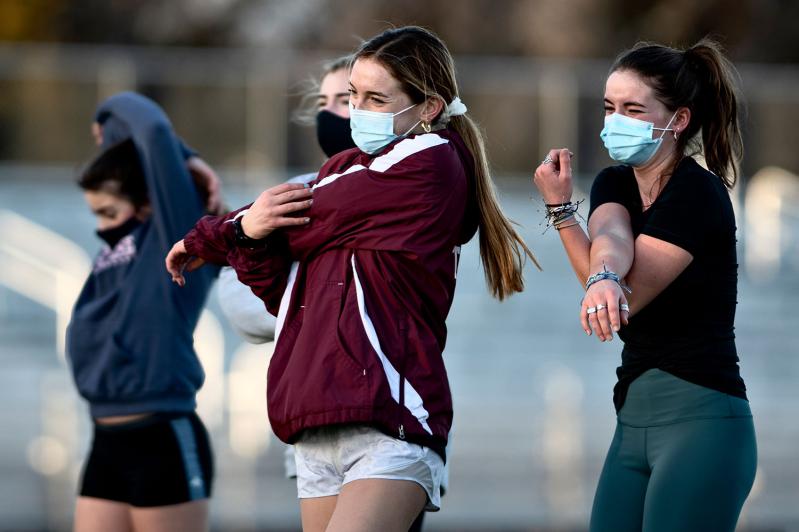 The high school and the middle school have been closed this week, replaced by remote learning, with perhaps another closure to come, and the high school's turf field and track have been empty given that neither the boys nor the girls track teams have been allowed to practice there.

This means — again, perhaps — that East Hampton's already-foreshortened winter sports season may not begin until Tuesday, with Craig Brierley's swimmers at Deer Park and with Mike Vitulli's bowlers versus Rocky Point at the All Star lanes in Riverhead.

Of the coaches only Yani Cuesta, of girls track, said her charges were in the shape she might have expected at this time absent the virus.

"We're trying to make the best of it," Cuesta said during a telephone conversation Sunday. "We're working out virtually this week — I've been creating plans for them that they're following. The girls have progressed a lot — they're in pretty good shape, considering. We've got the requisite six practices in, and while it's not a huge group, they're hard-working and they've kept up their times."

Initially, field events in the winter were to have been held the day before the weekend meets, "but for the moment we're going to have everything on the same day, with the field events first with the track events to follow," Cuesta said, agreeing that her team — see Engstrom, Greene, Tarbet, and Cashin — would be strong in the distances.

It had been the school board's decision to ban outdoor practices at the track, said Mike Buquicchio, who assists Ben Turnbull with the boys team, which numbers 20, about 10 fewer than he'd originally expected, especially given the postponement of the basketball and wrestling seasons. "But it's hard for a lot of kids to get to practices. Montauk provides a bus, but there are none for the kids who live in Springs and East Hampton."

The closure, he added, "could be more than a week. It's all up in the air."

"We've spent the whole of last week on conditioning and the kids are pretty sore. A couple of them, who tightened up in the first few days, were sent to the trainer. We've been doing a lot of work on the turf — I don't want them to get shin splints — and we've been doing some bleacher-running, which is more forgiving. . . . But we've been impressed by their adherence to the safety protocols, the mask wearing and social distancing. That's to the credit of our school board."

Boys track's roster includes Evan Masi and Amari Gordon, junior long-distance runners, Luc Campbell, a senior sprinter/hurdler, and Jackson Bakes, a junior sprinter from Pierson. Turnbull and Buquicchio are hoping to get Ben McErlean of Pierson, a recent signee with Manhattan College, to come out.

The track teams were scheduled to make their competitive debuts this coming Sunday, with the girls at home against Sayville and the boys at Sayville, but it was likely, the coaches said, that those meets would either be rescheduled or scratched.

Boys swimming, apparently a strong squad again, which was to have debuted today, is in the same boat.

"We've been practicing every day except Sunday, but are we where we would be in a normal year? No, because our practice times have been cut by more than half," Brierley said. "We're in the pool for 45 minutes, instead of an hour and a half, which used to be the case, and we've cut out our dry land training, which used to last a half-hour, because there's no place to do it. But the kids are happy to be doing something social and something that's fun."

The coach said his roster numbers about 17 — as opposed to the 25 to 30 that he's used to — a group that includes two McCormacs, Owen, a senior, and Aiden, a sophomore. (A third, Emmit, an eighth grader, was not allowed to move up because of school district rules.) Another McCormac, Ethan, a Marist recruit, had led the team in the past few years.

Besides Owen McCormac, Brierley's seniors include Jack Duryea, Colin Harrison, and Joey Badilla, all of Pierson, and Fernando Menjura -- "a strong core."

"We've also got a strong contingent of young swimmers, mostly sophomores," said Brierley, who added, in reply to a question, that none of them, as might be expected, were members of the Y's youth swim team, the Hurricanes. That word of the varsity's success had obviously spread, which was "a good thing for the program . . . it's exciting."

Rescheduling today's meet, with North Babylon, might be tough, Brierley said, given the short season. "As it is, we've got two a week."

Brierley's eldest son, Thomas, 24, who was on Marymount's high-powered triathlon team, has replaced Brian Cunningham as his assistant. "Brian couldn't do it — he teaches at John Marshall; his wife, I think, is an administrator at Bridgehampton, and he has to be home with their daughter."

As of Sunday, it looked as if a meet on Tuesday with North Babylon at Deer Park would be the team's first one.