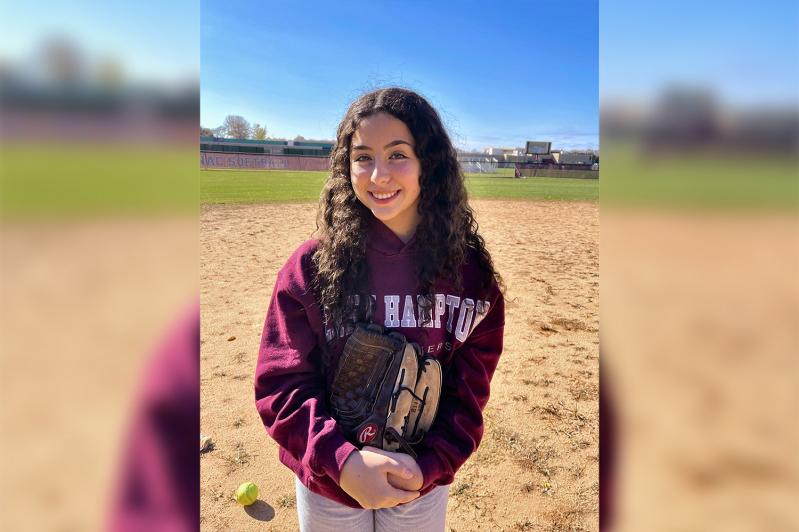 Sienna Salamy, a freshman at East Hampton High School, is heading up an organization called Play It Forward.
Patricia Salamy
By Christine Sampson

Sienna Salamy has two older siblings who have often passed on their much-loved but perfectly usable sports gear to her, but her latest hand-me-down is particularly meaningful.

Salamy, a freshman at East Hampton High School, has inherited a nonprofit organization called Play It Forward, which her older sister, Sydney, started when she was a three-sport athlete at East Hampton, and which her brother, Drew, who now plays baseball at Oberlin College, later took on after Sydney graduated.

With the goal of getting equipment still in good condition into the hands of children whose families can’t afford to buy new gear, here’s how Play It Forward works: Student-athletes and their families can look through whatever stockpiles of equipment they may have in their closets, basements, and garages, and pick out what they no longer need — too-small cleats, balls used for a single season, baseball bats or gloves that someone has grown out of — and take them to the big red bin in the main office at the high school. Then, Salamy and her family sort the donations and box them up to give to schools or teams that are in need.

“I feel like it’s cool because I’m able to give back, follow in my siblings’ footsteps, and help other kids,” said Salamy, primarily a softball player who can be found either at shortstop or first base, and who also takes hip-hop classes at DanceHampton.

While she has never found herself unable to get new equipment when it was needed, she knows how meaningful the right secondhand item can be: Her favorite glove is one that her father and brother played with in the past. It’s broken in, in all the right places, but still in great condition.

“It’s the perfect size, and I’ve used it in every single one of my games,” Salamy said. “I went upstate for softball all-stars and used it there. We were in the championship, and I caught two fly balls with that glove, so it’s meaningful to me.”

She hopes that economically disadvantaged kids experience something similar. “Knowing that whatever they have, knowing that this came from someone who probably had a lot of memories with it, it’s very sentimental, very special,” she said.

Word of Play It Forward has reached beyond East Hampton. In 2018, Patricia Salamy, Sienna’s mother, got a call from someone in Riverhead who had a box of 50 numbered baseball jerseys that were no longer needed. “It was enough for an entire team,” she recalled. “I don’t even know how that person happened to find us. We do have a website, but it was a nice surprise.”

Their website is playitforward-ehhs.org, where a list of acceptable donations can be found (for safety reasons, items such as helmets, skiing or snowboarding equipment, and bowling balls are not accepted). Monetary donations are also accepted, and are tax deductible.

Patricia Salamy said she is extremely proud of her kids. For Sienna in particular, she said, “it’s a growing experience to have to take charge of something.”

Sienna Salamy said she plans to carry Play It Forward through her senior year. She hopes to get other students involved, too, especially to find someone to whom she can pass the baton after she graduates.

“I want people to know that this is helping other people in the community who can’t afford this stuff, and paying it forward to the community,” she said. “If they have anything they can’t afford, we most definitely have it in our bin.

Celebrate Hanukkah All Across Town and at Home
Stuffed With Turkey? Walk It Off
Blood Drive Tuesday in Bridgehampton
END_OF_DOCUMENT_TOKEN_TO_BE_REPLACED