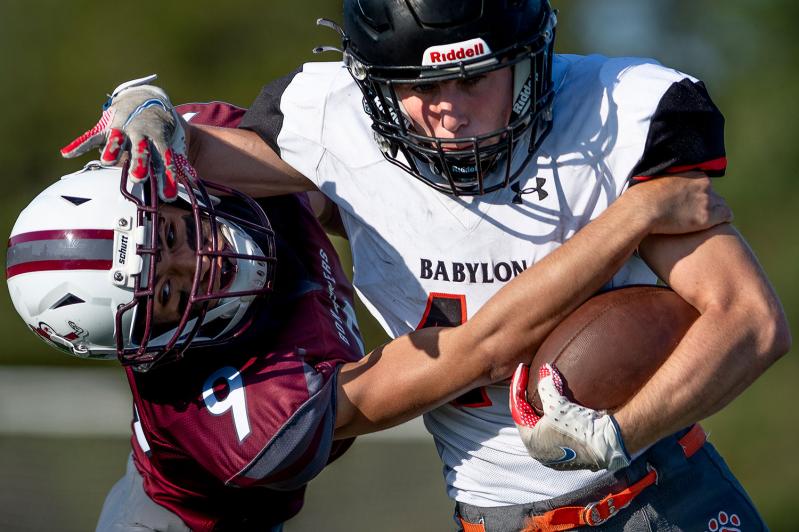 Santi Maya (9) and his Bonac football teammates were largely shunted aside by Babylon here on Saturday.
Craig Macnaughton
By Jack Graves

Going into Saturday’s high school football game here Babylon was ranked 10th and East Hampton eighth in the power-rated Division IV, but the odds were, nevertheless, in the Panthers’ favor, its program having been one of the county’s consistently strong ones over the years.

It wasn’t that the visitors were behemoths — there seemed to be no appreciative difference size-wise — but when it came to grit, to intransigence, the Bonackers were outmatched, at least on that day, and the final score, 41-7, reflected it. The rout improved Babylon’s Division IV record to 2-2 and dropped East Hampton’s to 2-2.

Because he barely had time to breathe, Charlie Corwin, East Hampton’s talented sophomore quarterback, was under pressure all afternoon. His passes either sailed long or were dropped, and, when he kept the ball, onrushing tacklers soon wrapped him up.

It was the same with Bonac’s other chief ball carriers, Finn Byrnes and Michael Moret.

Meanwhile, Joe Young, Corwin’s opposite number, put up big offensive numbers, rushing for 131 yards and two touchdowns on 16 carries, and completing eight of nine passes for 195 yards and three touchdowns — a performance that earned him a “Gridiron Great” mention in Sunday’s Newsday. The sixth TD was scored by Young’s backup from East Hampton’s 14-yard line with a little more than a minute left.

East Hampton went three-and-out the first time it had the ball, and the visitors replied swiftly with a 77-yard, 10-play scoring drive capped by a 25-yard touchdown pass from Young to Jack Pinna. An extra-point run upped the lead to 8-0.

Before the first quarter was over, the Panthers, taking over at their 45, scored again, in two plays, the first a 43-yard catch-and-run, the second a 12-yard touchdown run by Young that he followed with a 2-point pass for a 16-0 lead.

Throughout the game, Joe McKee, East Hampton’s head coach, and his assistants, Kelly McKee, Lorenzo Rodriguez, and Jaron Greenidge, kept urging on Bonac’s defenders from the sidelines, but the Panthers by and large kept rolling.

A few minutes into the second quarter an interception at East Hampton’s 14 revived the home team’s and its fans’ spirits, but, following three short rushes, two by Byrnes and one by Corwin, Will Darrell — whose punts that day were notable — had to kick it away.

A few minutes later, Corwin sacked Young for a 15-yard loss, and with a second-and-30 at Bonac’s 40, Byrnes and Augusto Gomes broke through to sack Young again, for a 2-yard loss this time, prompting a Babylon timeout.

When play resumed, Young threw incomplete for Elijah Kneeland, a tall wide receiver, at the 10, before punting 20 yards to East Hampton’s 23.

Corwin, with no one blocking for him, then was decked at the 22, after which, with hands in his face each time, he threw incomplete twice before Darrell’s punt was blocked, treating the Panthers to a first-and-goal at East Hampton’s 9. Young ran unmolested into the end zone on the next play.

And so it went, as East Hampton’s 40-member band — which was very good, by the way — played on.

The third quarter was even, with Babylon scoring by way of a 23-yard pass from Young to Kneeland, who outjumped Danny Lester, and with Corwin spinning counterclockwise into the right corner of the visitors’ end zone on second-and-9 from the 11. The touchdown capped an 82-yard East Hampton drive that included an unsportsmanlike call that tacked on 15 yards.

Things won’t get any easier, at least not this week. Bayport-Blue Point, which beat Babylon 41-6, is to play here tomorrow at 3:30 p.m.