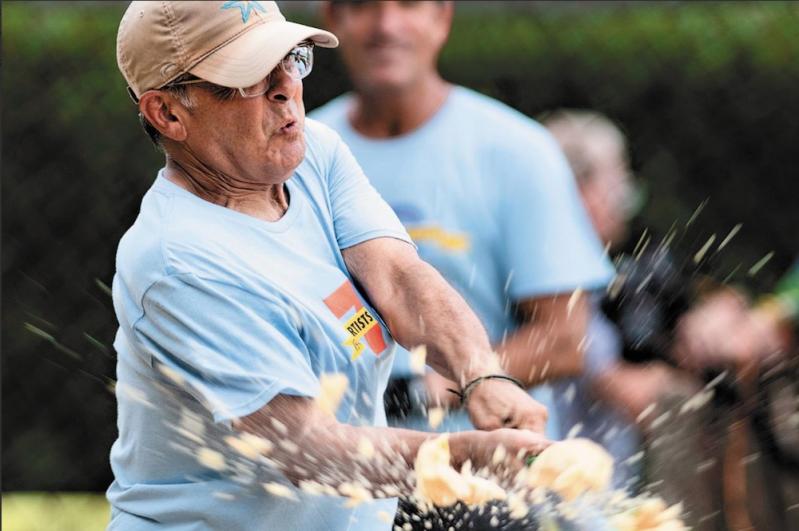 Mike Lupica was the recipient of the turnip at the 2018 game, played in good form and in good jest.
Craig Macnaughton
By Jack Graves

Benito Vila, who was tapped last year to serve as the Artists and Writers Softball Game's impresario, said Sunday that there are plans to play the Game at East Hampton's Herrick Park on Aug. 15, but it's by no means a sure thing.

"If I were a forecaster, I'd say that given the uncertainties, there's an 80-percent chance we won't play, but the board is still planning on it," said Vila, who replaced the 92-year-old Leif Hope, who had overseen the Game for many years.

"We surveyed our players around Memorial Day, and got a lot of positive responses, enough to field 15 per side easy."

If played, the Game, as it has come to be known — or the Annual Agon — is to be contested on the baseball diamond across from the softball field where it is usually played, "because of the need for social distancing," said Vila, who added that "the way we envision it, it will be more like the artist-writers games of the '50s, with a picnic-like atmosphere. We'll throw down the bases, which are coming from my garage. . . . We'd like to keep the tradition going; last year's game" — won by the Artists, 10-8 — "was a lot of fun."

The board, he added, has a permit from East Hampton Village, though it is not shelling out any money this year for such things as hats, T-shirts, or water.

At the board's meeting, which is to take placeThursday night, "we will discuss starting a GoFundMe effort to raise money for our four charities," the Eleanor Whitmore Early Childhood Center, the Retreat, East End Hospice, and Phoenix House. "The idea is to pit the Artists against the Writers when it comes to fund-raising. Whichever team raises the most money for these charities will be the home team."

The charities' needs have been even further heightened given the coronavirus pandemic, Vila said. "With zero expenses, 100 percent of what's raised will go to the four charities."