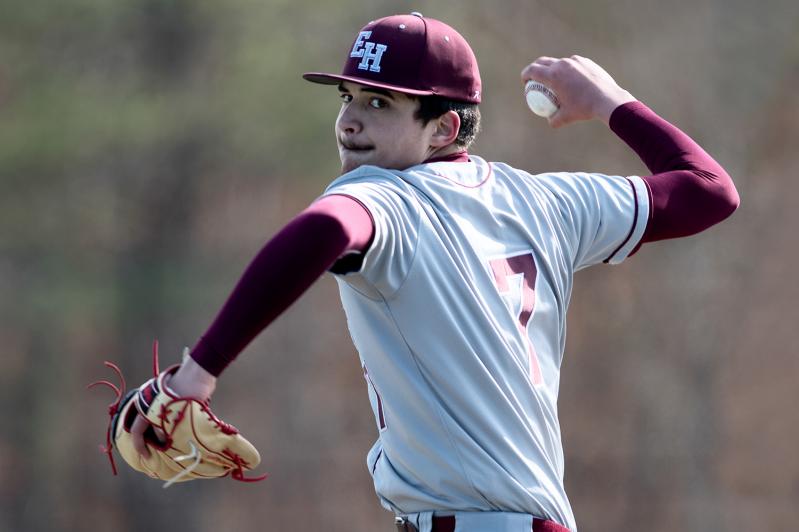 Elian Abreu, seen above in 2019, is one of four East Hampton seniors who will be playing in a high school baseball tournament in Brookhaven in July.
Craig Macnaughton
By Jack Graves

Vinny Alversa, East Hampton High's baseball coach, received an email at around 11:30 p.m. on June 4, asking if he would be interested in entering his team in a large high school tournament that is apparently to be contested on fields in Brookhaven between July 8 and July 12.

Presuming his players, whom he didn't have time to contact, would be up for it — a presumption that turned out to be correct — he "immediately answered yes."

As luck would have it, however, he won't have his starting rotation available to him. There were, he said, four players who had earlier in the year signed up for a Diamond Nation showcase for college coaches that's to be held in Georgia the week during which the tourney is being played here.

Nevertheless, Alversa said, "it will be a good time. We're bringing some younger kids up, and this will give us a chance to give them a good look."

Four of his five seniors — Elian Abreu, Austin Brown, Tom Desmond, who recently won the Paul Yuska award given to the high school senior class's top athlete, and Miguel Mizquirhi — are to play in the tournament. Most of the games, Bonac's coach said, will be played on Brookhaven Town fields in Eastport and Center Moriches, the field in Eastport, a hamlet that straddles Brookhaven and Southampton Towns, being "about 45 minutes away, if you're not in the trade parade."

Asked how he thought his team would have done this season had there been a season, Alversa said, "I think we would have done great - that's what hurts. Everybody was ready to go. We had an amazing pitching staff. It would have been a playoff year. . . . We haven't been to the playoffs in a very long time."

Alversa said he presumed the tournament would be double-elimination. "We're guaranteed at least four games. . . . There should be 30 or so teams there, from every classification. The kids are looking forward to it."

When, in mid-May last year, East Hampton found itself contending for the playoffs in the regular season's last week, Alversa said he could hardly remember the last time the Bonackers were within reaching distance of postseason competition.

"Maybe 12 years ago — I don't know, something like that," he said, when asked if he could recall the last time an East Hampton baseball team had made the playoffs.

Pierson (Sag Harbor) High School's team, which made it to the state Class C semifinal game last year and had hopes of going all the way this season, is said to be eager to play in the tournament too.