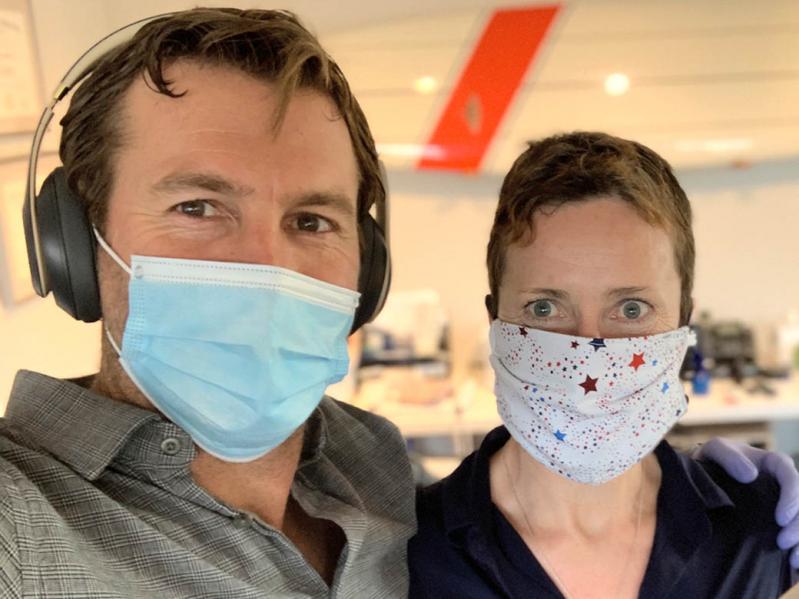 George Wilson and Sinead Fitzgibbon at 27East Physical Therapy in Sag Harbor, where they have continued to see clients, now with precautions against the virus.
By Jack Graves

Sinead Fitzgibbon, the physical therapist, rower, mountain-biker, swimmer, runner, and wit, wasn’t able to answer questions as to what she was doing during the initial coronavirus shutdown because she was too busy treating postoperative and injured patients at 27East Physical Therapy in Sag Harbor’s GeekHampton building on Bay Street.

As she and her business partner, George Wilson, expected, the number of clients they had been seeing fell off 30 to 40 percent at first, though a good number — more than foreseen — had continued to come in, Fitzgibbon said during a recent telephone conversation.

“Most of our clientele is older and somewhat frail, and some of them have chosen not to come in,” but then one day “an 80-plus-year-old lady did. She said her balance training was more important to her than coronavirus worries . . . that if she fell and broke her leg things could be even worse.”

“We still see people who have had surgeries — I’m seeing a person who had an ankle replacement this afternoon, and a person who has had A.C.L. reconstruction. . . . We’re a medically necessary practice — that’s why we’re still open. It’s recession-proof — whether the stock market goes up or down.”

All the precautions were being taken, she said. Rubber gloves and surgical masks were used, and everything was cleaner than it had ever been. “You can eat off the floor now, and the floor is new!”

Government-supported telehealth communications, enabling long-distance patient-clinician contact, were also coming more into play during this worrisome time, Fitzgibbon said. She conducted her first telehealth consultation in March, via Skype, with a client in her 60s whose personal medical history she knew. She had called from Miami after injuring her leg there.

“We had a video conference during which I was able to examine her — no, there was no fracture, it was a muscle tear — and give her tests and exercises. . . . Medicare has relaxed its guidelines when it comes to telemedicine. Nurses, social workers, psychologists, and physical therapists can get reimbursed for these services.”

Three-times-a-week postoperative care lasting three to six weeks was not the norm at 27East, Fitzgibbon said, the idea being to get people up and going in shorter order, after which they could work out in the adjacent gym “as long as they want, and ask us questions while they’re doing so.”

So, did she herself, a highly competitive athlete in a number of endurance sports, have any time to work out?

She laughed. “Yeah, I’ve had to shrink my workout schedule. Before work, I begin with a socially distanced dog walk, followed by a row on my Concept 2 rowing machine, followed by kettlebells.”

Soon, she said, she would be out on the water — her rowing shell was on the top of her truck.

In October, she represented the United States in the World Rowing Coastal Championships in Hong Kong, placing 13th among 60 competitors in the open women’s singles division, and 15th among a similar number in the mixed-doubles division, partnering “with Oliver, of San Francisco, whom I met there.”

She was hoping, she said, to compete again in the world championships this October, in Oeiras, Portugal, near Lisbon.

As for what people should be doing to combat cabin fever, she said, “Anything that keeps their body active and their brain calm. . . . When I was a little kid, swimming at the national games, I learned my first Latin words, ‘Mens Sana in Corpore Sano.’ That was the motto of the Games. ‘A healthy mind in a healthy body.’ To some, exercising in times like these might seem frivolous, but I disagree strongly. It’s even more important now to keep your body strong so that your mind can be strong too.”

It was important as well for athletes to continue to interact, she said, and thanks to electronic communications, they could during this  homebound period in which just about every event she’d signed up for had been canceled, by taking part, for example, in Concept 2’s internationally recognized rowing competitions.

Three women — Sue De Lara, Holly Li, and Ursula Macnamara — she’d been training lately had forgone the Los Angeles Marathon in early March because of coronavirus concerns. They might instead, she said, run a 40K at East Hampton High School’s track further along in the spring, “as a fund-raiser, perhaps, for Southampton Hospital or something.” She could pace them for several miles. “We’re just talking about it at the moment,” Fitzgibbon said.

Asked if she was still mountain-biking, she said brightly that she’d bought a new bike last winter, one with lights on it. “We ride at night,” she said. “It’s a whole different world.”

A story for another day.

When her interviewer added what his eldest daughter, Emily, had said as he was wondering during a recent telephone conversation what he’d be able to write about during this period of enforced idleness, to wit, that, when it came to local sportswriting, history was on his side, Fitzgibbon said, with a laugh, “And you have a captive audience!”

Spring Has Sprung at the L.V.I.S. Shops
An Online Auction for ARF
A Rescheduled Telephone Town Hall With Lee Zeldin
END_OF_DOCUMENT_TOKEN_TO_BE_REPLACED