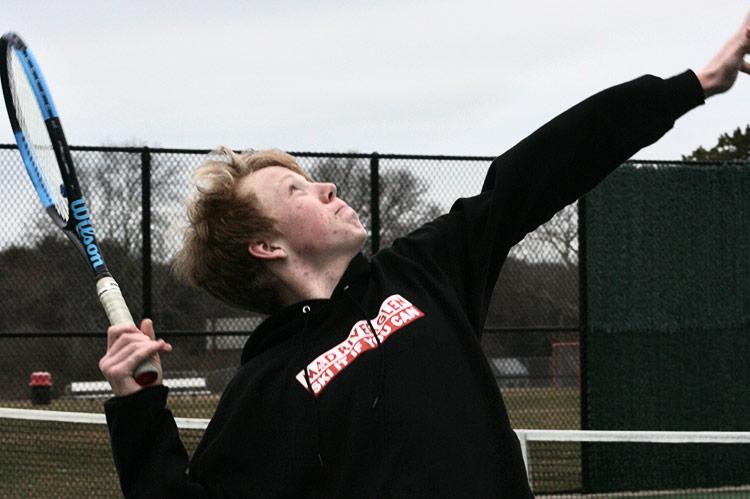 Matt McGovern, who was practicing his serve last Thursday, is to play number-one doubles for Kevin McConville’s boys tennis team, along with Miles Clark.
Jack Graves
By Jack Graves

Last Thursday was the fourth day of practice for East Hampton High’s spring sports teams, and the coaches were wary, given the coronavirus scare.

“I’m praying they don’t shut everything down,” said the varsity baseball coach, Vinny Alversa, whose 2020 edition promises to be his best yet.

Jessica Sanna, the varsity girls lacrosse coach, was missing 10 Pierson students, and Ben Turnbull, the varsity boys track coach, was missing 15 — owing to the fact that the Sag Harbor school’s administration had the day before forbidden its student-athletes to practice or play with the East Hampton teams, with which that school is combined, until March 23.

Given the requisite 10 practices before competing, “that means our Pierson kids may miss half the season,” said Mike Buquicchio, Turnbull’s assistant.

Trying to put the best face on it, Kevin McConville, the varsity boys tennis coach, from whose practice that day Chris Pilarski, a talented Pierson eighth grader, was missing, said a competition hiatus would give him more time to prepare. (The next day, East Hampton’s administration banned practices, as well, through April 3.) Pilarski, he said, would probably play second or third singles for him.

Yani Cuesta, the varsity girls track coach, who had 55 on her roster as of that day, said three of her charges were from Pierson. One of them, Penelope Greene, is an excellent distance runner, as is Ben McErlean, a fellow Whaler who runs on East Hampton’s boys team.

Turnbull was reluctant to single anyone out just yet, but said he had some good distance guys and some potential sprinters. His throwers would be decent, he added, and, as for the jumpers, he didn’t know yet.

Sanna was missing, among others, Pierson’s Grace Perello, a junior midfielder who “takes the draws and was the team’s leading scorer last year.”

Asha Hokanson, an East Hampton junior, and Lola Garneau, an eighth grader who has come up from the East Hampton Middle School, were midfielders as well, the coach said. Asked about defense, she smiled. “All of them want to shoot — no one wants to play defense.”

Her sophomore goalie, Laura Calderon, who played last year, had been improving — “she has good stats, she’s not afraid. . . . I’m hoping we can make her job easier by building a good defense.”

The team was very young, she added, but the program was on the upswing, especially given the fact that Montauk and Springs were now combined in the sport. In addition, Cara Nelson and Anthony Roza were doing a great job with the middle school’s team, she said.

Asked to name some of his pitchers, Alversa rattled off eight — Jackson Baris, Elian Abreu, both seniors, Colin Ruddy, a sophomore, Charlie Condon, a junior, Jack Dickinson, a ninth grader, Drew Salamy, a junior, Tucker Genovesi, a junior, and Tucker Coleman, a junior.

“We’re no longer the league’s doormat,” said Alversa, who, with Henry Meyer, Andrew Rodriguez, and Rob Rivera, has been working pretty much the year round to make East Hampton a team to be reckoned with again. The players themselves had put in so much work, he added appreciatively. Thus he was praying that, eventually, the season would be played out.

The other shoe dropped Friday as Joe Vas, East Hampton’s athletic director, announced that Section XI, the governing body for public high school sports in Suffolk, had postponed all games and contests through April 3, and that East Hampton, as had been the case with 15 other schools, “with more undoubtedly to come,” had said no to practicing during that three-week period as well. As April approaches, “we’ll do a re-evaluation,” the A.D. said.