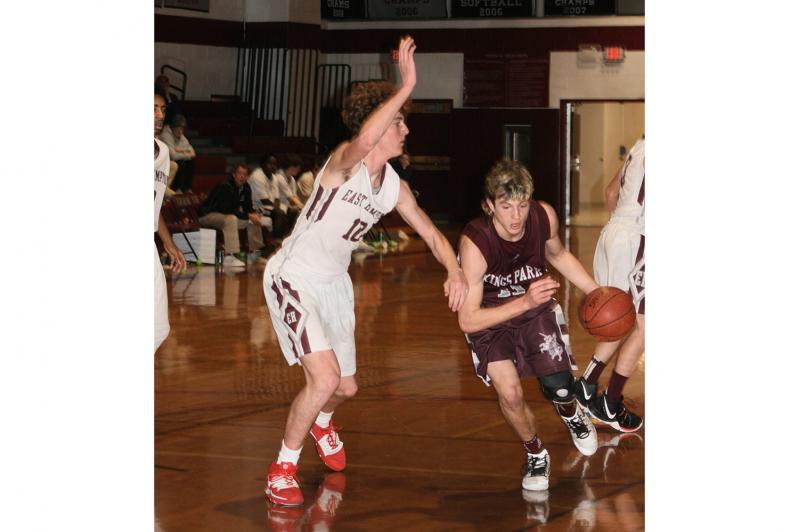 Charlie Condon, at left, one of two “bigs” on East Hampton’s team — the other being Travis Wallace — has improved noticeably since the season began.
Jack Graves
By Jack Graves

The boys basketball season began here with three straight nonleague wins, all at home, then things got worse — the last home win was over Rocky Point on Dec. 16 — before they got better.

Not that everything’s hunky-dory at the moment, though the Bonackers, 3-10 going into this, the season’s last week, had sandwiched two wins on the road between two losses at home, thus lifting the coach Dan White’s spirits to some extent.

When the season began, White said during a conversation over the weekend, he envisioned a three-guard offense with seniors shouldering the burden primarily, along with his tenacious freshman, Luke Reese, but as things went along he “made a 180 and began starting four underclassmen with Jeremy [Vizcaino, the sole senior starter at the moment].”

Aside from Vizcaino and Reese, the starting five in the past four contests — when White decided to change things up — has comprised two “bigs,” Charlie Condon and Travis Wallace, and Topher Cullen, the football team’s quarterback, who can hit from the outside. All are juniors.

Don Reese, Luke’s father, said during halftime Friday that the last time he could remember East Hampton winning back-to-back on the road was “when Jack [now a sophomore guard and finance major at Baruch] was here.”

During the four aforementioned games, “Luke had a couple of 20-point nights,” said White, who spent some time after Friday’s loss with his freshman guard. “He hates to lose,” said White, by way of explanation.

White didn’t argue when this writer said he thought he hated to lose too.

The coach said he was happy with the way his new lineup has been playing of late. The 1-point loss here to West Babylon on the 24th had indeed been disappointing. “We were down by 1 with 20 seconds left. Charlie had a good look, but missed. We rebounded and called timeout. There were three seconds left when we came back for the inbounds play. Charlie shot from about 10 feet away, and missed again. Jeremy got the offensive rebound, but that was it. West Babylon’s a playoff team — we were down 30-23 at the half and came back. . . .”

At Eastport-South Manor, East Hampton finished with ten 3-pointers, five of them by Cullen.

Concerning Friday’s game, “I shouldn’t have started two bigs against a team like Kings Park, but I thought it would be good to give Charlie and Travis playing time.”

The visitors, whose coach had a dozen athletic players at his command, led 13-8 after the first quarter, and jumped out to a 19-8 lead in the second thanks to four Bonac turnovers — two by Reese and one each by Wallace and Vizcaino.

Following a timeout, East Hampton pulled to within 4 as the result of a 3-pointer by Cullen and successive 2s by Condon.

The Kingsmen went into the break up 23-17, and used a relentless full-court press in the third to put the game away.

East Hampton was to have played at 6-7 Harborfields Monday, and was to have ended the season here yesterday with 9-5 Hauppauge.

In Sag Harbor, the basketball news has been cheerier: The Whaler boys were 9-0 in league play as of earlier this week, the girls were 10-4, and each of those teams was readying itself for postseason play.