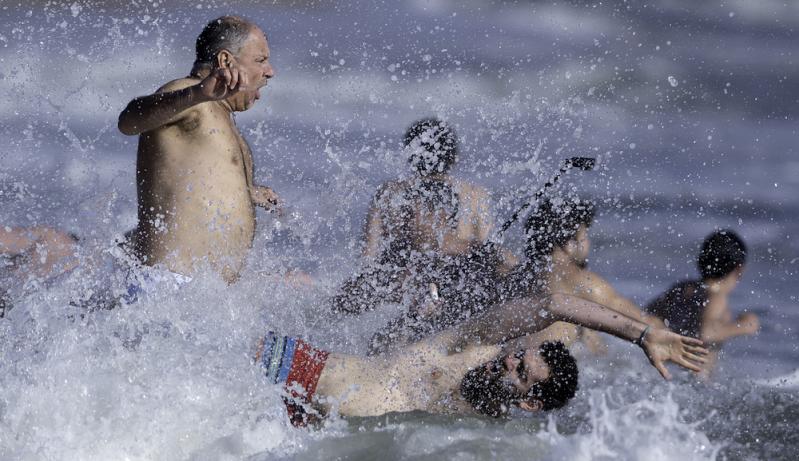 Racing into the Atlantic on Jan. 1. 2019. There will be no official plunges on the first day of 2021.
Craig MacNaughton
By Jack Graves

There will be no organized fund-raising New Year's Day plunges here this year, an unfortunate result of the coronavirus pandemic that hit our shores the better part of a year ago.

So perhaps as many as 600 doughty people — a record 400, for instance, took the plunge two years ago at East Hampton's Main Beach, and 100 in Wainscott and 100 at Gurney's Resort in Montauk — will have to welcome 2021 in other ways.

Colin Mather of the Seafood Shop in Wainscott was the first, in 1999, to make an event of a New Year's dip in the ocean, at the Beach Lane road end in Wainscott, having first run down there from his shop on Montauk Highway with Larry Burns and Richard Klamrogh, a distance of 1.6 miles.

"I can't tell you how many people come up to me and say it's a wonderful way to start the year this way," Mather said after the 2019 plunge.

The Y.M.C.A. East Hampton RECenter youth swim team, the Hurricanes, overseen by the town's lifeguards, and later by its Ocean Rescue Squad as well, followed Mr. Mather's lead soon after, in 2002, at Indian Wells Beach in Amagansett, shifting at the instance of Eddie McDonald to the friendlier confines of Main Beach and its pavilion in 2010.

"It's unfortunate," said John Ryan Jr., captain of the town's guards, "but a mass gathering such as we've become used to could be a possible spreader."

Ryan said he remembered that "the first year we did it, Richie Kalbacher brought down a hot tub on a flatbed truck. The next year some people began to make soup and chowder, and then we filled a truck with donated food that we brought to the food pantry, which gave us the idea to make it a beneficiary. . . . This would have been our 11th year at Main Beach."

This is the first year that the Hurricanes' plunge has been canceled, he said, though it was postponed for three days, because of wind chill in the single digits, on New Year's Day in 2009. Mather's plunge and a plunge at Gurney's went off as scheduled that year, "but after those plunges you can go back inside," Ryan said at the time.

"It was definitely not an easy call to make," Ryan said in a release announcing the Main Beach plunge's cancellation. "The donations from this event have supported so many people and families of our community during tough times. If anyone is interested in supporting the food pantry, donations can be made to the East Hampton Food Pantry by going to easthamptonfood.org."

Likewise, Mather, who said that having to cancel his plunge had caused him to experience "a bit of withdrawal," asked that donations be addressed to the Sag Harbor Community Food Pantry, P.O. Box 1241, Sag Harbor 11963.