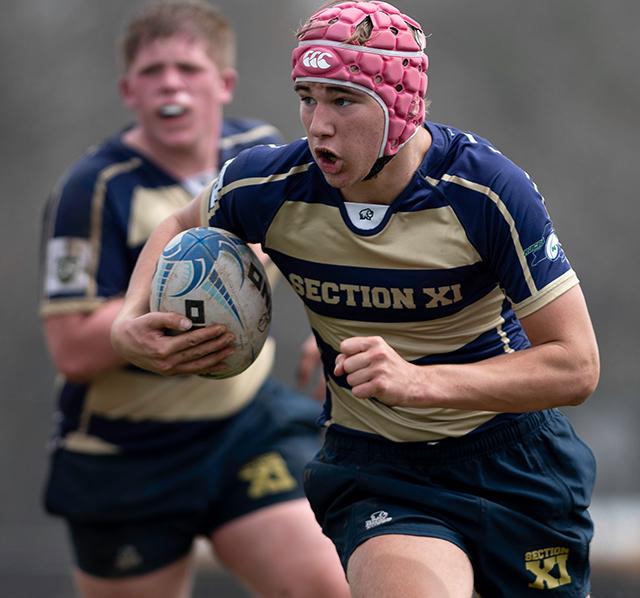 Kevin Bunce Jr., with the ball above, would have competed in his first international rugby tournament in Orlando, Fla., this weekend if he hadn’t suffered a broken collarbone in Sunday’s game with Rockaway.
By Jack Graves

There was hardly room to breathe in Sunday’s youth rugby game at Mattituck High School as the Section XI Warriors, an eastern Suffolk interscholastic squad coached by Kevin Bunce Sr. and Mike Jablonski, and their Rockaway peers had at each other over the course of two 30-minute halves.When the dust had cleared, as it were, the visitors were in the ascendance, by a score of 34-29, a result that might well have been different had not injuries sidelined three of the eastern Suffolk side’s starters, Kevin Bunce Jr., its chief scoring threat, among them. Bunce, a Warriors’ flanker and its kicker, who had set up his side’s second score with a 75-yard run, the longest of the day, at the end of the first half suffered a broken left collarbone “after a 300-pound prop [forward] fell on him sideways,” his mother, Meg, said in an email afterward. He left the field with his arm in a sling.Meg Bunce added that her son, who was to have played this week in an international youth 7s tournament in Orlando, Fla., would be sidelined for a few weeks.In contrast to the metro interscholastic league game of the week before, in which the Warriors had routed Bishop Loughlin 65-29, Rockaway and the Warriors were evenly matched. There was, as aforesaid, barely any letup in the play throughout, though the Warriors in the final minutes couldn’t quite muster the collective energy to score the try that would have tied the score.“We just didn’t have it in the end,” the elder Bunce said afterward. “Really, stamina is the key, and since our kids practice three times a week, while our opponents are practicing five days a week, they need to do some conditioning work on their own. It was a good game, though.”The visitors, who pushed from the get-go, scored first as Christian Appel, the fly half, converted a lateral from Mike Buckawitz, the inside center, following a penalty call on the Warriors within the 22-meter line.A Warrior prop, Jalal Sawas, answered moments later with a try of his own, touching the ball down over the line after the Warriors foiled a Rockaway lineout play not far from Rockaway’s try zone.The Warriors took the lead, at 12-7, midway through the first period when Bunce, having taken the ball out of a Warrior scrum near its 22-meter line, broke away, and, with about 10 yards left, and with Rockaway defenders on him, passed the ball back to Isaiah Johnson, who ran the rest of the way.Johnson then came off the field to have his right ankle taped, but returned to action not long after.Two subsequent 30-yard breakaway runs through traffic by one of the visitors’ wing forwards, Terence Martin, sent Rockaway into halftime with a 17-12 lead.“We’re not out of this, guys,” Mike Jablonski said as the players gathered around, “but you’ve got to start rucking better . . . four or five of our guys are getting sucked into their rucks.”“It’s come down to a matter of wills right now,” said Bunce, “to which team wants it more.”Even without the younger Bunce, and with the subsequent exit of Chris Vetter, the fly half, because of a broken nose, the Warriors played spiritedly in the second frame, though a turnover treated Rockaway’s number-eight man, Bobby Baldrian, to a try in the opening minutes, one that one of the Warriors’ wingers, Colin Winter, got back by way of a 5-yard plunge soon after.Another turnover and a long kick by Buckawitz to a lineout deep in Warrior territory set up a score by Jack Tanzy, one of the visitors’ props, that put Rockaway up 27-17. A brawl almost broke out after the Warriors kicked off, but the ref and the sides’ coaches quickly intervened.A penalty call on Rockaway near its 22-meter line triggered a scoring drive through traffic by the Warriors’ number-eight, Rob Lechner, and Mac Taylor’s conversion kick, which sailed just inside the left goalpost, pulled the home team to within 3, at 27-24, with about 10 minutes left to play, but the visitors were not to surrender the lead thereafter.Yet another turnover, this time by Lechner, whose lofted lateral was intercepted by Buckawitz about 15 yards from the Warriors’ try zone — a converted try that put Rockaway up 34-24 — effectively did the home team in. Jake Jablonski, the scrum half, scored from out of a 5-meter scrum in the game’s final minutes.The win improved Rockaway, which had been soundly defeated the week before by St. Anthony’s, to 1-1; the Warriors are now 2-1. No games are to be played this Sunday. The Warriors are to play host to St. Anthony’s at Mattituck High School on April 28.