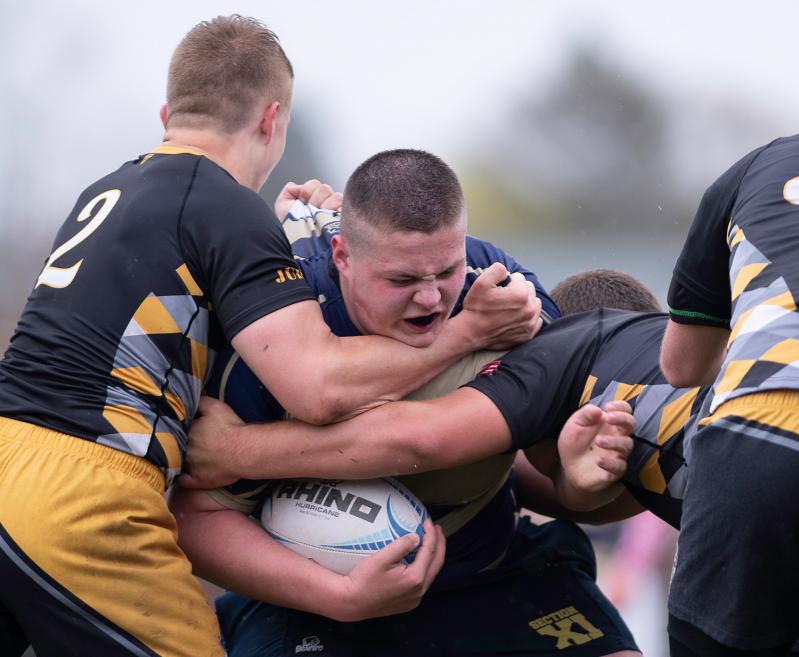 Nick Lavelle, a prop forward from East Hampton, with the ball above, often carries the mail for the Section XI Warriors.
By Jack Graves

“It could have been a lot worse,” Kevin Bunce said Monday, the day after the St. Anthony’s Friars, an undefeated senior-loaded rugby side, had blanked the Section XI Warriors 40-0 at Mattituck High School.Despite the bageling, Bunce, whose co-coach is Mike Jablonski, a former Montauk Rugby Club teammate of his, said he was proud of the way his side, which, owing to injuries, was without three key starters — one of them his son, Kevin Jr., sidelined because of a broken collarbone — had played. “We were scrappy as hell, I think we played really good. We didn’t quit. We tackled over and over. . . . It was a good game.”“Of course,” he said with a smile, “in a game like that you’re going to be doing a lot of tackling.”Going up against a side like St. Anthony’s, whose forwards and backs, transitioning smoothly from phase to phase, moved the ball relentlessly forward from the get-go, was definitely a trial for the younger Warriors, who rarely were able to advance the ball to within the visitors’ 22-meter line. Still, if, as rumored, the West Islip school had vowed to drop 100 points on the eastern Suffolk side, the Warriors can be said to have saved face. “They’ve been beating teams by 70-something, 80-something, 90-something. . . .”Harry Passante, St. Anthony’s coach, who subbed liberally in the second half, volunteered that the essential difference in the teams was owing to the fact that “we practice six days a week.”The loss, which dropped the Warriors to 2-2 in 15s play, “probably put us out of the playoffs” in the Greater Empire Union’s Downstate Division II, said the coach, “but we still have two games left” — the next one on May 12 with the Dwight School of Manhattan — “and then we’ll be going to player ID camps and 7s tournaments up until mid-July.”While wins were nice, “the main thing for all of us in our tight-knit rugby community is to create our own distinct regional select side, just like the West­chester teams in Pelham, Rye, and Keio Academy have on the other side of the bridge — a Long Island side that will go to regional tournaments and to national championships down the line. We have a huge pool of players on Long Island that we’re all trying to move along — we just have to give them the pathway to do it.”High school-age rugby players were increasingly winning scholarships to play the sport in college, he said. Several of Bunce’s local protégés, including Brandon Johnson, Jordan Johnson, and Josh King, have. “Jordan’s at New England College now, but he’s looking to transfer to Mount St. Mary’s in Maryland, where Brandon went. The coach at Mount St. Mary’s is all over our players. Josh just finished” at American International College in Springfield, Mass. “He and George [Calderon] and Steve Turza are playing with Suffolk Bull Moose.”One of Sunday’s spectators, Jerry Mirro, who about 25 years ago taught the Montauk Rugby Club how to play 7s, and who is the head rugby coach at Stony Brook University, said five of St. Anthony’s players would be coming to Stony Brook in the fall.Asked what Mirro had said to him concerning the Warriors’ players, Bunce said, “He loved the way they played. He wants a couple of them to come to Stony Brook. Most of them want to play in college. . . .”Back to Sunday’s game, Bunce and Jablonski, as well as numerous fans, of both teams, were clearly more inclined than the referee to “let ’em play.”“With all the whistles, it was tough to keep possession,” Bunce said. “Though it was kind of exciting with all the running and tackling, there was no continuity to speak of, no rhythm. It was like football — a series of downs.”Bunce, in reffing the first of the three home games played last month in Mattituck, rarely blew the whistle. “Only when it was something potentially dangerous,” he said.Before parting, he said, “We wouldn’t be able to do this if it weren’t for our sponsors,” a long list, he said, that included “Bistrian Sand and Gravel, Dan Voorhees, Charlie [Whitmore] and Sons, Chris Carney of Railways Fitness, and Scott and Holly [Rubenstein] of East Hampton Indoor Tennis. . . . They’re all from this community and they’re really helping our kids, allowing us to travel so that they can be seen by coaches.”Given that St. Anthony’s practiced six days a week, “we’re doing really phenomenal,” said Bunce, whose charges practice at the most three times a week.The Warriors are practicing now on Thursdays from 5:30 p.m. to dark, and on Sundays from 10 to noon at Veterans Memorial Park off Route 25 in Calverton. Everyone is welcome, Bunce said.