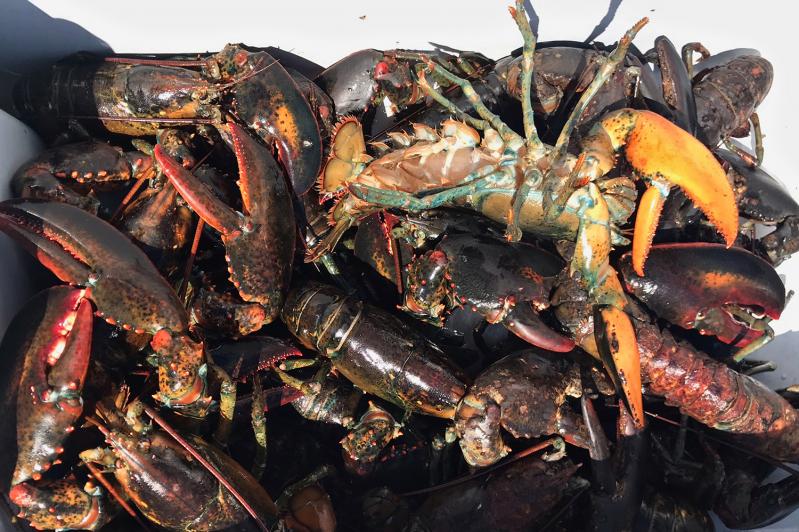 The high market price of lobster made Jon M. Diat’s haul from his own traps all the sweeter.
Jon M. Diat
By Jon M. Diat

As I perused the selection of seafood on display at Schiavoni’s in Sag Harbor the other day, an elderly gentleman peering into the saltwater holding tank with about a dozen lobsters in it said to me, “I’d love to buy one, but not at this price.” At an eye-popping $24.95, “lobsters now may as well be gold-plated,” he said. “It’s crazy. I think I’ll stick to hamburgers tonight.”

I knew what he meant. The price of lobster — fresh or frozen — is at an all-time high.

Why is that? That steamed lobster dinner or buttery lobster roll that sits perfectly plated before your eyes is very expensive for a simple reason. It’s economics 101: supply and demand.

As an example, up in Nova Scotia — a huge producer of lobster for the world — the price paid to those who commercially trap the crustacean, recently hit a historic high of just over $17 per pound dockside (using the current exchange rate). Here in the United States, prices are also at peak levels and are not far off from our neighbors to the north.

Over the next few months as the demand remains strong, the price of lobster will likely slip down a bit, but not significantly, even as more lobstermen in the U.S. and locally start to drop their gear in the water. The lust for lobster remains intense, and it’s just not just here but in many areas around the world, including Europe and especially Asia in general and China in particular. Price be damned. Demand rules. People want lobster.

Locally, retailers or restaurants that offer lobster are acutely aware of the supply and demand issue. “If people want lobster, they still will buy lobster,” said Alex Fausto, the manager of the Seafood Shop in Wainscott for nearly 25 years. “And as we get closer to Memorial Day, the demand will be even stronger as more people show up.”

Wesley Peterson, a former draggerman and an owner of the Montauk Seafood Company, agreed. “It’s a bit of a different economy out here on the East End,” he said Sunday. “If someone wants sea scallops or tuna, they will still purchase it if it’s what they want for dinner. Price, in some cases, is not much of a concern.”

Last Thursday, it was finally time for me to check my own lobster traps for the first time. At the end of the day, it was not exactly a pot of gold, but I was able to retain about 15 keeper-size lobsters. A respectable catch, but it was down rather significantly from recent years.

Still, it was nice to enjoy a hot lobster dinner and a few lobster rolls over the next few days.

As for the local fishing scene, Ken Morse over at Tight Lines Tackle in Sag Harbor was enthused about the consistent striped bass action along the ocean beaches. “I’m not aware of any keepers yet, but the action has been really good on small bucktail jigs,” he observed.

Morse was also excited to learn firsthand that large porgies have shown up on the west side of Jessup’s Neck. “It was nice to get some reports back from the bays that the porgies are here in good quantities,” he said. He added that weakfish and striped bass have begun to make their presence felt, and that fluke should be around when the season opens on Wednesday.

Mashashimuet Park's History and Future
A Conference for Young People to Create Solutions
Get Outside, Get Moving
END_OF_DOCUMENT_TOKEN_TO_BE_REPLACED