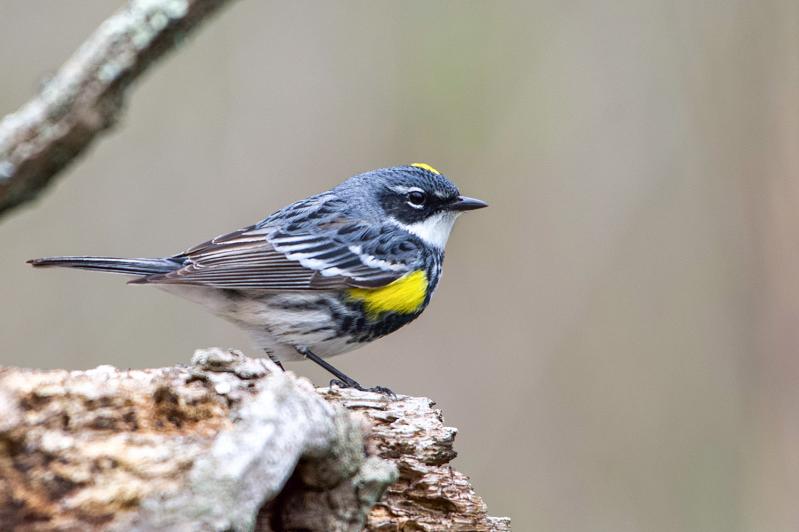 A yellow-rumped warbler donning its spring attire. No matter the season, this warbler is known by its four patches of yellow.
Jay Rand
By Christopher Gangemi

The yellow-rumped warbler, also known, colloquially, much to my 10-year-old’s delight, as a “butter-butt,” is our only regular winter warbler and our region’s most abundant.

The high total on the Montauk Christmas count came in 1947 when 3,500 were tallied. Until the 1960s, it was not uncommon to have over 1,000. In the last 20 years, we’ve been lucky to count 200 in Montauk. Still, it’s always the only plentiful warbler found on the count.

The yellow-rumped warbler puts on its biggest show during fall migration. According to John Bull, in “Birds of New York State,” in migration it often outnumbers “all other warblers combined.” Indeed, in the fall migration of 2012, an expert birder counted nearly 16,000 off Robert Moses State Park.

Just like humans, birds wear different “clothes” at different times of the year. In the winter, the yellow-rumped warbler shows a smoggy brown head and back with gray wings, each with two wing bars. Its throat is pale, its chest streaky. In the spring, the bird transforms into a striking blue-gray, black, white, and yellow puzzle of contrasts. Despite the changes, Frank Chapman, in his 1901 book, “Bird Life,” explained, “this warbler may always be known by its four patches of yellow.” The patches don’t move, despite the season. There is one on each side, just below the wing, a small patch on the top of its head, and, of course, a prominent patch on its rear, seen most easily in flight.

Like most warblers, the yellow-rumped is tiny — smaller than a sparrow — and quite active. Despite their size, they’re easy to see in the winter because they’re eating berries, which are normally low to the ground. In fact, they are also sometimes referred to as the myrtle warbler because of their fondness for myrtle berries. Long Island is at the northern border of the range for myrtle, but we get plenty of yellow-rumped warblers because they also love bayberry and juniper, both of which grow readily here.

So now you know what to plant If you’d like to attract winter warblers to your yard. Apparently, they also will eat poison ivy berries if nothing else is around, but I can’t suggest planting any of that. On a birding trip I made to the South Fork Natural History Museum last fall, I found three to six in every juniper tree. In general, planting native bushes and trees that fruit in the winter supports birds.

I believe it was Mary Oliver who said myrtle warblers kiss the air, but I could be wrong. Whoever said it was right. Once winter ends and the yellow-rumped starts to hunt insects, watch, and you’ll see why. Last spring at Barcelona Neck, a brown blob of insects stood out like a coffee stain on the sky. There must have been thousands, tracing tiny little patterns in the sky, tightly packed. What were they doing up there? Among other things, they were being food. A yellow-rumped warbler parked on a nearby branch and sallied through the cloud again and again, kissing the air.

Even when this bird isn’t in sight, it can be identified through its call note. In the winter, birds rarely sing, but they still communicate with these short notes. David Sibley describes the call of the butter-butt as a “flat chep.” So, if you say “chep,” it will give you an idea of what to listen for. Go ahead, say it. I dare you. “Chep.” It takes a little time to learn this note, but it’s a very useful tool for spotting them.

In the spring, specifically from the middle of April until early May, if the winds are blowing southwest, these birds descend on our woodlands. If autumn provides the best opportunity to see huge numbers of yellow-rumped warblers, then spring presents the best opportunity to hear them. My favorite description of their song comes from an old book published in 1936 called, “Birds of America” by T. Gilbert Pearson.  Mr. Pearson described the song as a “ ‘sleigh-bell trill,’ a tinkling little warble usually involving the reiteration four or five times of the same note, which is followed by two or three a little higher or lower.” The only thing the description lacks is mention of the way the song softly emerges and then evaporates. It’s a hint of a song.

So, now imagine being in the woods, say at Cedar Point, in the spring. The peepers are starting to peep, insects are starting to buzz, and in the treetops all around you, are these warblers. Each with their soft loose trill, chasing one another, high and low, a proper spring flock. These are excited birds, heading north to breed, moving through woodlands as they go, eating their first insects of spring. It’s hard not go get caught up in their enthusiasm. It seems naive and young — it is — but that’s why it can be such a tonic, especially now. Get caught up. Say “chep.”

But the yellow-rumped is just passing through, and by June, July, and August, this bird is absent from our area. Perhaps it has found a balsam or spruce somewhere in the mountains of New York, New England, or Canada, and built a nest, maybe lined with moose hair.

I’ll admit, when warbling in the spring, in search of something unusual, I have said, “Oh, it’s just a yellow-rumped” more times than I can remember. This is a weakness, this constant searching for the next thing. Turns out I can be guilty of scrolling, even when I’m not staring at a screen.

Yes, this is an abundant warbler, and thank goodness for that.

Many interesting avian visitors are coming to feeders right now. Lee Johnson had a pine warbler visit his East Hampton property, and Jo Ann Secor had a few yellow-rumped warblers visit her Sag Harbor birdbath. Ellen Stahl has had a Baltimore oriole at her place in Noyac. Two years back, she hosted a summer tanager all winter, so she has a special knack for attracting uncommon winter visitors to her yard.

Out east, Steve Biasetti found an elusive, yellow-breasted chat at Third House in Montauk. Another chat has been seen on a trail behind the bathrooms at Montauk Point.

Finally, it’s gull season. A couple of beautiful Iceland gulls were seen at Ditch Plain in Montauk on Friday, along with a handful of Bonaparte’s gulls.

Also, thanks to the many readers who wrote in response to the column about the mystery robin roost. Let’s hope that despite the two-plus feet of snow we received, they’re okay, roosting somewhere. Other bird news, sightings, or matters of interest can be emailed to [email protected].