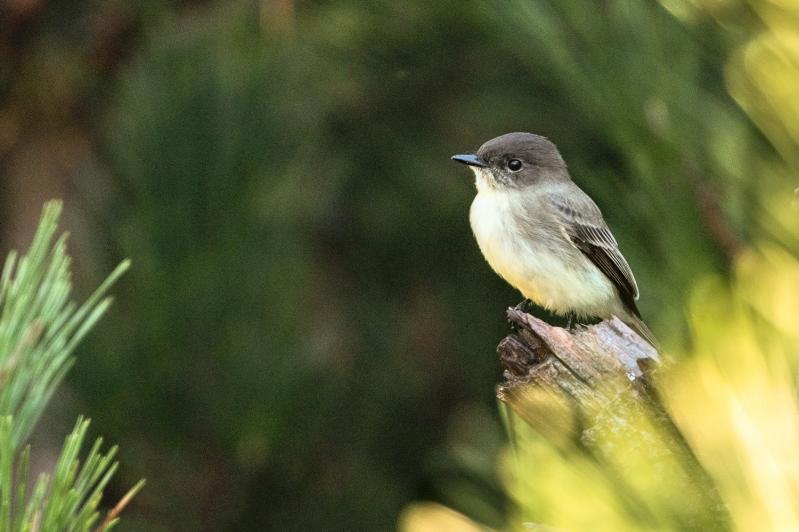 The eastern phoebe, one of our earliest spring migrants, is just starting to show up on the East End after a winter down South. Arriving phoebes carry the promise of coming warmth and humidity, bird and frog song, the humming buzz of insects, and lack of parking. Despite their slushy color, these birds bridge the gap between the first stubbornly cold days of spring and the “May flowers” portion of the season. When the trees are getting buds, the forsythia is starting to bloom, and the daffodils are pregnant, that’s when they show up.

The eastern phoebe has a lot more character than its drab gray plumage would suggest. It’s the people’s flycatcher. A workhorse, not fancy, the gray Subaru Forester of the flycatcher family.

One time, I counted 12 phoebes at the South Fork Natural History Museum. Camp Hero, in Montauk, is also a good spot, as is the Long Pond Greenbelt. They’re widespread, but almost always alone.

They’re smaller than a sparrow, dark gray above and white below. Sometimes, if you get a good look, you will see a tinge of yellow white on their flanks, close to their legs. The head is darker than the rest of the body, so it appears large. The shape of the head also stands out: It’s rather long and flat. The bird appears stocky and neckless. The tail is prominent, with a noticeable notch. Not as noticeable are two weak wing bars, horizontal bands of dull yellow.

Its song is simple. It repeatedly says its name, “phoebe.” The “fee” part of the song is clear and high, with a squeaky quality. The “bee” is lower and has a burry, buzzy, or at times flatulent sound. Apart from its song, it has a distinctive call note. David Sibley, in his “Field Guide to the Birds of Eastern North America,” describes it as a “simple chip: high, clear, and descending.” Learning the call note is helpful when trying to find phoebes in the field; they use it often.

Many birds are known to move their tails. The hermit thrush raises its tail quickly and then slowly lowers it. The spotted sandpiper and palm warbler both repeatedly pump their tails. The phoebe sort of wags its tail in a circular motion. It’s very obvious, and even a useful field mark when trying to identify the bird. Because it wags its tail constantly, it seems happy, and that, in turn, makes me happy.

Phoebes are not shy and they’re fun to watch when they hunt. They find a conspicuous perch, whether on a wire or at the end of a branch, from which they “sally” out to capture a flying insect. They may be forced to acrobatically chase the insect a second or two, but they usually loop right back to their perch, or close to it, after they’ve captured their meal. So this is an easy bird to spot and identify.

George Gladden, in “Birds of America,” edited by T. Gilbert Pearson, catalogues a whole host of insects that the phoebe eats. East Enders will find it nice to know that phoebes eat ticks and wasps, midges and flies. That’s right, they eat ticks! But they also eat many other pests and are particularly beneficial to farmers for this reason.

“Let the phoebe remain just where it is. Let it occupy the orchard, the garden, the dooryard, and build its nest in the barn, the carriage house, or the shed. It pays ample rent for its accommodations,” writes Mr. Gladden.

They’re economical. They reuse their nests, or occasionally use a nest built by another bird. John Bull notes their diversity and adaptability of nest building, no doubt an asset. “Nests have been found in such diverse locations as under bridges, eaves of barns, overhanging edges of road banks, upturned tree roots, on wooden ledges of country houses, and on rock ledges and cliffs.”

They use mud to glue their nests to a structure, and then mix in moss, leaves, grass and animal hair. They unfailingly decorate the outside with green moss.

Because my interests are somewhat out of step with what you might call a “regular” person, I have a pair of favorite phoebes. They’ve nested above the same door in Sag Harbor for the last five years. By April 16 last year, the female had already laid two eggs. By April 28, she had laid five. She was still incubating the eggs when I returned on May 11, but by May 15, her young were hatched.

I visited last week and saw only one phoebe, singing emphatically. It’s a bit early. Maybe with today’s warmth, and southerly winds, we can expect more phoebes to arrive this weekend. I will give updates on their nesting over the next five to six weeks.

We’re only a month and a half away from brand-new phoebes, people. Try working that into your next dinner party conversation. Beats talking about real estate, no?