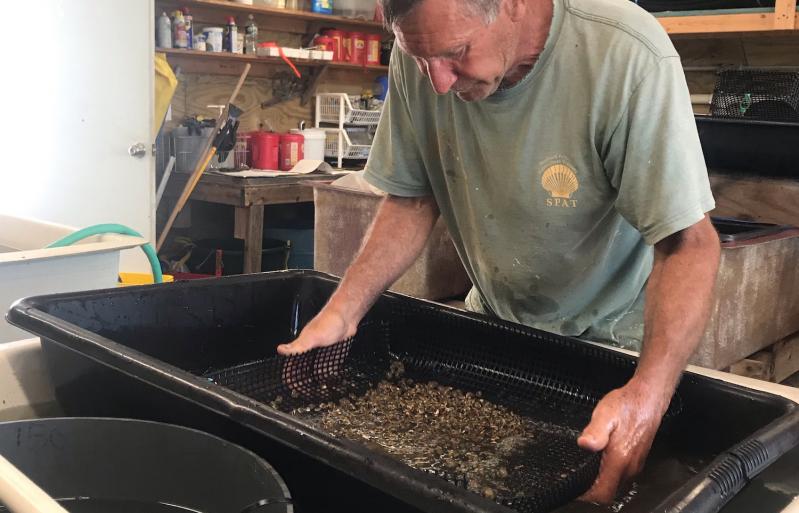 While there was a 10-knot breeze coming off Noyac Bay, it was unbearably hot on the morning of June 30 at Cedar Beach on the southernmost edge of Great Hog Neck in Southold.

The air was thick with humidity, with a "real feel" temperature that approached 95 degrees. I pulled down my hat to absorb the beads of sweat that had formed on my forehead as I walked around to the back of the Cornell Cooperative Extension Marine Center. Despite the oppressive heat, I wanted to ensure that I would receive my yearly allotment of 1,000 oyster spat that would ultimately be raised to maturity at my dock.

"Boy, it's a hot one today," said Kim Tetrault, the longtime chief oyster guru at the facility, who seemed rather nonplussed by the jungle-like heat, as he bounded about the jigsaw-like maze of floating docks and rafts on the inland cove. He was, as usual, checking on the dozens of holding cages and barrels where oysters of all sizes resided in the relatively cool water.

Several volunteers also bandied about the facility, and three women were there culling out their share of oysters, which, for a $150 yearly membership fee, also includes monthly seminars that Tetrault administers. It's a great deal.

Tetrault, who recently moved from East Hampton to Southold, knelt over to pick up one of the large blue holding barrels in the water that contained thousands of young oysters that were hatched in late March. The oysters, upon inspection, were not much larger than a very small kernel of corn. Yet, by next summer, a majority will have grown to three inches or more in length in my vertical net cages.

"As these oysters are so small, I'm going to sort them through some mesh netting to get the largest ones for you," Tetrault said as I followed him into a building where scallops and clams were also being raised. Filling a large plastic tub with salt water, Tetrault then put several cups of the young spat on a small screen and shook the tray vigorously in the water. The process was repeated several times until he ended up with what amounted to about half a pint of oysters that were now ready to be relocated.

Oysters now in hand, Tetrault was then eager to take me over to the building next door where juvenile scallops were recently hatched. Way too small for the naked eye to see, the scallops could only be viewed under a microscope via a video monitor.

A mere droplet of water contained well over a dozen embryonic scallops. "You can see the daily growth ring on them," Tetrault remarked in amazement, as he pointed to the distinctive rings of the scallops' outer shell, as the bivalves moved about innocently. The young scallops were less than a week old.

Scallops are much more difficult to raise than oysters, even in a controlled environment. As any bayman can attest, the past two seasons have brought extremely poor catches of bay scallops in East End waters.

"There are several theories on what the problem may be," Tetrault sighed in frustration. "Whether it's water temperatures, parasites, brown tides, or a combination of all things, scallops are very vulnerable after they spawn in June. It's a very stressful period of their life, and the adults of late have had a very tough time surviving. They are extremely delicate creatures."

Fingers are crossed that the scallops will survive the summer and a harvest will be found in early November when the season opens. As for the handful of oysters I took home, I hope my crop of spat will thrive in the warm, plankton-rich waters behind my house. But then again, Mother Nature is not always predictable.

As for those wetting a line for fish, the action has been good in many locales. "Plenty of big bass are still being caught in the rips in Montauk," said Harvey Bennett at the Tackle Shop in Amagansett. Bennett himself took time off from the shop at the end of the day on Sunday and did well casting from shore for smaller bass near the old fish factory on Napeague. "The action was great and I had the beach all to myself. Not bad for a July Fourth weekend."

Bennett added that there are "plenty of bluefish roaming about Gardiner's Bay, and the porgy and sea bass fishing is good in many areas. And don't forget about the blue-claw crabs. They seem to be everywhere this season."

As a reminder, there are only a few days remaining to sign up for the Montauk Youth Fluke Tournament. Dante Speranza continues to lead the pack with his 7.26-pound fish. The tourney is open to anglers 16 and under, but the last day to sign up is next Thursday. The $25 entry fee in cash or check can be mailed to Capt. Tim O'Rourke at P.O. Box 2120, Montauk 11954.

The Montauk Marine Basin is the official weigh-in station and Courtney behind the counter there can also accept some sign-ups. As usual, proceeds raised will go to the Tyler Project, a program to increase awareness and improve the coordination and delivery of mental health services for students, young adults, and families on the East End. Additional donations are also most welcome.