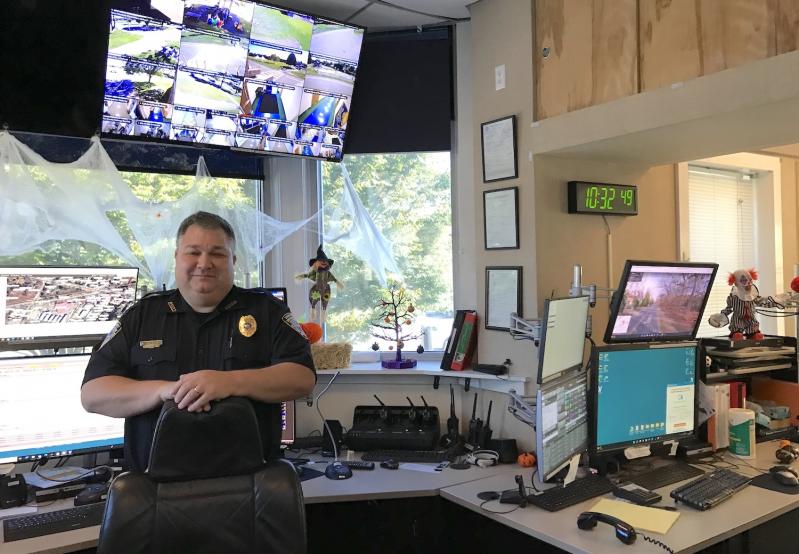 J.P. Foster, who heads the East Hampton Village Communications Department, is proud of his 16 fellow dispatchers, who are the first point of contact on emergency calls and trained to relay information to first responders and give guidance over the phone.
Christopher Gangemi
By Christopher Gangemi

“About the only thing we’re not prepared for is a zombie apocalypse,” said Caitlyn McAuliffe, a public safety dispatcher with the East Hampton Village Emergency Communications Department.

However, if you are being chased by zombies, there is one question that you must answer when you call 911 for help: “What is the address of the emergency,” said Gerard Turza Jr., a public safety dispatcher supervisor. “We need to know that first.”

“When you call 911, you have to know where you are,” agreed Brittney Lloyd, a dispatcher who has been in the department for nearly eight years.

People see firefighters in their trucks, police officers writing tickets, and ambulances streaking by, but they don’t see the public safety dispatchers. Right now, as you read, a few of them sit in a darkened room, lighted only by computer screens, answering 911 calls in East Hampton Village’s Emergency Services Building at 1 Cedar Street. They coordinate any emergency response in East Hampton Town. Without them, the guy on the beach having a heart attack doesn’t get saved.

“Everything comes into us, it’s really kind of insane,” said Mayor Jerry Larsen, who, as a former village police chief, was in charge of dispatch for seven years. “Most people have no idea their phone call is going to East Hampton Village.” The village dispatches for the East Hampton, Sag Harbor, Springs,

Amagansett, and Montauk Fire Departments and their ambulances.

J.P. Foster heads the Emergency Communications Department, which includes dispatch. He has been in the department going on 33 years and is proud of the 16 employees who work under him. “You can’t dispatch any better than our guys and girls,” he said over the phone.

“We can have six dispatchers operate in the room at once,” he said, “but three is the minimum.” When a call comes in, one dispatcher categorizes the seriousness of the call, extracts information from the caller, and enters it into the Computer Aided Dispatch system, or CAD. Each dispatcher has access to the CAD, which updates in real time. Depending on the information input by the call taker, the other dispatchers know which departments need to be notified. If a dispatcher sees a blue light, they radio the police; a red light indicates the Fire Department, while a green light tells them to put together an ambulance team.

“You get calls with all three colors,” said Mr. Foster.

This all happens within seconds. Once help has been summoned, the dispatchers do all they can to help the caller with their emergency. This process, which involves a series of questions, is called Emergency Medical Dispatch (E.M.D.).

“By the time the first responder is on the road, dispatch has already given them a patient update. That’s the purpose of all the questions. People get frustrated, but they’re not delaying the response. They’re giving the responders more information,” said Mr. Foster. Dispatchers are also specially trained to give guidance over the phone.

“We can do everything from CPR to childbirth,” said Mr. Turza. “Tourniquets. We can take a car out of submerged water. We have instructions for electrocution, or for people who have set themselves on fire.”

Mr. Turza sits in a large leather chair behind a desk over which many stacked computer screens loom. There are maps, security camera feeds, and an entire screen dedicated to monitoring emergency radio channels. A microphone over his keyboard allows him to radio departments while he watches and types simultaneously. He’s sort of like the Wizard of Oz, but in a blue police uniform behind deeply tinted windows, pulling the levers to gather appropriate emergency resources.

“Everything is stacked against you when you pick up the phone,” he said. “We have no control over what’s going on out there.”

Out there the sun is bright. Inside it’s all screen glow. Over Mr. Turza’s desk, two young boys walk across a field and past the watchful eye of a security camera at the John M. Marshall Elementary School. The phones aren’t ringing, which is a good thing, but dispatchers don’t use the “Q word.” Quiet.

“Anything can happen in 10 seconds,” he said, eyes still stuck on the screens. “Right now, nothing is going on, but there’s no way to predict it.”

The phone rings and the room fills with a mixture of expectation and possibility. A burglar alarm. False. Seconds later, another call. This time from a school resource officer, who lets the dispatchers know about a lockdown drill. Mr. Turza monitors the hallways from his chair. Still quiet.

They field all sorts of calls from, “a napkin is on my lawn” to “grandma tripped and fell” to “there’s a baby in the bottom of a pool.”

“What you consider an emergency, I may not. But it’s not my job to decide,” said Ms. McAuliffe. “If you call and want help, you’re going to get it regardless of what it is.”

The random nature of the phone calls adds to the stress of the job. Whatever is happening on the other end of the line, the dispatchers need to be steady.

“You want to be prepared to help when the time comes. You don’t know what’s going to be asked of you,” said Mr. Foster. Continuing education, based loosely on what sorts of emergencies happen seasonally, is constant. In the spring when pools open, the dispatchers may brush up on their drowning protocols. In the winter, maybe it’s how to help someone who has fallen through ice in a pond.

“We have to provide a standard product to the public,” said Mr. Turza. “You make a call, I pull up a screen and no matter what, you’re going to get the same thing. I need the address, cross street, telephone, what is the problem.”

Treating their interactions as a product, and identifying standards both help “dehumanize some of what we have to do,” he said. It’s not easy to stay dispassionate when someone on the other end of the phone line is screaming. “We try subtly to put things in context for people. There’s a lot of psychology and understanding human behavior to it. We keep a calm tone; we repeat their names.”

“Our dispatchers live in this community. The people we serve, we know. You can have someone die on the telephone. Not every day is rainbows and unicorns here,” said Mr. Turza. “The caller is the wild card.”

If that’s not enough, dispatchers are also responsible for people who walk into the Emergency Services Building to report a crime, or ask a question. “We’ll have people in the lobby screaming because they got a parking ticket, meanwhile Brittney is on the phone talking a woman through childbirth,” said Mr. Turza.

“It’s hard to be in a room all day,” said Ms. Lloyd. “After a 911 call where you were just helping someone through their worst day, you have to answer the phone again when it rings. You don’t know what it’s going to be. Could be a seal on the beach.” They all agree that it’s important to get out of the room to look at the sun and decompress, but it’s not always easy to do that.

“We do it to help the community, but sometimes it’s like, ‘Aw shucks, no one knows we’re here,’ “ she said.