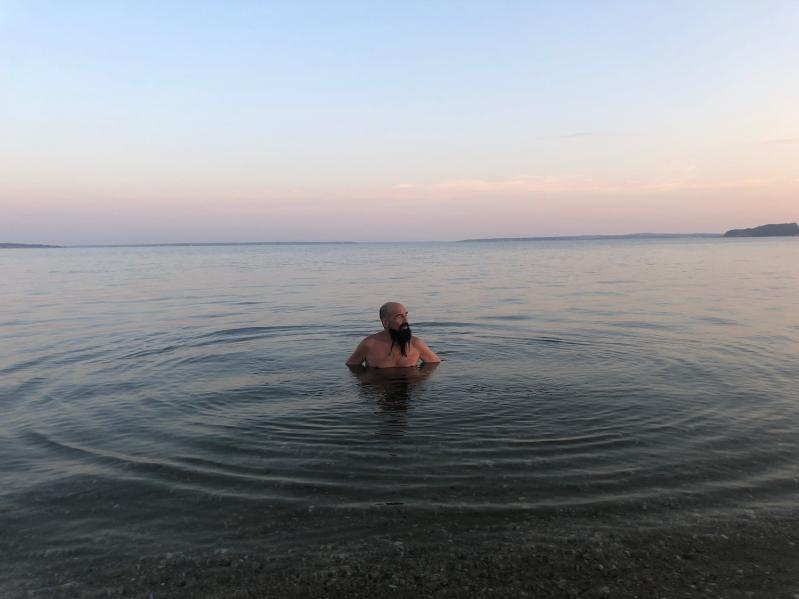 Bryan Downey took this picture of Keith Viagas on July 23, when he encountered him swimming at dawn at Long Beach.
Bryan Downey
By Christine Sampson Christopher Gangemi

Bryan Downey, a Sag Harbor photographer, filmmaker, and carpenter who had talked with Mr. Viagas at Long Beach two and a half weeks ago, said Tuesday morning that he had called Southampton Town police after reading about the body that had washed ashore in the vicinity of Bay Point. The description police provided matched that of Mr. Viagas, who had been swimming off Long Beach the day Mr. Downey encountered him. It was dawn and Mr. Downey had been cleaning the beach, as is his custom.

About a mile from where he met Mr. Viagas, Mr. Downey had found "a backpack and a small cooler full of prescription drugs," which he put in his Jeep and had intended to turn into Sag Harbor Village police. Before doing so, he said, he checked the bags for some kind of identification and found that they belonged to Mr. Viagas. He returned them to the address on the ID, on a Noyac street that dead-ends on Sag Harbor Cove. Not finding Mr. Viagas at home, Mr. Downey went back to the beach, where he found him, "looking a little distraught." He told Mr. Viagas that he had found his bags and dropped them off at his address and then gave Mr. Viagas a ride home.

Update, 3:15 p.m. Monday: Lt. Susan Ralph said in a press release that  Southampton Town police are trying to identify the man who washed ashore in Sag Harbor Cove Monday. He is believed to be between 40 and 50 years old, she said. Anyone who has information can contact the town detectives at 631-702-2230.

The original call came in at 11:43 a.m., Lieutenant Ralph said. The county medical examiner has removed the man from the beach.

Update, 3 p.m. Monday: Southampton Town Police Detective Tim Wilson said on scene as the investigation continued that "no foul play" is suspected in what he described as a "water-related death."

Detective Wilson said the victim, a male, had a large, bushy beard that made it difficult to determine his race. He was wearing a black T-shirt and black water shoes and was "in the water for a while," the detective said.

Originally, 2:39 p.m. Monday: Southampton Town police officers, detectives, and bay constables along with the Suffolk County medical examiner are responding to an unidentified beach in the vicinity of Bay Point in Noyac, where a body has washed ashore.

Lt. Susan Ralph of the Southampton Town Police Department confirmed at 2:30 p.m. that there is an investigation underway, but said no additional information was immediately available.