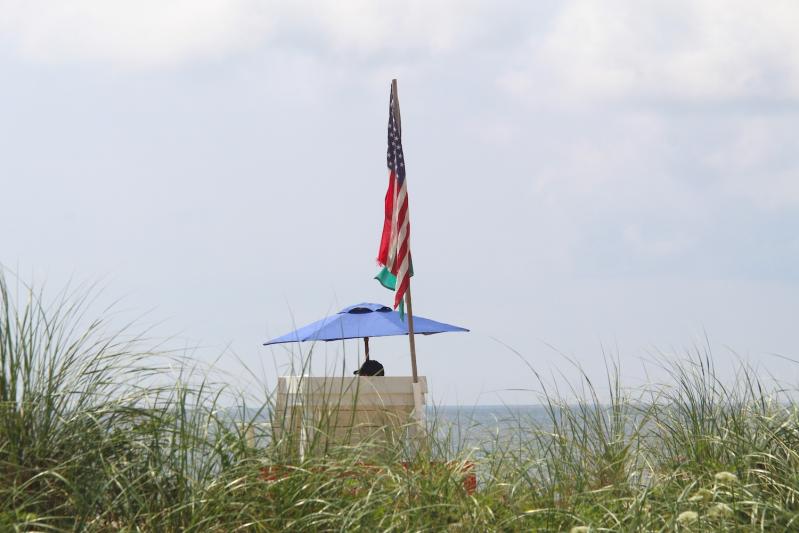 Just because there is flat water doesn’t mean lifeguards can relax. It was a green-flag day up at Maidstone Park last Thursday when guards needed to call in a Jet Ski for assistance for a father and son who were swimming in the calm waters but got too close to the jetty on an incoming tide, according to John Ryan Jr., chief of East Hamtpon Town’s lifeguards.

The tide was pushing from Gardiner’s Bay into the Three Mile Harbor channel, creating a strong current against the jetty. Three lifeguards were working. One stayed on the tower, one stayed on the jetty to warn boats about the swimmers, and another took to a paddleboard to help the father and son who were clinging to pylons at the end of the jetty.

“The lifeguard on the paddleboard also got sucked into the current, and now we had a lifeguard, a father and his son hanging onto the side of a paddleboard, with boats coming into and out of the channel,” said Mr. Ryan. The lifeguard on the tower was able to call for Jet Ski backup, and Mr. Ryan and another guard brought the Jet Ski from Atlantic Avenue Beach in Amagansett to help get everyone out of the channel.

“Whenever you go into the water, stop, look, and see what’s going on,” said Mr. Ryan. “Read the trouble spots. Know what the tide is doing.”

He described another situation at Maidstone Park where the wind was blowing offshore, and a man got pushed much farther out than he expected. “His intention was not to go so far offshore,” said Mr. Ryan. “Mother Nature’s intentions are always different than ours.”

East Hampton Village’s chief lifeguard, Drew Smith, was happy to report that with many green flag days in the last week, there were no saves necessary at the village beaches.

However, he said, the Tuesdays at Main Beach music events have grown in popularity with estimated crowds of 3,000 people. Lifeguards stay late on Tuesdays to staff the event. Mr. Smith said if there are any safety concerns during the event, water-related or not, the best thing to do is to go to a lifeguard tower.

“All of the departments are in communication with one another,” he said. “It’s easier to find a lifeguard tower than a person in a crowd.”