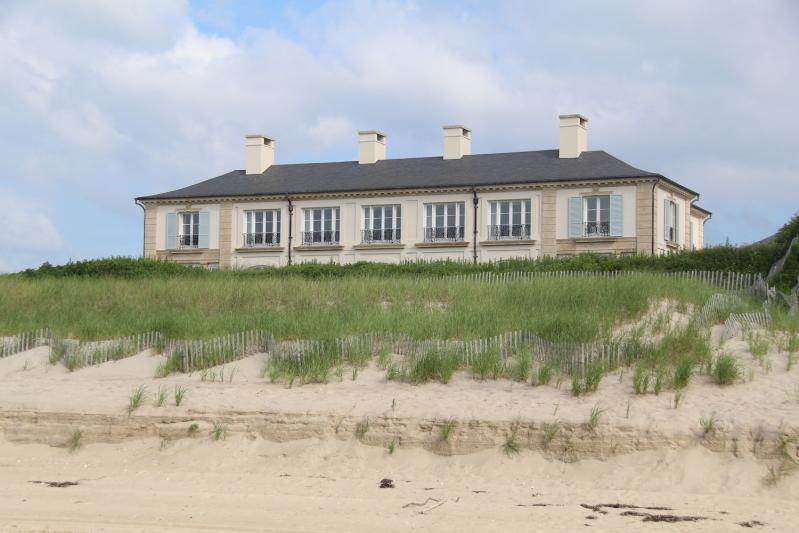 Firefighters from East Hampton, Sag Harbor, and Amagansett fought a blaze at an oceanfront estate in East Hampton Village that began in a barbecue grill and spread to the house on the evening of July 5.

According to East Hampton Fire Department Chief Duane Forrester, it took about two hours to extinguish the flames and check for leftover pockets of embers at 171 Lily Pond Lane. The house is owned by Lewis Sanders, according to public records. The effort stretched late into the night. Crews drove the last of the trucks back to their firehouses by 1 a.m., though the chiefs remained on scene for another hour or so.

“The way the house was constructed made it difficult to get to some of the spots we needed to get to,” Chief Forrester said. “The guys did an excellent job. They made a great stop and kept the damage to a minimum, to a few rooms on the first floor. There are a couple rooms on the second floor where we had to do some overhaul,” to stop the flames from spreading farther.

The house was occupied by the homeowners and several staff. Everyone got out safely, and no injuries were reported.

The call came in shortly before 9 p.m. “Manpower requested to the scene,” a dispatcher was heard to say on a scanner.

It took about seven minutes for a call for mutual aid to go out to the Sag Harbor Fire Department, and another five minutes for Amagansett to get the call. Springs firefighters stood by at East Hampton’s headquarters in case of another emergency. Two ambulances were on scene to make sure no one was injured.

“Whatever they had going on with the fire initially was separate from gas shutoff,” Chief Forrester said. “One of the things we do in a structure fire is, we start securing utilities. We had to shut off the power to the house and make sure the generator was turned off. We had to turn the gas off.

We did get good info from them and we were able to get everything shut down.”

The exact cause of the fire is still under investigation.