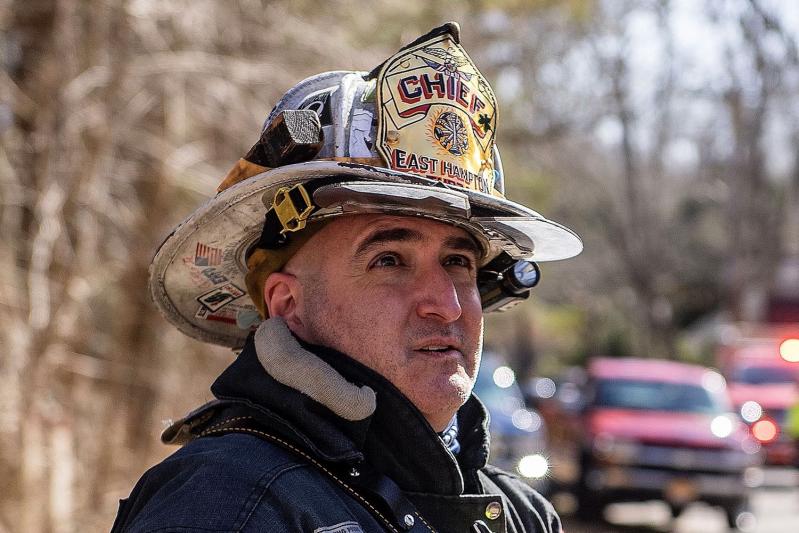 After four years as chief of the East Hampton Village Fire Department, Gerard Turza Jr. will hand over the chief’s cap to Duane Forrester.
Michael Heller
By Christopher Gangemi

“It’s been my pleasure, and honor, to serve as the village’s chief engineer for the last four years,” East Hampton Village Fire Chief Gerard Turza Jr. told the village board on Friday.

Mr. Turza, who did not run for re-election as chief this year, has served with the fire department for the last 17 years; before that, he was in the Bridgehampton Fire Department for 13. His four-year term as chief included the very difficult years of the Covid-19 pandemic.

“Twenty-seven of the 30 years, I’ve either been an elected officer or appointed to some type of position,” he said in a telephone interview this week. “It’s been a long ride so far.”

The new chief will be Duane Forrester, who has been first assistant chief under Mr. Turza for the last three years. “He’s ready to step up and take over,” said his outgoing boss.

“Seven years ago, when I came to my first village board meeting, if you were to tell me seven years later we’d be doing this remote, I think everyone in the room would have laughed. But it just goes to show that you never really know what’s going to happen from one day to the next,” Mr. Turza replied.

His “favorite project” over the years, he said, was the creation of the department’s substation in Northwest, recalling by phone that it had been “decades in the making.” The land was cleared in August 2019, but not long after, the pandemic hit. Although most construction projects were shut down, the substation was deemed “critical infrastructure,” and work continued. With its completion, all residents of Northwest were within five miles of a firehouse, and saw significant reductions in their fire insurance.

“It enhanced our operations tremendously,” Mr. Turza said. “It was stressful, but fun.”

At the board meeting, speaking of the coming fleet upgrade, he announced that the village will receive five “major pieces of apparatus” early next year. Typically, he added by phone, the trucks have a roughly 20-year replacement cycle. Many of the trucks in the current fleet date to the 1990s, he said, and their electrical equipment is very outdated, which can be dangerous.

Even with the best equipment, though, “it comes down to the people,” he told the village board. “You folks have some great people working for you, and I’ve had the pleasure to work with them.”

“As board liaison to the fire department, I would like to thank Chief Turza,” said Tiger Graham. “He educated me as to what the fire department needs, and what they want, and how they work. I think that probably made me a better partner for him, but he’s done a fantastic job.”

“My term started in 2018,” said Rose Brown, a board member. “As soon as I reached out to you, I felt it was a collaborative effort to make sure the fire department has all the equipment and apparatus that they need to do the important job that they do. I thank you for your leadership.”

Chief Turza isn’t going too far. He may be stepping down as fire chief, the mayor said, but “his main job is supervisor in our communications center,” and there he will remain.

Mashashimuet Park's History and Future
A Conference for Young People to Create Solutions
Get Outside, Get Moving
END_OF_DOCUMENT_TOKEN_TO_BE_REPLACED