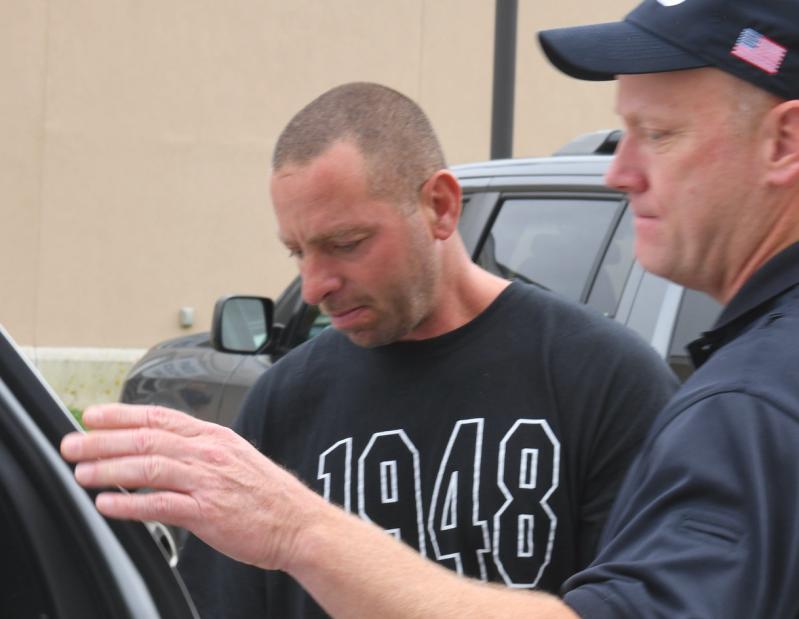 Joseph Grippo being led out of East Hampton Town Justice Court after an arraignment in June 2019.
Doug Kuntz
By Christine Sampson

Monday was another dramatic day in court for Joseph Grippo of Montauk, who is facing a second-degree murder charge following the death of a former friend.

He reportedly cursed multiple times at Suffolk County Criminal Court Justice Stephen L. Braslow, who, after holding him in contempt, ordered him out of the courtroom and back to the county jail.

Mr. Grippo, 49, is accused of beating and stabbing Robert Casado with a pickax on June 6, 2019, after a fight over a woman. He was arrested two weeks later and has been in jail in Yaphank ever since.

A plea deal had been in the works, but is now off the table, and the case is expected to go to trial. The Suffolk County District Attorney’s office said after Mr. Grippo’s brief appearance in court that Justice Braslow will hold a pre-trial control hearing on May 12.

Mr. Casado, 38, was found lying on the ground, bleeding profusely, by passers-by in Kirk Park, and died at Stony Brook University Hospital. Death was attributed to blunt-force trauma and stab wounds to the face and neck.

Mr. Grippo is represented by Dan Russo, who in February 2020 protested to Justice Braslow that the D.A.’s office had not turned over all the evidence in the case, despite certifying that it had done so. Mr. Russo said that what he received lacked scientific reports detailing crime scene analyses, and that a disc containing those files was inaccessible. There was “nothing that connects my client to this case,” the attorney said at the time.

Whereas being held in contempt can legally result in a new charge, that did not happen Monday in the case of Mr. Grippo, who is charged with second-degree murder. According to the D.A.’s office, he has a prior criminal record, including a1998 conviction for armed robbery, for which he served 15 years in prison.

The East Hampton Press reported this week that Mr. Grippo has been refusing to speak with his attorney and may be barred from his own trial because of his courtroom conduct.

Mr. Russo did not respond to The Star’s requests for comment by press time this week.

Meanwhile, a new prosecutor, Eric Aboulafia, an assistant district attorney, has been assigned to the case. Mr. Aboulafia was also a prosecutor on another prominent East End case, that of Patchita Tennant, a manager at the time of the East Hampton Village CVS, who was accused in 2019 of shooting her boyfriend. Ms. Tennant was ultimately cleared of the attempted murder charge.

Mashashimuet Park's History and Future
A Conference for Young People to Create Solutions
Get Outside, Get Moving
END_OF_DOCUMENT_TOKEN_TO_BE_REPLACED