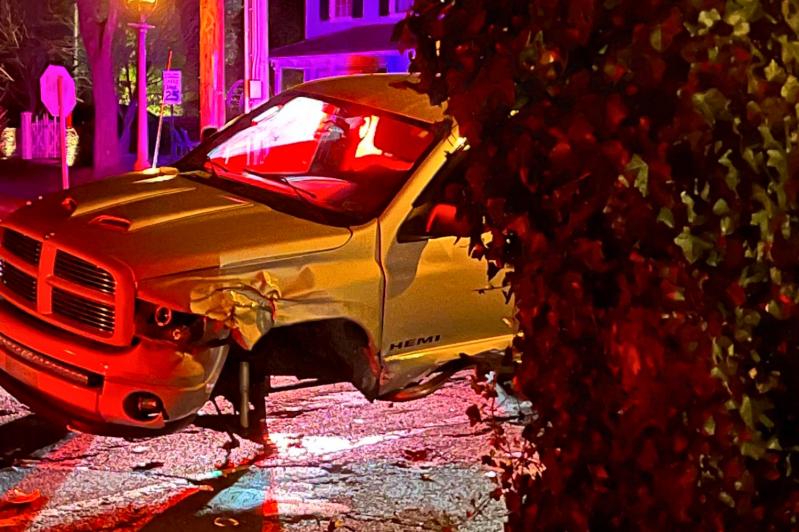 Maynor Lainez Castro told police he lost control of his truck, but he was said to have performed poorly on field sobriety tests after striking a tree in Sag Harbor on Sunday.
Peter Acocella
By Christopher Gangemi

A loud crash shortly after midnight on Sunday alerted a Sag Harbor Village police officer on routine traffic patrol at Hampton Street that something was awry.

Just down the road, the officer found a 2004 Dodge Ram pickup truck, totaled, and facing north in the oncoming lane of traffic near the intersection with High Street.

The driver, Maynor Lainez Castro of Bridgehampton, 25, told the officer that while driving toward Sag Harbor he’d lost control of the truck and crossed the

­­double yellow lines, striking a tree on the south side of the road.

Police reported that Mr. Castro failed field sobriety tests and refused multiple times to take a breath test. “No, I don’t want to do anything,” he was quoted as saying.

Charged with misdemeanor drunken driving, he was held overnight at East Hampton Town police headquarters in Wainscott, for a morning arraignment in Town Justice Court before Justice Steven Tekulsky. He is to appear in Sag Harbor Village court on Friday, April 22, in answer to the charges.

Mashashimuet Park's History and Future
A Conference for Young People to Create Solutions
Get Outside, Get Moving
END_OF_DOCUMENT_TOKEN_TO_BE_REPLACED