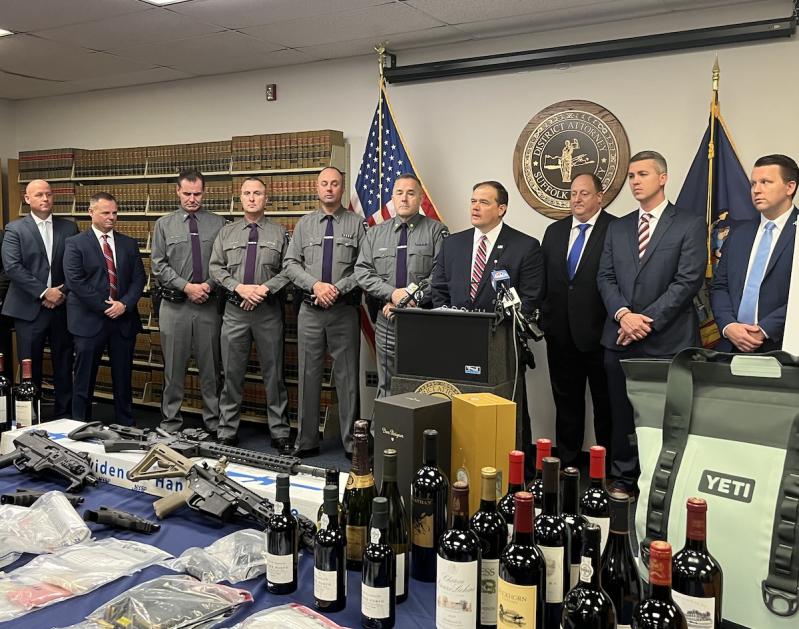 Greed was the motive, Suffolk County District Attorney Ray Tierney said Tuesday, behind two September burglaries in which a pair of thieves allegedly targeted a wealthy woman with residences in Sag Harbor and Manhattan and made off with cash, art, guns, jewelry, fine wines, and other items valued at more than $1 million.

Raymond Bouderau of Manhattan, 49, and Jacqueline Jewett of Connecticut, 57, are charged with first-degree grand larceny and second-degree burglary, both felonies, for what Mr. Tierney described as "meticulously planned heists" that he likened to "a bad movie script." Mr. Bouderau, who identified himself as a filmmaker and actor, is also charged with conspiracy in the fifth degree, a misdemeanor. They were arraigned Friday in East Hampton Town Justice Court; Justice Steven Tekulsky ordered Mr. Bouderau held without bail and imposed bail of $200,000 cash, $400,000 bond, or $650,000 partially secured bond for Ms. Jewett.

"If there's one thing that this case illustrates, it's that life is not like the movies," the D.A. said. "In Suffolk County, if you steal other people's property, whether it's at the point of a gun or, in this case, through the planning of an elaborate heist, the S.C.D.A.'s office, along with our law enforcement partners, will hunt you down and you will be held responsible."

Speaking behind a table with piles and piles of evidence — at least 40 bottles of fine wine, an AR-15 rifle and ammunition, expensive Yeti coolers, and jewelry belonging to the victim, plus a large quantity of drugs found in Mr. Bouderau's Manhattan apartment — Mr. Tierney laid out the sequence of events that led to the arrests.

Mr. Bouderau and Ms. Jewett, who were reported to be in an on-and-off-again romantic relationship, are said to have obtained the victim's addresses, travel dates, and other personal details through another man, Ms. Jewett's ex-paramour, who was dating the victim at the time. That third person is not facing charges, Mr. Tierney said, after an investigation revealed that he was an "unwitting" party to the crime: His iCloud account had been hacked as part of the criminal conspiracy.

The victim was last in her Sag Harbor residence — Mr. Tierney declined to specify the neighborhood within the two-square-mile village where she lives — on Sept. 22, before going on vacation. Both alleged burglaries took place on Sept. 25, first in Manhattan and then in Sag Harbor. The investigation commenced on Sept. 27 when the woman returned to her Sag Harbor house and called the police. Village and state police responded to the house, where a basement window showed signs of forced entry.

"The house had been ransacked, and multiple safes were compromised," Mr. Tierney said. "Obviously, the electricity was shut off to disable whatever surveillance cameras there might have been."

Authorities tapped footage from other cameras in the areas, iCloud data, and license plate-reader data. "It was determined that a pickup truck registered to Bouderau had been in both Sag Harbor and Manhattan during the time frame of the burglaries," Mr. Tierney said.

Search warrants were obtained. Among the investigators' findings on Mr. Bouderau's phone was a text-message conversation with Ms. Jewett in which they discussed the victim's addresses and vacation plans.

Additionally, Mr. Tierney said, "Pictures of artwork and some stolen materials were found on Bouderau's phone, and it is believed he was looking at various pieces of artwork to try to determine their worth." Many of those photos matched the victim's own images of her valuables. Also found on the phone was a photo of the front door of the victim's Manhattan residence.

When Mr. Bouderau's Manhattan apartment was searched on Nov. 30, Mr. Tierney said, investigators recovered many of the victim's belongings and more than 750 grams of a drug that field-tested positive as ketamine, along with cocaine and other illegal drugs. Investigators also reportedly found an AR-15 rifle that lacked a serial number — a type of illegal weapon commonly called a "ghost gun" — and three handguns. Mr. Bouderau does not have a license to carry these weapons, so it is also considered illegal possession.

Additional charges against Mr. Bouderau unrelated to these two burglaries are likely to come to light in the near future, Mr. Tierney said.

Investigators also questioned Ms. Jewett on Nov. 30. She admitted her role in the burglaries, according to the district attorney.

"We all worked together tirelessly to successfully build this case," Mr. Tierney said of the team of investigators. "This is a great example of inter-agency cooperation, and the residents of Suffolk County are all safer because of our willingness and our ability to work together."

In a release issued after the press conference Tuesday, Sag Harbor Village Police Chief Austin J. McGuire said, "Thanks to the coordination between our partners in the New York State Police and the Suffolk County District Attorney's Office, we were able to quickly solve this case. I am so proud of everyone who worked tirelessly to identify the perpetrators and bring them to justice."