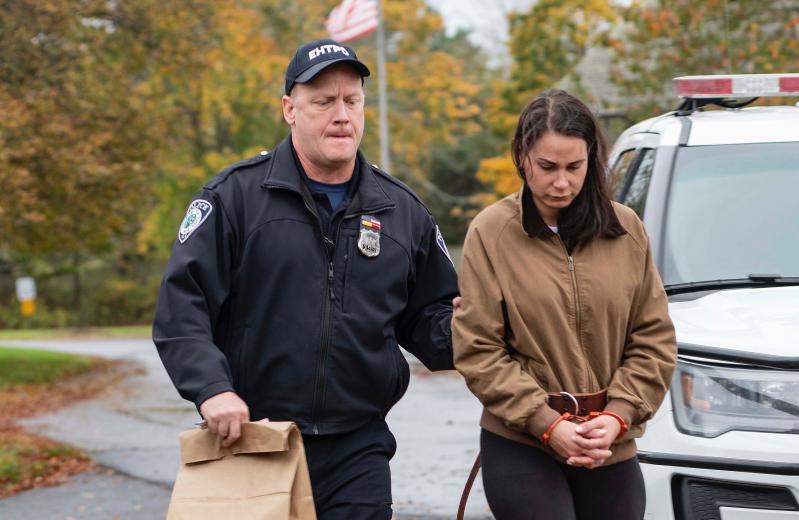 Lisa Rooney, seen here in the fall of 2019, has been sentenced to three to nine years in prison.
Doug Kuntz
By Christine Sampson

Tears filled the courtroom on Thursday morning at the sentencing of Lisa Rooney of Montauk, who had a blood-alcohol level twice the legal limit and traces of cocaine in her blood when she struck and killed John James Usma-Quintero, who was riding his bicycle home from work in that hamlet, on Oct. 30, 2019. Mr. Usma-Quintero's mother was crying; Ms. Rooney's loved ones were crying, and she herself was crying as Justice Richard Ambro of Suffolk County Supreme Court sentenced her to three to nine years in state prison.

In March, Ms. Rooney, now 32, pleaded guilty to aggravated vehicular homicide and second-degree manslaughter, both felonies, as well as aggravated driving while intoxicated and seventh-degree criminal possession of a controlled substance, both misdemeanors. She could have faced as much as 25 years in jail.

"I'm sentencing you for your actions on Oct. 30, 2019 -- for your dangerous and reckless actions that day," Justice Ambro said Thursday. "I've taken into account your genuine remorse. . . . I think that sentence is fair under all the circumstances."

Before that, in a final effort to have Ms. Rooney's sentence reduced, her attorney, Marc Gann, portrayed her as a victim of domestic violence who had addiction issues that stemmed from post-traumatic stress disorder. New York State's Domestic Violence Survivors Justice Act, Mr. Gann argued, would give the court the power to impose a shorter sentence. He presented Justice Ambro with two forensic reports from doctors, documenting her history of "self-medication through substance abuse" and claiming that domestic violence was "obviously a major contributing factor" in the crash that killed Mr. Usma-Quintero. The judge accepted the reports as exhibits, but immediately sealed them.

Assistant District Attorney James Curtin, who prosecuted the case with his colleague David Geller, then began dismantling Mr. Gann's assertion that the proposed sentence was "unduly harsh." The law, Mr. Curtin said, requires a defendant who commits a crime to be a victim of abuse by a member of the family or household at the time of the offense. That was "simply not the case," Mr. Curtin said, because Ms. Rooney and the abusive boyfriend she lived with, known only as "Hank," had split up well before the accident that claimed Mr. Usma-Quintero's life.

"By her own admission," Mr. Curtin continued, "she had started with alcohol and drugs prior to that relationship." He said her pattern of substance abuse started when she was a student at Binghamton University.

On the night of the fatal accident, just after sunset, Ms. Rooney left a bar and was driving home in her Chevrolet pickup truck on Flamingo Road in Montauk when she swerved, struck Mr. Usma-Quintero, and drove about 30 more yards before hitting a guardrail and stopping. Mr. Usman-Quintero, 28, had been on his way home after his shift at the Montauk 7-Eleven, where he had been working for about four months. He sent most of his pay home to Colombia to support his mother and his children. He was pronounced dead at Stony Brook University Hospital.

An investigation revealed that Ms. Rooney had been driving at 85 miles per hour in an area with a speed limit of 40, and that she had multiple plastic bags of cocaine on the floor of the truck and on the ground outside of it. She failed roadside sobriety tests and refused a blood test, but a warrant was obtained to force a test, and more than three hours after the crash it was determined that she had approximately twice the legal limit of alcohol in her blood, along with traces of cocaine.

Over the past two years, Ms. Rooney appeared before four judges. On Halloween of 2019, East Hampton Town Justice Lisa R. Rana was the first, imposing bail of $1,000 and mandating she enter a drug and alcohol rehabilitation program.

Two months later, a grand jury returned an 11-count indictment and the case landed in the hands of Justice Fernando Camacho in Central Islip. Justice Camacho, however, soon recused himself, saying he was uncomfortable taking the case because he knew Ms. Rooney's mother, Acting Justice Bruna L. DiBiase of the New York State Supreme Court's criminal division in Queens.

After that, the case went to Acting State Supreme Court Justice Mark Cohen, but proceedings were put on hold during the pandemic, and Justice Cohen retired at the end of 2020. It concluded with Justice Ambro in Riverside this week.

Now that many Covid-19 travel restrictions have been relaxed, Mr. Usma-Quintero's older brother, John Fredy Usma-Quintero, and his mother, Miryam Quintero-Duque, who are from Colombia, were able to be present in the courtroom, making Thursday's sentencing the first time Ms. Rooney had to face the victim's family in the nearly two years since the crash.

John Fredy Usma-Quintero spoke through a Spanish-language interpreter. It was not one person who has died, he said, but rather two, because their mother has been distraught with grief and agony since her younger son died. "In life, every action has a repercussion," John Fredy Usma-Quintero said. "Unfortunately, there are some consequences that you cannot fix."

"Our Holy Father," he continued, will not bring his brother back. "An apology doesn't do that, either."

Ms. Rooney later read a lengthy letter of apology. No one interpreted her words into Spanish.

"It should have been me that night" and not Mr. Usma-Quintero, she said. "I will always live with this guilt and shame."

"My addiction took over my life," she later continued. "Today I am not that person. . . . Today I am sober, and deeply, deeply remorseful."

In addition to imposing Ms. Rooney's prison sentence, Justice Ambro revoked her driver's license and mandated interlock devices on any vehicles she might drive in the future.

Justice Ambro said that as he was reviewing Ms. Rooney's history of substance abuse ahead of the sentencing, "You get the feeling, as you read it, that 'this isn't going to end well.' . . . It didn't."