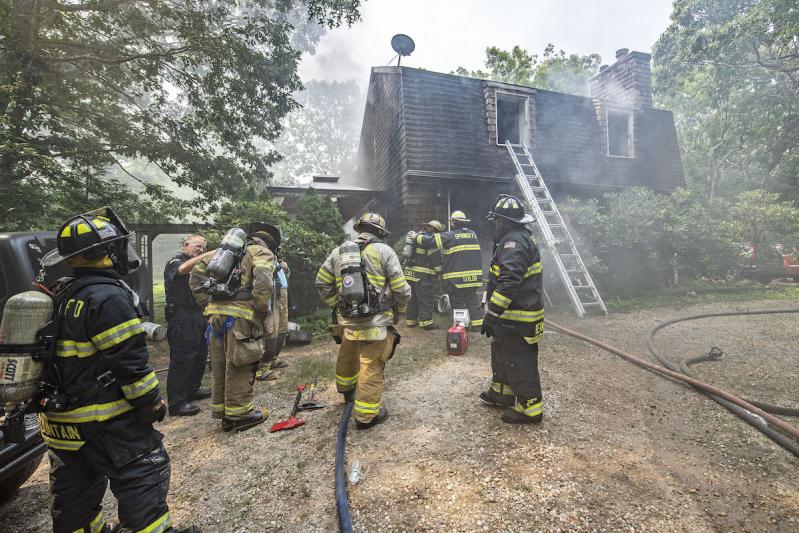 A fire was reported at around 9:15 a.m. Tuesday on Springs-Fireplace Road in the vicinity of Copeces Lane and Harrison Avenue.
Michael Heller photos
By Bella Lewis

The East Hampton Town fire marshal's office is investigating the cause of a fire on Tuesday morning that "totaled" a Springs house, said Springs Fire Department Chief Tim Taylor.

The Springs Fire Department was alerted to the fire on Springs-Fireplace Road between Harrison Avenue and Copeces Lane shortly after 9 and responded with two engines, a tanker, and ambulances. They soon requested mutual aid from Amagansett, in the form of a tanker, and East Hampton, in the form of an engine and tanker.

After mutual aid was dispatched to the scene around 9:30, 15 minutes later, Springs requested help from Sag Harbor's rapid intervention team. The RIT team is there to pull a firefighter out of the house if he or she is in trouble, said Chief Tim Taylor. There were no injuries.

"This seems to be electric-driven, and we're not making any progress until we lose power," a chief reported on the radio at the time. The department next requested help from PSEG and a possible police escort to get the utility responders through heavy morning traffic.

Chief Taylor said the family was safely together on the front lawn and had gotten out of different parts of the house in time before fire department arrival. As no lives were in danger, the four fire departments who responded to the scene had to wait until PSEG arrived to cut the electric. Only then, could they aggressively battle the fire.

"When we show up, one of the first things we normally do is pull the meter off the house, which kills the power throughout the house. Unfortunately when we got on scene the electric meter itself was actually on fire and we couldn't get to it," the chief explained.

He said the responders mitigated the danger as best they could until PSEG cut the main power line. "You can't squirt water on electricity obviously, so you have to weigh up your risk/reward. If there were people inside, we would have made the attack and gone in."

At about 10:15 a.m. the Montauk Fire Department was asked to stand by at the Springs Firehouse. PSEG arrived on the scene about 15 minutes later.

Battling the fire went smoothly after the power was cut, said the fire chief, and at about 10:45, firefighters reported the house's second story "cleared."

"It started in the basement," Chief Taylor said. The main problem was apparently the home's "balloon" construction, which means it allowed the fire to spread easily and get into the roof rafters.

An estimated 30 firefighters were on scene, and the day was very hot. "We went through manpower pretty quick," the chief said. Especially in the heat, the 15 or so firefighters in the house at a time had limited air supply. An "evolution" is what the department calls the 15-to-20-minute shift a firefighter is able to spend in the fire before getting checked out by the ambulance and released again.
Hydration is key, Chief Taylor said, and the Ladies Auxiliary proved an important part of the fire department once again. They were called off from their day jobs to bring the responders water and food.

A GoFundMe campaign has been started to help the family who lived at the house. 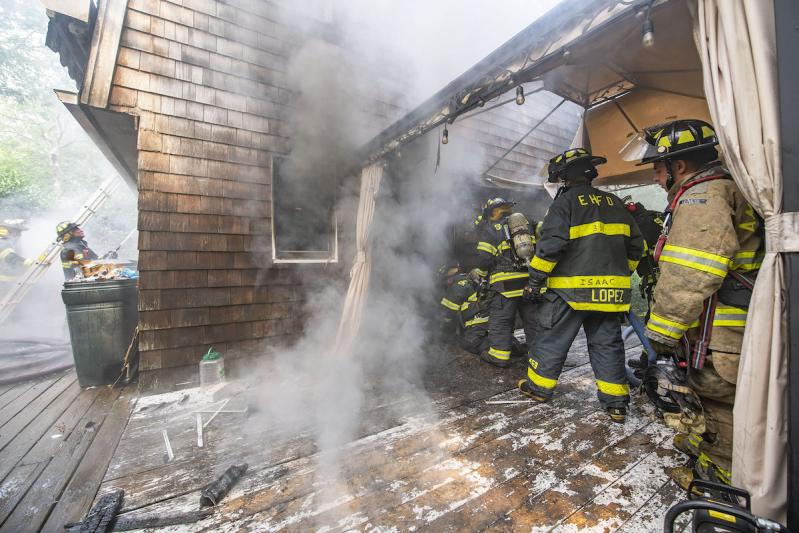