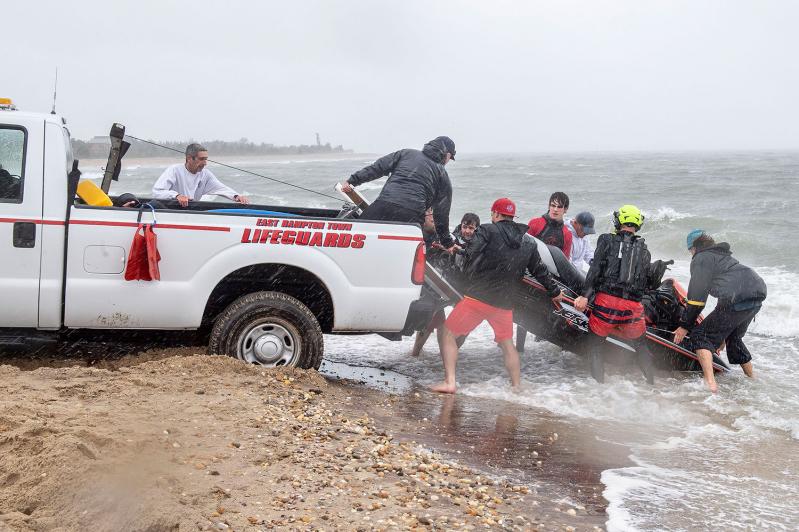 Two saves on the water over the holiday weekend were efficient and without major injury, a good warm-up for chaotic summer months likely to come. The first, headed up by Jim Arnold, chief of East Hampton Volunteer Ocean Rescue, was in response to a dispatch call at 11:04 a.m. on Saturday regarding a possible swimmer in distress on Gerard Drive in Springs. It turned out that a kiteboarder needed help.

Mr. Arnold said that E.H.V.O.R. members happened to be in the area with their vehicles, so the response time of about 20 members took around seven minutes. They were joined by members of the Coast Guard, Marine Patrol, and town lifeguards.

"We were led to the inlet and went on the beach and started to sight for the distressed kiteboarder," explained Mr. Arnold. He said the kiteboarder was all tangled up in his equipment, "dragging him in the water. He was out of control, so we deployed the jets and went out to get him with a rescue swimmer on the back of the ski."

The rescued kiteboarder, who is in his late 20s, was "a little beat up" with a complaint of chest pain, reported the Ocean Rescue chief, who was appointed in January after serving as assistant chief for six years. After initially declining medical attention, the young man was taken to Stony Brook Southampton Hospital by East Hampton Village ambulance.

There was a second kiteboarder, who made it back to shore on his own, "but really struggled," noted Mr. Arnold, who understands that "people who love surfing in hurricanes go out for the wilder times, as that's when it's the most exhilarating. You don't want to say, 'Don't go,' but you really need to say that."

The imperative is to always go with a partner, he said, and to always call 911 if there is any issue.

The second save was on Memorial Day in the waters off of Sag Harbor. Ten boaters in distress were rescued without injury around 5 p.m., when Harbormaster Christian Duryea was on patrol and heard a distress call on the radio.

The official report stated two inflatable boats, each with five people on board, were caught in two to three-foot waves in significant winds, taking on water in the area of Noyac Bay, between Jessups Neck and Cedar Beach, Southold.

Mr. Duryea responded and located the two inflatables, where no one on board was wearing a life jacket. He got them all safely into the harbormaster's vessel and transported them to a Southold dock.