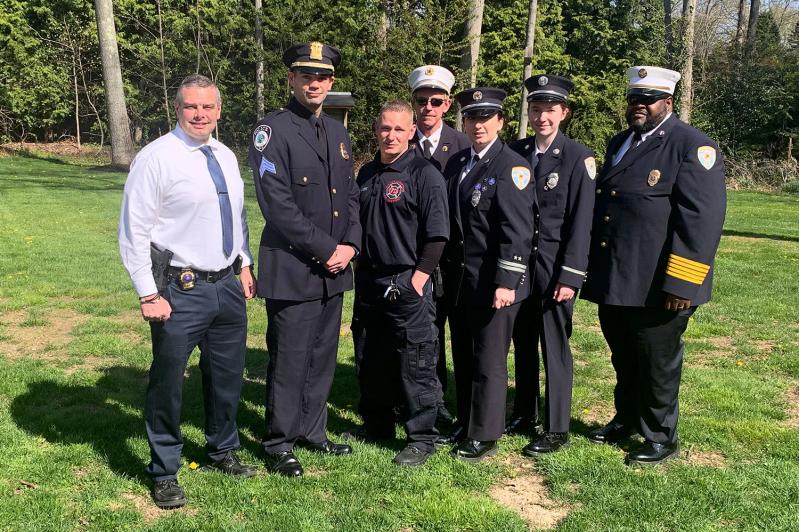 When a woman was dropped off unresponsive in the foyer of East Hampton Town police headquarters in Wainscott in February of last year, "that was my first experience of something like that," said Detective Michael Coleman, one of the officers who rushed to the front of the building.

Detective Sgt. Daniel Toia, who leads the department's in-house CPR training, was in step, immediately performing CPR on the woman, who had no pulse and was not breathing at the time.

Detective Arthur Scalzo and Sgt. Kenneth Alversa ran from the back offices, too, grabbing an automated external defibrillator from the wall. "It was one of those moments where all the training you have kicks in and everyone involved is on quick alert," Detective Coleman said.

An ambulance was called, but at the time village ambulances were already dealing with a three-vehicle crash on Main Street.

"It's really nice to know that we can count on our neighbors. That's the biggest takeaway for us," said Lisa Charde, chief of the East Hampton Village Ambulance Association, who called for mutual aid from the Bridgehampton Fire Department and sent a few off-duty village members over for good measure.

Bridgehampton's chief, Nicholas Hemby, drove the mutual aid ambulance to the cardiac emergency. He said that after the victim had been shocked three times with the defibrillator, the E.M.T.s were able to maintain her pulse and transport her to Stony Brook Southampton Hospital.

Chief Hemby reported that nine days later she was discharged with "no neurological defects."

On April 24, these first responders were honored at the Suffolk County CPR Life-Saving Awards for this against-the-odds save.

It turns out family members had taken the woman to police headquarters after she had apparently become unconscious at their home nearby. The husband and son left as soon as they dropped her off, however.

"Every time you save someone, it's just a wonderful day," Chief Hemby said, noting the importance of "early CPR and good CPR."

Detective Toia described the group effort as "outstanding," and an example of just how ready the Police Department is to serve its community.

Twenty departments were honored during the award ceremony, which was held in person and socially distanced, making the most of a beautiful day at Dix Hills, Detective Coleman said.