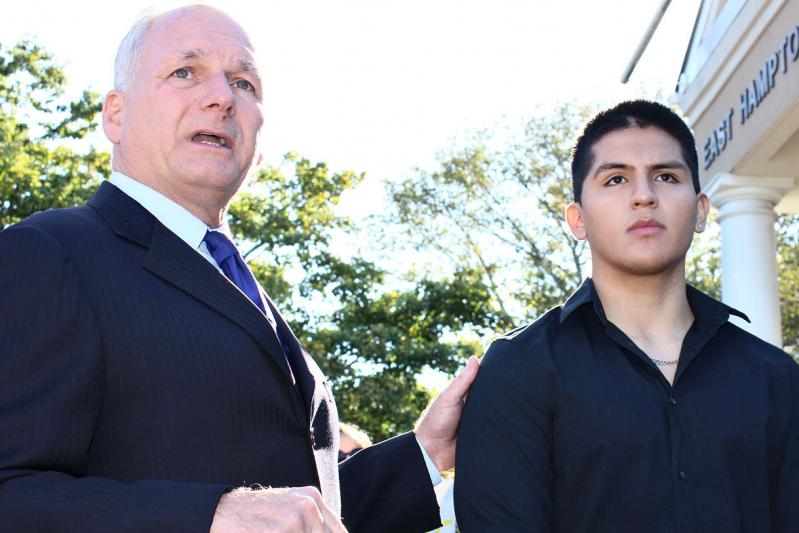 A New York County Supreme Court judge has denied Charles Streep's motion to dismiss a civil case brought against him by David Peralta following an August altercation between the two men in East Hampton that left the teenage Mr. Peralta with what his attorney describes as life-altering brain injuries. The judge, Barbara Jaffe, granted Mr. Streep's motion to dismiss charges of negligence, and stayed the civil case while the criminal one in Riverhead is underway.

"Each matter concerns the same incident, and a conviction in the criminal case would likely estop defendant from denying certain facts, thereby simplifying the issues," Judge Jaffe wrote in her ruling, providing reason for putting the case on hold. She noted that any delay in criminal proceedings, however, gives Mr. Peralta "the right to move to vacate the stay."

As for the incident in late August, witnesses say it followed an argument over a near collision when Mr. Streep, a nephew of the actress Meryl Streep, ran a stop sign in a bank parking lot. The older man, reportedly using a racial epithet, allegedly choked Mr. Peralta, then 18, until he was unconscious, and then slammed him into the pavement.

Mr. Peralta's claims for intentional assault, battery, and punitive damages still stand, while those "for negligence and gross negligence are severed and dismissed," Judge Jaffe ruled.

"To be held liable for negligence, the defendant must have breached a duty of care owed to the plaintiff. Negligence claims, in contrast to those for assault and battery, lack the element of intent, and thus, allegations of intentional conduct preclude a claim of negligence, as the two states of mind cannot coexist," the judge wrote.

"The practical effect of the dismissal of the negligence claims will be the refusal of Streep's insurance company to pay for any of David's losses. Therefore Streep will pay David from his own, or his families' pockets. I'm puzzled as to why his attorneys would even seek that result. But I'm not displeased that Streep will personally be responsible for the damage he's caused," said Edmond Chakmakian, Mr. Peralta's attorney.

Mr. Peralta, who required emergency brain surgery following the incident and was not able to resume his studies at John Jay College of Criminal Justice this year, has about $100,000 worth of medical bills, $41,505 of which have been met by a GoFundMe page set up to help him.

Additionally, Judge Jaffe refused to have the case transferred from New York County to Suffolk County. Mr. Chakmakian had opposed this motion from Mr. Streep because his three witnesses, as well as Mr. Streep himself, live in Manhattan.

Andrew Weinstein, Mr. Steep's attorney in the criminal case, and his civil attorney, Randy Mastro, who is Rudy Giuliani's personal attorney and a former New York City deputy mayor of operations, had no comment. Mr. Streep is due in court again on April 29.

Petition to Speed Up Sand Replenishment in Montauk
Artistic Portraits of M.L.K. Up for Auction on Saturday
Wine Tasting for Lions Club
END_OF_DOCUMENT_TOKEN_TO_BE_REPLACED