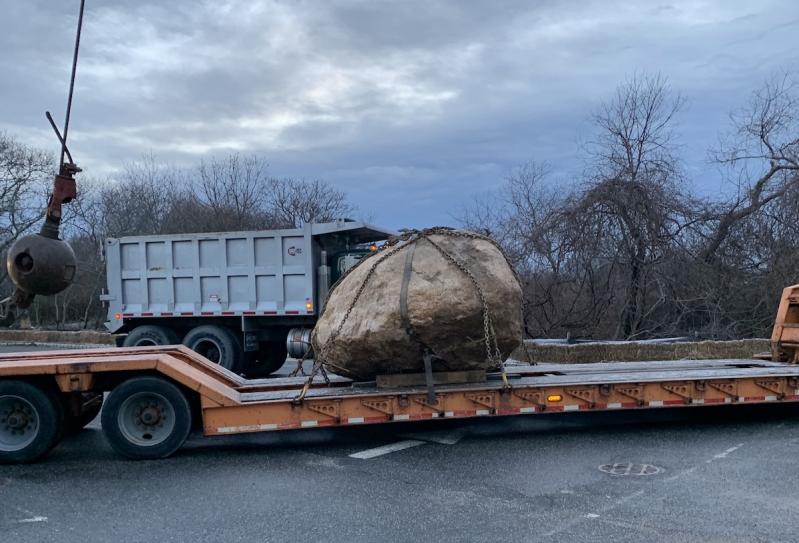 An incident last Thursday between a contractor and a subcontractor working on Montauk Library renovations began with the removal of a large boulder early that morning.
By Bella Lewis

The Montauk Library, which is currently undergoing a $4 million renovation of its facilities, was the scene last Thursday morning of an ongoing dispute between the general contractor, a Bohemia construction company called the Patriot Organization, and two local subcontractors.

According to East Hampton Town police, the incident began with the local men, Keith and David Grimes, "staging an excavator and crane within the parking lot" and removing a massive boulder. Earlier that morning, police were told by Jonathan Singer, the general contractor, that Keith Grimes Inc. had been fired from the job the day before for "frivolous change orders." Mr. Singer said he had not been on board with all the changes but that the company had paid "a few $100,000 change orders" just "to make it go away."

Mr. Singer told police that on one recent occasion Mr. Grimes "determined on his own that the soil wasn't right, and he didn't notify the engineer. He just brought in tons of sand and was trying to muscle the library into paying."

On Wednesday night and all day Thursday, when Mr. Grimes went back on the property to retrieve his equipment, Mr. Singer maintained that he was trespassing and "vandalizing" the site. Police, however, disagreed, stating that the subcontractor had acted under police supervision and "within the terms of mediation." Detective Sgt. Daniel Toia said that at no time was there a violation of law, and that the dispute belonged in civil court. "Each time in our attempt to mediate, we determined it was a civil matter between money owed and work done," he said.

Nevertheless, at the end of the day, Mr. Singer said his company had been set back at least $100,000, and a month to two months' worth of work, because of Mr. Grimes "ripping the library apart" and attempting to take with him the massive rock, valued at $8,000. The contractor said his former employee had spent the day unnecessarily accompanied by 14 employees, a few trucks, and a Komatsu 160 excavator.

The redacted police report corroborated only that "Public Library Board of Directors expressed interest in keeping the boulder. Glaser [another Patriot Organization principal] states that Keith and David Grimes intended to take the boulder from the site along with other materials."

Denise Dipaolo, the library director, wrote in an email that "the root cause of the incidents at the library is a contractual dispute involving a subcontractor, who is not directly retained by the library. The library is hopeful this situation will be resolved quickly."

A Reminder From PSEG About Digging
Petition to Speed Up Sand Replenishment in Montauk
Artistic Portraits of M.L.K. Up for Auction on Saturday
END_OF_DOCUMENT_TOKEN_TO_BE_REPLACED