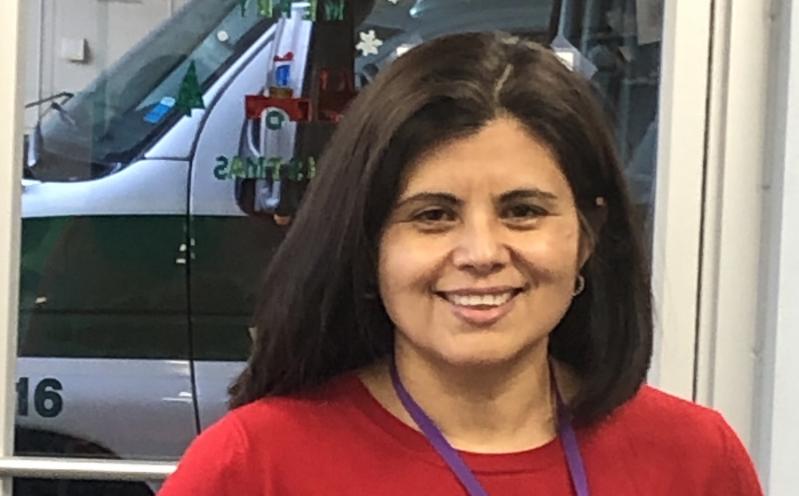 Marcia Dias was the East Hampton Village Ambulance Association’s 2020 Member of the Year for 2020.
By Bella Lewis

The East Hampton Village Ambulance Association, in a virtual presentation last week, honored a number of its members who not only coped with Covid but went beyond.

Alex Verdugo, who started as a fire department driver and joined the association officially over the summer, was among those recognized for surpassing 300 calls in 2020.

"I know my capabilities," said Mr. Verdugo, who owns Climbers Tree Care Specialist Inc. "There are a lot of elder people who need our help. They need a stronger person to put them in a stretcher." When the call requires muscle, he said, "I'm the first one to sign in."

The award for Member of the Year went to Marcia Dias, who racked up 150 calls last year and is the squad's newest captain. She works as a secretary at East Hampton High School five days a week, takes the 8 p.m. to 6 a.m. ambulance shift twice a week, and stays available in the day on Saturdays and Sundays. She recalled one of her hardest calls as a driver: "I remember this poor girl in her early 20s, and she's trying to cough all the way from East Hampton to Southampton. This is what people don't see."

To "de-con," meaning to keep their families safe, Ms. Dias and Mr. Verdugo both follow an at-the-front-door strip policy. " 'I know what kind of call you ran!' " Ms. Dias says her husband will exclaim. Mr. Verdugo said he goes straight into a hot tub.

Teri Bertha, Kathy Weiss, and Paul D'Andrea all hit the 500-call milestone as volunteers. Lisa Charde, who is beginning her third year as chief of the association, made over 150 calls in 2020 this past year and has a total of 5,000 calls in her 22 years as a volunteer.

Tom Bock, whose official affiliation remains with the East Hampton Fire Department, said he "helps out" driving for the ambulance association — that is, if 300 calls in one year is the new standard for helping out. "For me, 'thank you' goes a long way," said the estate business manager. "That's why I keep doing it. The pager goes off because someone needs help. As long as they keep the fire department drivers, I'll be there — till the day I die, I guess!"

The job would be easier, said Mr. Bock and others, if drivers know to pull over when they see a green or blue light flashing in a car behind them, indicating that a volunteer is responding to an emergency. "We could be on our way to their [own] house," said Mr. Bock. "Minutes save lives and property."

In the couple of years since Mr. D'Andrea retired from his work as a land steward and preserves manager for the Nature Conservancy, he has been named Member of the Year for his driving and E.M.T. support, as well as for his 300 calls in 2020. At the age of 64, he does not go out on Covid calls, and remains apart from the patient if he must drive.

Ms. Dunlop, who was also honored for 300 calls in her 31st year of volunteer service, is 72 and similarly careful. "It took a three-week hiatus to pull myself together and get all the facts," she said, before returning to her volunteer service with a handle on protocol to stay safe. She does part-time library work as well.

Randy Hoffman was presented with the Chief's Award this year. "He has overcome a devastating surgical complication and continues to work his way back onto the ambulance. An inspiration to the entire community," Chief Charde said. A routine surgery for a pinched nerve went wrong, and Mr. Hoffman went through 30 hours of five surgeries only to find himself completely paralyzed. A cabinet maker by trade, he said he can now mess around in his workshop after eight months of rehabilitation, but he is not sure when he will be able to walk without crutches.

"Being a very cynical person, one thing I never would have said earlier — and it's the main thing I've learned — is that most people default to being fairly generous and good," Mr. Hoffman said. "I would never have believed that before this happened. The outpouring of affection has been pretty unbelievable."

He was not expecting the award. "It definitely made me weep when she announced it."

Ms. Dias, too, was "very surprised" by her award. Mr. D'Andrea was not even sure that he'd run 300 calls, but Ms. Charde confirmed it. Mr. Verdugo commented that "if we were all scared" and "if people don't take the risks" the community would be worse off.