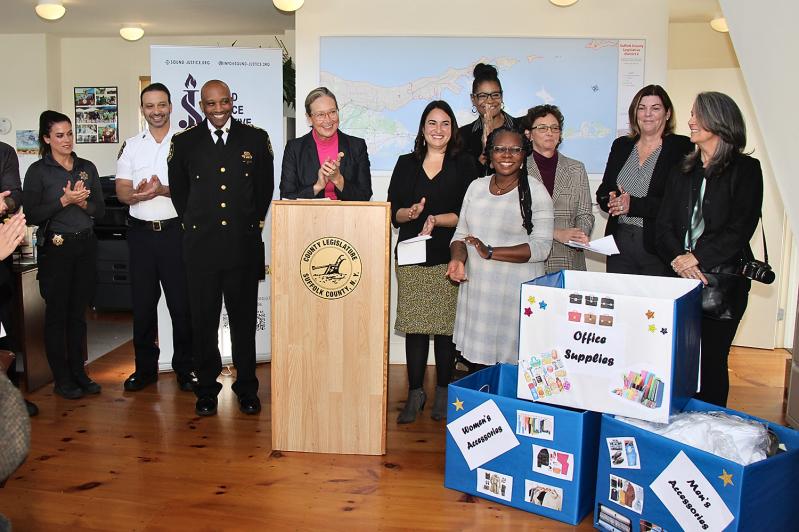 Suffolk County Legislator Bridget Fleming, at the podium, was joined at her Sag Harbor office on Nov. 10 by Sheriff Errol Toulon, at left, and representatives of the Sheriff’s Transition and Re-Entry Team, New Hour LI, and the Sound Justice Initiative to launch a clothing drive last week to help people transitioning to life after incarceration.
Durell Godfrey
By Christopher Gangemi

On the South Fork, many people are largely shielded from the issues and stresses faced by those who have been incarcerated or involved with the justice system. The challenges of stepping out of jail for the first time in months or years, picking the pieces back up, and attempting to become a thriving member of society can be overwhelming.

That is part of the reason Suffolk County Legislator Bridget Fleming teamed with Suffolk County Sheriff Errol Toulon and his Sheriff’s Transition and Re-entry Team, or START, New Hour LI, and the Sound Justice Initiative to launch a clothing drive last week to help those transitioning back to life outside after incarceration.

Irene Donahue, chief of staff for Legislator Fleming, put it succinctly: “The START program is a matter of supporting a person to get back on their feet and then giving them shoes once they’re on their feet.”

START opened its doors in February of 2020. “Since then,” according to Kristin MacKay, director of public relations for Sheriff Toulon, “394 clients have received case management services.”

The goal of those services, which start even when someone is still incarcerated, is to help guide them back to society. The START program identifies people and their needs while imprisoned and connects with them after they have finished serving their sentences to continue supporting them. The ultimate goal is to prevent recidivism, or the tendency of a convicted criminal to reoffend.

It’s a challenging goal. According to the National Institute of Justice, 77 percent of released prisoners are arrested for a new crime within five years.

However, for the 394 clients served by START since its inception, the recidivism rate has been only 12 percent. “The program is doing well,” Ms. MacKay said.

Importantly, it is free. It relies on existing community organizations, in this case the Sound Justice Initiative, which delivers educational programs and workshops, and New Hour which focuses on issues specific to post-incarcerated women and children.

It also relies on donations. That’s why when you enter Ms. Fleming’s office at 75 Washington Street in Sag Harbor, three large decorated boxes are stacked on the wall. The partners hope to fill them with new or cleaned professional attire for men and women, as well as hygiene products and office supplies.

Legislator Fleming noted in a press release, “This clothing drive will help so many individuals who are finishing their sentences find local good paying jobs that can help rebuild their lives . . . reducing recidivism and saving taxpayer dollars.”

According to her office, New York spends $69,000 per incarcerated individual. For Suffolk County specifically, that number rises to well over $100,000 per individual, according to the Vera Institute of Justice.

The START program boxes at Ms. Fleming’s office could also serve as a reminder that rehabilitating justice-involved individuals is a societal responsibility that benefits not just the post-incarcerated, but the communities they’re looking to re-engage with.

Her office will be collecting donations through the end of the year.