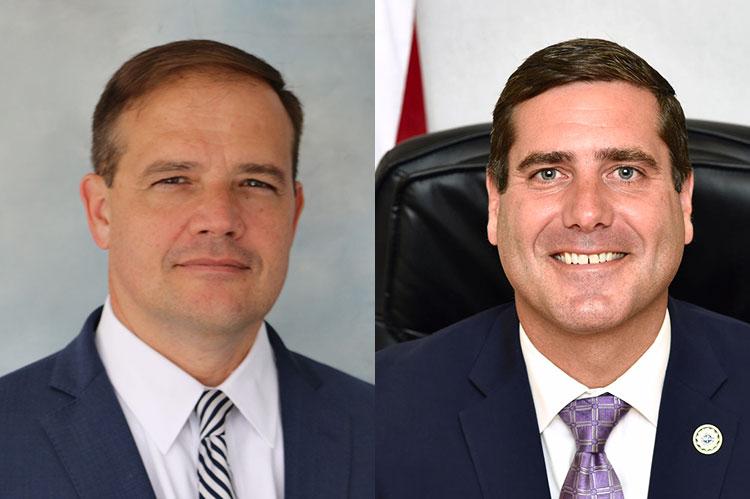 The race for the office of Suffolk district attorney pits the incumbent, Tim Sini, against Ray Tierney, a veteran prosecutor who is making his first run for elected office.

Mr. Sini, relying on his track record for a second term, says he has been tough on gangs, drug dealers, human traffickers, and environmental offenders, and that he has brought crime in the county down “to the lowest level in recorded history.”

Mr. Tierney disagrees. “We are being lied to about the true crime statistics in Suffolk County,” he claims. “He wants to hide those statistics from the public, and that protects politicians and criminals.”

The challenger, who is not a member of a political party but is running on the Republican ticket, has spent most of his career as a courtroom prosecutor. Over the last decade, he said, he has “probably participated in most of the most significant cases on Long Island — MS-13, Colombian cartel cases, corrupt politicians from all three major parties. The list goes on and on.” He is a former executive assistant district attorney in Brooklyn, where he prosecuted crime during the onset of bail reform, Covid, and racially charged unrest in the wake of George Floyd’s murder.

One of Mr. Tierney’s platforms is opposition to the state bail-reform policies established late in 2019, which, he said, have released dangerous criminals back into the public realm. He would like to implement “shot-spotter” technology to help law enforcement respond to gun-related crime. He also wants to train and inspire the next generation of prosecutors. “I have a passion for this. I have a love for Suffolk County. I have a love for being a prosecutor and doing the people’s work.”

Asked how he would serve the whole county, including the geographically remote East End, Mr. Tierney said he knows the region after spending many summer vacations in Montauk at his family’s bungalow, from his youth to the present day. “We know that the county line does not stop at Riverhead,” he said.

Mr. Sini, a Democrat first elected in 2017, touts his work with East End police agencies taking down a large narcotics ring operating out of restaurants and bars in Montauk, and busting a fake car-insurance scheme that targeted Latinx people here, among several notable cases. He also says he has reformed the D.A.’s office, investing in crime-fighting technology, advanced DNA tracking, data analysis equipment, and the training of new investigators and staff members.

A former prosecutor with the office of the United States District Attorney for the Southern District of New York, Mr. Sini also served under Suffolk Executive Steve Bellone as assistant deputy county executive for public safety. His appointment was short-lived when he was asked to be commissioner of the Suffolk County Police Department, following a top-level scandal in that agency. While commissioner, Mr. Sini said he started a body camera program, gang-eradication strategies, and diversion programs that help drug addicts get into treatment.

As district attorney, Mr. Sini established the Conviction Integrity Bureau, which reviews petitions from prisoners who believe they have been wrongly convicted. “It has been recognized by the Department of Justice as a national model,” he said, adding that “the work I’m doing is personal to me. Our goal is to make Suffolk County as safe as possible to live, work, and raise a family.”

Celebrate Hanukkah All Across Town and at Home
Stuffed With Turkey? Walk It Off
Blood Drive Tuesday in Bridgehampton
END_OF_DOCUMENT_TOKEN_TO_BE_REPLACED