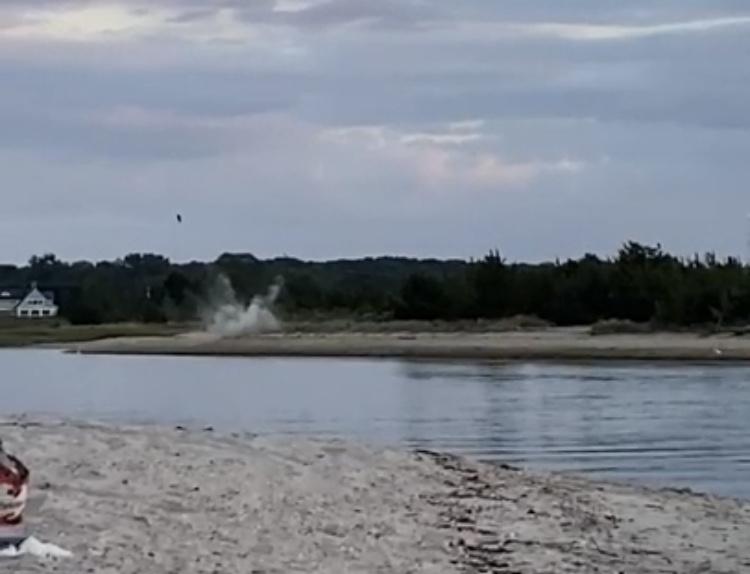 A 25-year-old Thomas Avenue man received ominous text messages via Whatsapp on Oct. 6 from someone who claimed to be “connected to a Mexican drug cartel” and demanded money or else his father would be kidnapped and tortured. Police assured the man it was a scam, and he blocked the number.

The East Hampton Town Police Department’s bomb squad was called in last Friday afternoon when an intact World War II explosive device was found in the sand on Sammy’s Beach. Three Mile Harbor was closed as the squad investigated the ordnance, reporting that it was ultimately “detonated and destroyed without incident.”

A man who was video-recording and photographing employees at Starbucks caused a disturbance there last Thursday morning after the baristas said he was making them uncomfortable. A supervisor asked him to stop and to delete the images from his phone, which he refused to do. As the supervisor called 911, the man reportedly said, “Call the cops, I’ll shoot up this place.” Two officers arrived to help control the situation, which resulted in the corporate coffee chain’s district manager saying it would “handle the situation internally.”

A Talmage Lane resident complained about after-hours landscaping being done at several houses on the street on Oct. 5. The call was made four minutes after 6 p.m., which is the cutoff time for such work, according to village code. An officer arrived just in time to see multiple landscaping trucks pulling away.

Later that night, a 50-year-old resident of Apaquogue Road called police when the electricity went out at her house, “concerned that the outage may be targeted at her house only,” according to a report. An officer told her that the whole neighborhood had lost power.

For the second time in four months, Julie Sweeney reported a potential break-in at the ice cream truck she parks at Ditch Plain Beach. On Oct. 5 at around noon, she arrived to find that a window had apparently been broken by a rock. Nothing was missing from the inside of the truck. The window was valued at $50, and Ms. Sweeney boarded it up with plywood.

It’s that time of year again when chillier weather brings a little more mischief under the bridge to North Haven. On Saturday morning, police noticed “a large amount of glass” there, and called in the Highway Department to take care of it. On Sunday, a passer-by reported seeing smoldering logs under the bridge, which police said may have been the work of a homeless person or people fishing under the bridge at night to stay warm. An officer used a fire extinguisher to put out the embers.

Village police received three calls about loud music at 136 Jermain Avenue last Thursday night. A party with outdoor speakers and flashing lights was in progress when officers arrived, and the head reveler was told to keep it down and take it inside.

The manager of Schiavoni’s I.G.A. had to call police twice on Oct. 5 to report two men who stole drinks from the refrigerator in aisle four a few days earlier. One took three Synergy kombucha drinks and the other drank a Remedy Organics smoothie while shopping in the store and left without paying for it.

Settling in to do some gardening last Thursday morning, a Squaw Road mother removed her wedding and engagement rings and placed them in a planter on the porch steps for safekeeping. Her young child then became “fussy,” according to a police report, and she took the child in for a nap, forgetting about the rings. When she went to retrieve them that night, they were missing. In the interim, both FedEx and UPS delivered boxes to the house, and the woman provided the packages’ tracking numbers to police for possible inquiries with the shipping companies.

Later that day, a 42-year-old Springs man reported his two fishing rods had been stolen from his 30-foot Jupiter center-console fishing boat, which was docked at the Clearwater Marina. Police have no leads on the theft.

A Knoll Lane resident who has been an outspoken critic of East Hampton Airport told police on Oct. 5 that his “Close the Airport” road signs, which he placed in various spots across town, have been disappearing or damaged. He believes the culprit is driving an “older model” tan pickup truck with white stickers on the rear bumper.

The management of the Clubhouse on Daniel’s Hole Road called police on Saturday to report a gray Jeep that had been parked there since Labor Day weekend. The owner of the vehicle was contacted. An officer said he’d give the owner “a few days” to retrieve it before calling a tow truck.