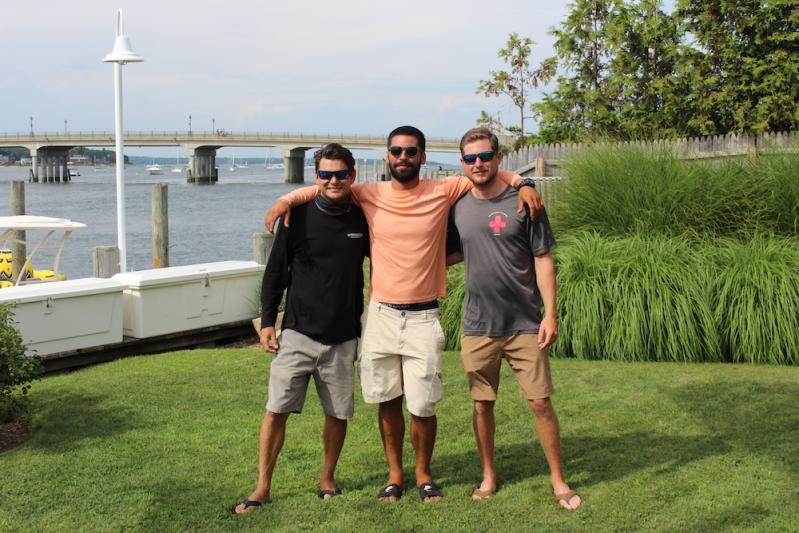 Update, July 30, 11 a.m.: Several people called 911 on Sunday after watching girls who could not swim struggling in the water near the North Haven side of Sag Harbor Cove. The adults who went in after them also needed saving.

"One of them probably thought she would cool off to her waist," said Police Chief Austin J. McGuire, but she lost her footing and was swept away. When she began yelling and flailing about, the other girl jumped in to try to save her, but found herself in the same predicament. "The current rips there. It's shallow right off the beach, and all of a sudden it just drops off," the chief noted.

A 31-year-old man, likely a family member, ran in after them, attempting to help both girls, but he too got in trouble quickly. Chief McGuire cited deep waters where boats pass through, the "nasty current," and "the fact the girls couldn't swim" as contributing factors. A Southampton Town police lieutenant, Susan C. Ralph, later confirmed that a strong current had picked up all three.

They heard the commotion at the Cove Marina nearby, and several people sprang into action to help. Though police initially said two girls and the man who tried to rescue them had been in trouble, rescuers on the scene said the emergency had involved three girls, their two parents, and one other man, who all jumped in, one after another, to save the girls. All six people were unconscious, floating face-down in the water, when help reached them, said Nate Hochstedler, Cove Marina employee, and one of the rescuers.

Police arrived at the scene only after everyone was conscious and out of the water, Mr. Hochstedler explained. He said that including the three responders who came close to drowning, nine people almost died.

Along with Mr. Hochstedler, two boat owners, Riccardo Pavoncalli, 60, and Robert Anderson, 45, and a captain, Angel Mesa, 23, leapt into action. One jumped into a dinghy, one onto a Jet Ski, the others into other craft. Police credited the four with putting themselves very much in harm's way as they made their way to the distressed swimmers and brought them safely to the beach.

Witnesses on the opposite shore saw the rescuers dragging the three victims to safety on the North Haven side.

Frederick Friedman, a bystander and local boater, gave CPR to the unconscious girl and man, who regained consciousness by the time help arrived. "Some good Samaritans took in a lot of water and were vomiting up water," Chief McGuire said of the rescuers from the marina. "We could have had a tremendous tragedy, and thankfully we didn't. Those guys are really heroes. They went above and beyond."

The entire scene played out in the course of five minutes, police said. Responding along with Sag Harbor police were the harbormaster, Sag Harbor firefighters, emergency medical personnel, two Southampton Town officers, and a Southampton bay constable. East Hampton Ocean Rescue had been called, but was notified that all was under control.

Ambulances from Bridgehampton and East Hampton took two girls and the 31-year-old man to Stony Brook Southampton Hospital for evaluation. All were released after treatment.
--
Note: This article has been updated since it originally appeared in print after a man involved in the rescue provided additional details to the reporter, including the fact that more people had been in distress than initially reported.