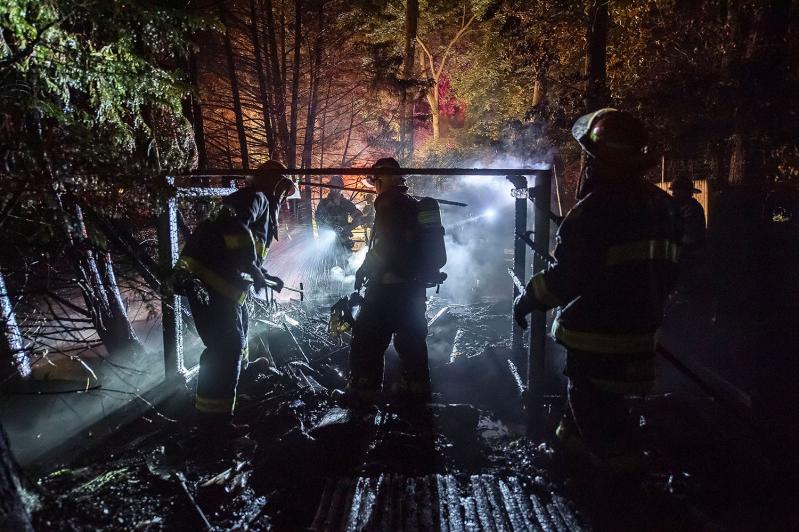 Shortly before midnight on June 17, First Assistant Fire Chief Duane Forrester arrived at an East Hampton property where there had been a report of a fence ablaze. When he got there, the situation turned out to be a lot worse.

A storage shed was enveloped in flames, and the fire along the fence was creeping dangerously close to a parked car nearby. But what really stood out were towers of fire shooting 30 feet into the air from two propane barbecue tanks next to a house on the Cove Hollow Road property.

The Independence Day holiday is usually when grilling specials appear in supermarket flyers and are displayed prominently at appliance and hardware stores. This year, without community fireworks shows, backyard gatherings might be just about the only way many people celebrate the Fourth of July. This makes Tom Baker, the assistant chief East Hampton Town fire marshal, nervous.

In recent weeks there have been at least three house or garage fires at which ordinary propane tanks have presented a danger to firefighters, Mr. Baker said in an interview. The one on Cove Hollow Road was one of them.

At another recent East Hampton fire, a burning pool heater was found next to a shed that contained five propane tanks lined up near each other.

Indoor storage of any kind is a very bad practice, Mr. Baker said. All tanks, whether full or empty, must be kept outdoors, upright, and out of the sun. They should be far away from windows, especially basement windows, doors, cars, electric meters, and air-conditioners, which can all cause a spark. When they are not connected to a grill or other appliance, they should remain capped.

Labels should be removed, he said, because condensation can form between them and the steel tank, encouraging rust.

Where there are children present, Mr. Baker recommends securing tanks with a lock and cable. Commercial propane users, such as caterers, should keep tanks in locked cages, he said.

"Propane is the most volatile and most reactive, way more than gasoline," Mr. Baker warned. "It's a bomb."

Not only barbecue grills use propane; it is the fuel in patio heaters, mosquito attractors, and for cooking and heat in recreational vehicles and boats.

To a large degree the danger propane represents comes from two characteristics: It is invisible to the human eye and is heavier than air. A leaking tank can cause a pool of gas to accumulate where an errant spark could cause a catastrophe.

Mr. Baker described arriving at the site of a gas leak alarm on a hot, humid, muggy day, where propane had mixed with the air vapor to form a waist-deep mist across the lawn. "It was one of the eeriest things I have ever seen," he said.

He said one risk to residents and firefighters is when propane tanks are inside a shed or garage that also contains pool chemicals, fertilizer, or gasoline-powered yard equipment.

As for grills, Mr. Baker recommended that they be moved away from any combustible surface before being lit. "They have wheels for a reason," he pointed out.

Other gas grill musts: Keep a working fire extinguisher nearby, or at least know where one is, and always have the cover open when lighting one. Keep the grill clean and in good condition, he said, describing a scenario in which dripping fat ignites atop a tank. "It is very important to get them tuned up."

An inexpensive way to check for leaks is to spray some window-washing fluid over the tank and connections. Mr. Baker suggested Windex.

In the winter, when the grills are put away, the tanks stay outdoors in a shaded spot, perhaps placed off the ground on wooden pallets. They should never be kept in basements, he warned.

The bottom line, Mr. Baker said: If the smell of gas is noticed, get away from the source and phone 911.

Some propane suppliers and hardware stores will accept old tanks that can no longer be used. They can also be left at public waste transfer stations, where they will be stored to be disposed.

Fire safety offices in most communities would be happy to answer questions about safe propane use, he said.