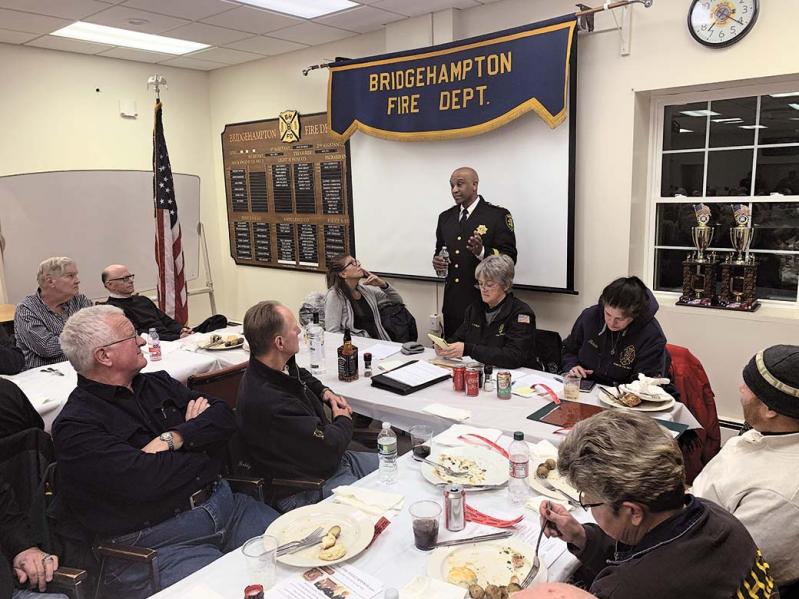 “Hopefully our Legislature will change this horrible act,” Suffolk County Sheriff Errol D. Toulon Jr. told members of the South Fork Fire Police as he spoke to them about amending the newly implemented bail reform law at the Bridgehampton Firehouse on Tuesday.
Taylor K. Vecsey
By Taylor K. Vecsey

A new group called the Common-Sense Coalition, made up of officials representing Long Island government and law enforcement, has been formed to recommend changes to New York State’s controversial bail reform law. Suffolk County Sheriff Errol D. Toulon Jr. is among the members.

The coalition will present proposed amendments to the newly implemented Criminal Justice Reform Law, which includes the elimination of cash bail for misdemeanors and “nonviolent” felonies, to state lawmakers.

In an announcement on Tuesday, Nassau County Executive Laura Curran was joined by Mr. Toulon and other officials, mostly from Nassau, ranging from the county’s police commissioner, Patrick Ryder, to its sheriff, Vera Fludd. The committee plans to submit a list of proposed amendments to state legislators as early as this week.

“It’s about common sense, not politics. Our number-one concern is the safety and security of our communities,” said Ms. Curran, a Democrat. “Many of us have been in discussions with members of the State Legislature about changes that would improve the new laws, but it’s important that as officials in charge of public safety on Long Island we speak with one voice.”

His office, which runs the jails in Riverside and Yaphank, recently had to release 301 inmates, 41 of whom were gang members, under the new law. “Jail is sometimes the place they can get the help they need,” Mr. Toulon told members of the South Fork Fire Police at a meeting Tuesday at the Bridgehampton Firehouse. Once released, he said, “they are not going to get the help they need and they are going to commit another crime.”

Lawmakers from both parties have indicated that there is room for appropriate changes to the law. Several bills aimed at repealing various aspects of it are pending. Gov. Andrew M. Cuomo, a Dem­ocrat who pushed the historic reforms through last year by including them in the 2019 budget, said Tuesday that he was willing to re-examine the controversial legislation.

“Hopefully our Legislature will change this horrible act,” Mr. Toulon told the group.