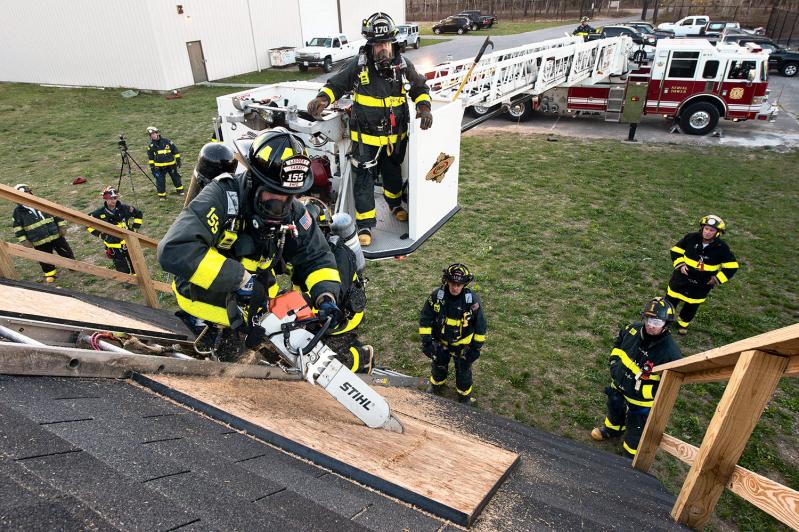 At a training facility in Wainscott that includes a classroom and indoor and outdoor props, firefighters can practice for maneuvers used during a blaze, such as how to ventilate by cutting a hole in the roof.
Michael Heller
By Christine Sampson

Gov. Andrew M. Cuomo on Monday signed legislation that will create a state task force on recruitment and retention of volunteer firefighters, but it came as surprising news to at least two local fire department chiefs.

The legislation, co-sponsored by Assemblyman Fred W. Thiele Jr., directs the state's Office of Fire Prevention and Control to bring together key individuals from across the state to study the issue and come up with recommendations.

"Now, more than ever, we must ensure that every effort is being made to strengthen our volunteer fire service by establishing better practices and new techniques to encourage new members to join," Mr. Thiele said in a statement.

East Hampton Fire Department Chief Gerry Turza said on Monday that he had been unaware of the state's efforts before Governor Cuomo signed off on the task force. Chief Turza happens to serve on a similar committee organized by Suffolk County's Fire, Rescue, and Emergency Services agency.

He suggested that the state task force will have a challenge ahead of itself in examining the particular issues that East End fire departments face. The problem here isn't so much coming up with new ways to attract and retain firefighters, he said, but rather addressing the social and economic issues that stand in the way of keeping the firefighters they already have and attracting new ones to succeed older members. Affordable housing is the most pressing issue, he said.

"I think the intent is very good," Chief Turza said. "We've looked at this problem for a very long time. . . . More eyeballs on the issue is a good start. It will be interesting to see what happens. Obviously we welcome any type of effort by our politicians to shed some light on this issue."

East Hampton has a roster of 195 members, with about 145 of them active. "There are people who want to do the job, but they're already working two or three jobs just to try to make ends meet," the chief said.

Sag Harbor Fire Chief Steven Miller also said he had not heard about the task force legislation until after it had been signed. "Anything right now will help all the departments, as we are having a difficult time finding volunteers at all levels," he said.

Chief Miller recalled a Sag Harbor Village Board meeting earlier this year in which community leaders, business owners, and residents came together to brainstorm about attracting and keeping more firefighters, and emergency medical personnel, too. "Everyone came to basically the same conclusion. It's a vital part of the community, but we're missing the housing aspect where nobody can afford to live here."

Mr. Thiele noted in his announcement that "the steady decline in the number of individuals willing to join the volunteer fire service and the current public health crisis has further exacerbated the need to attract the next generation of volunteers."

Without paid firefighting positions in most of the state, volunteers "serve an important function" in their communities, Mr. Thiele said. Facing similar life-and-death challenges, many local ambulance companies have established paid paramedic positions. When asked if that might be the case for firefighters, too, Mr. Thiele said it is not a foregone conclusion.

"I think the goal of the task force is to find ways to encourage more volunteers for the fire services," he said in a follow-up email. "The failure to increase volunteerism will ultimately lead to creating paid positions, but I don't see it as a focus of the task force."

Trees, Wreaths for Sale in Amagansett
Holiday Cheer Is Coming to Sag Harbor
Even More Thanksgiving Options From the Pike and Old Stove
END_OF_DOCUMENT_TOKEN_TO_BE_REPLACED