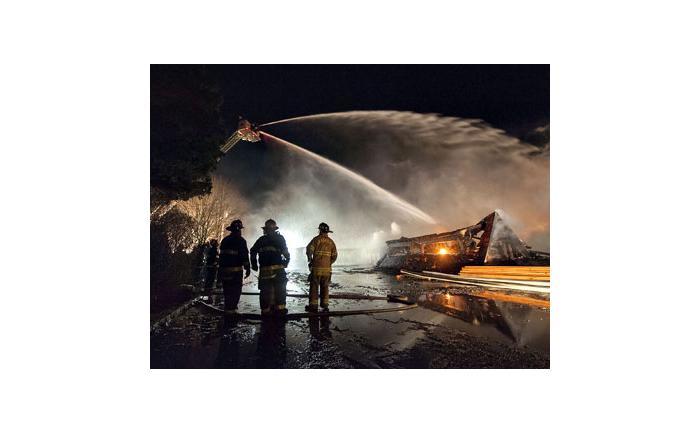 The East Hampton Fire Department’s aerial ladder company sprayed water on a house at 119 Miankoma Lane in Amagansett during a fire before dawn last Thursday morning.
By Taylor K. Vecsey

Police detectives are taking the lead on a suspicious fire that destroyed an Amagansett house and threatened neighboring houses in the early morning hours last Thursday. East Hampton Town Police Capt. Chris Anderson confirmed that the cause of the fire at 119 Miankoma Lane is under investigation, and police are working in conjunction with the East Hampton Town fire marshal’s office. Asked if that blaze was related to arson at a house in Bridgehampton, which took place on Saturday, about 48 hours after the Amagansett fire, and culminated in the arrest of a Sagaponack resident, David Osiecki, who was also charged with setting a brush fire in Bridgehampton on Friday, Captain Anderson said the department is considering all possibilities. “We are acutely aware of his activities and are taking them into consideration during the investigation,” he said yesterday morning. Very little is left of the Amagansett house, and investigators have been digging through the wreckage ever since. All that is visible are three chimnys and a scorched Mickey’s Carting container in the front yard. The Amagansett Fire Department was called to the blaze last Thursday at 1:43 a.m. Chief Dwayne Denton said he arrived on Miankoma Lane within six or seven minutes of the call and found that the house, believed to be under construction, was already a total loss. He suspects the fire was burning for four or five hours before it was reported to 911 dispatchers. No one was inside the house at the time. “It was fully involved. I don’t just mean the flames coming through the windows. It was a big ball of flames,” Chief Denton said. “Within six to eight minutes, the house collapsed into the foundation.” “My biggest concerns were the houses across the street and next door.” The wind was blowing from the east, and the embers were blowing over onto the neighboring lawns and roofs, he said. Firefighters had to wet down the surrounding houses, which are 50 to 75 feet apart, according to the chief, to keep them from catching fire. In fact, embers gathered on the roof of the house across the street, at 122 Miankoma Lane, and set it ablaze, burning a small hole in the roof, the chief said. “Very fortunate my guys caught it.” There was no one at that house either. Water proved to be a challenge. The flow from a hydrant on Miankoma Lane was described as a dribble. “The mains there are old. There was no water pressure. So we went down to Main Street and got good water supply there,” Chief Denton said. When the East Hampton Fire Department’s aerial ladder and engine arrived, he had them lay a hose from Bluff Road, which also supplied good water pressure. Suffolk County Water Authority workers were on the block last Thursday afternoon checking the supply. The water authority is investigating the matter. Three other fire departments assisted Amagansett last week. An engine from the Springs Fire Department stood by, and the rapid intervention team from the Sag Harbor Fire Department also responded. In all, about 70 to 75 firefighters responded. Many remained there until 4:45 a.m., with the chiefs staying until about 6 a.m. No injuries were reported. East Hampton Town records show that 119 Miankoma Lane is owned by David R. and Andrea Reiser.