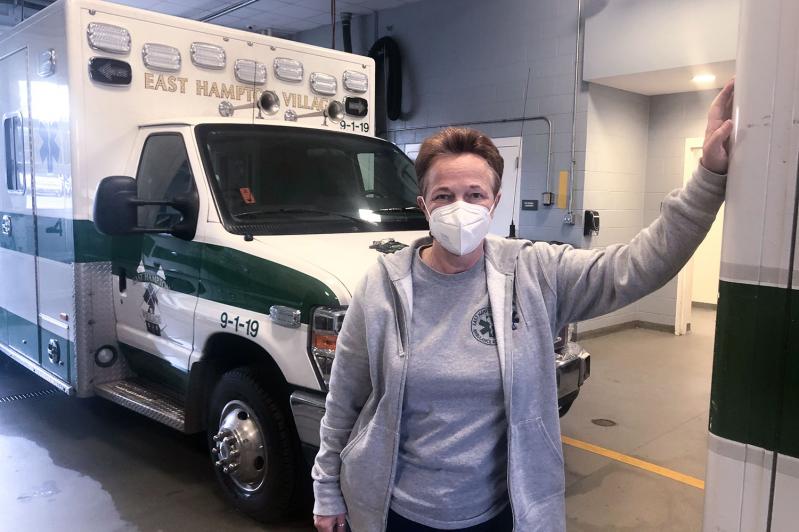 East Hampton Village Ambulance Association Chief Lisa Charde was at the center of the storm in 2020 as emergency calls soared and precautions for avoiding Covid-19 transmission among staff and volunteers complicated everything.
Christine Sampson
By David E. Rattray

Lisa Charde is exhausted. For many people, 2020 has been challenging, but as the chief of the East Hampton Ambulance Association, Ms. Charde has led a team of volunteers and professional paramedics in harrowing conditions.

Ms. Charde is in her 22nd year as a member of the ambulance association and entering her third as its chief. She is trained as an emergency medical technician and a driver, both roles she has continued filling, as the need dictates. "Personally, as an E.M.T. and a driver, in the moment, that's what you are, but you're always the chief," she said.

"There are close calls, and when something goes wrong that falls on you." The chief does anything that's needed in addition to going on emergency calls, including paperwork for each time an ambulance rolls and coordinating with a rotating roster of hired paramedics, which can get complicated when there are multiple and concurrent calls for help.

Despite 2020 being what she said was the most dangerous year to be a member, seven new people have joined, and veterans have gone above and beyond. She noted that Tom Bock, Sheila Dunlop, and Paul D'Andrea have gone on more than 300 calls each, and Maria Diaz, who joined in 2017, has surpassed 150 calls.

Covid-19 has added innumerable wrinkles to normal procedures. E.M.T.s must protect themselves from possible exposure. They often have to explain to family members or friends of patients that they cannot accompany them to the hospital. "Don't go," she says, "you won't get in." This applies to emergency responders as well, who have to wait long minutes for a nurse to come out to the idling ambulance before a patient is admitted.

After hospital runs are completed the ambulances must be cleaned and made ready. Then there are debriefing calls via Zoom to be conducted. "There is Covid fatigue. You can hear it," Ms. Charde said.

"There is no safe place anymore," she said. On a recent call, a patient's relatives insisted that no one in the house had been sick, but when another family member arrived at the scene it turned out that the victim's spouse was hospitalized with the virus.

She said that many of the people being transported now did not seem to be what she would describe as locals. Ms. Charde went to public schools here and retired after 31 years working for the East Hampton Town Human Services Department. "These are not a lot of people that I am familiar with," she said.

Different, too, is that the usual off-season lull never arrived. "Usually after November, it's lights out until the end of February," Ms. Charde said. Putting in 60 hours a week at a minimum, "Once in a while, you get to make a pot of chicken soup, which I did today," she said. "You just keep your head down and keep going."

"It's funny, you think of the 1918 pandemic as a historical moment. You don't think it's going to happen in your time."